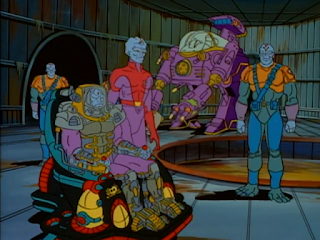 "I will not leave my capital. My new command post will be here, under the streets of Phaeton City. MY city!"

Night of the Traitor is the forty-first episode of Exo-Squad, and picks up where the b-plot Winged Fury left off. Marsala's body has been nabbed by the Neo Megas, who wish to use him to move Phaeton off the board. Phaeton is  degenerating, making irrational demands and making hasty decisions based on off-the-cuff remarks. Marsalla reluctantly agrees, largely due to Galba's sincerity, and uses his stealth e-frame to make the attempt. Meanwhile, Marsh rendezvous with the Resistance who also gets wind of Phaeton's bunker scheme and launch their own assault. During the confusion Lucullus and Gracchus make their move against Livia and Galba, but it proves premature. Phaeton uses his illness to grotesquely escape Marsalla and orders all of Neo Megas bar Galba executed. 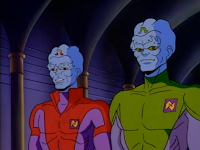 What Works: This is a terrific episode. The Megas have been a gun hanging on the wall for the more than half the season, so their sudden but inevitable betrayal feels earned. As far as I can tell, Lucullus and Gracchus are the only named Neo Megas to survive to this point in the story; the aides-de-camp to Draconis, Typhonus, and Shiva all perished, as did the scientists working on Venus. (Oh, I suppose Sulla is probably alive on Venus or Chaos, having no doubt cut some sort of deal with the Exo-Fleet.) In any event, using them as the villains works well. Introducing Galba as a sympathetic Mega is also a good move. Having him as front man calls to mind the 20 July Plot, and this one isn't any more successful. Though, of course, Lucullus isn't really interested in peace and merely wants to remove the dangerously unpredictable head of the Neo Sapien Empire so he can pursue the war more logically.

Along those lines, it's a little thing, but Gracchus points out how they should be making more Megas instead of more Warriors. "It is new technologies that will win the war, not brute strength." I think this was a necessary lampshading to a structural weakness of the show. 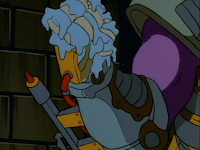 Phaeton is looking awful. He's following a stream-of-consciousness decision making process, making massive decisions based on whims, and even descends to self-pity at one point. "I have no life!" he roars when confronted by Marsala, his hand turning to goop. And yet, he maintains a level of shrewdness, echoes of his former genius. He senses betrayal in the air and acts accordingly, showing up in his e-frame for the first time this season. Using his illness to escape through a pipe is both disgusting and brilliant. And his obsessiveness helps him catch on to Lucullus' scheming... "Where is the body of the traitor Marsala?" he angrily demands of the Mega, who never imagined the tyrant would demand to see the corpse. Where would the logic be in that? I also love his hoverchair, in Neo Sapien black with the wreathed logo of his empire. 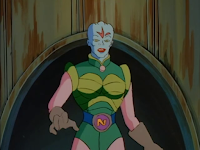 Livia is once again prominent this episode. I love how casually Phaeton threatens her with death, and her reaction and quick recovery. It's clear she's as uncomfortable around the Megas as any of Phaeton's other generals. I love how smug she is when she thinks Lucullus and Gracchus are in her power, having not quite kept up with current events as much as she should have.

It's a short scene, but I thought they did a good job of selling Marsh outing Turner, then managing to escape the Neo ambush. 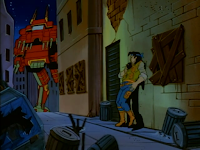 One of Phaeton's (objectively awful) decisions is rounding up and removing all Terrans from Phaeton City. Not only does that remove his labor force, but it deprives him of three million hostages. At this point, should the Terran fleet achieve orbital superiority, there's little to stop them from blasting the city to atoms from orbit. The chaos also tips the resistance, in the form of the graffiti artist (who gets a name here, Picasso-told you he'd be back) to Phaeton's role in overseeing the  construction process in the sewers and the vulnerability that entails. Oh, and dig the enormous red Neo e-frame making one last appearance. 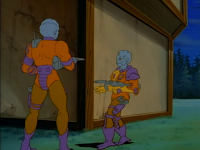 It's a little thing, but I love how all of the guards on Manitou Island (Should that be Maniton maybe? I can't find anything about Manitou island online and generally Exo-Squad is good about using real places) are Neo Megas. It makes sense that they'd want to keep their conspiracy "in house." (But see below) 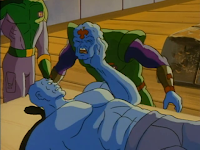 I also like that having nothing but Neo Megas around makes them vulnerable to the physically superior Neo Sapien Marsala. He tosses Galba around like a sack of flour and easilly overpowers the guards. Only Galba's words stop him. 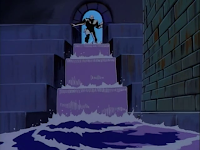 Finally, the title works very well. Night of the Traitor... but who's the traitor? The story abounds with them. Lucullus, sure, betrayed his lord & master Phaeton. But Marsala, too, betrayed his genetic heritage by siding with the humans. Phaeton calls him on the irony of the tables being turned, the reverse of the situation from fifty years prior. Livia is accused, falsely, of being a traitor by Lucullus, but then had their scheme succeeded history wouldn't have been any the wiser. Turner, of course, is a traitor to humanity and the resistance, though he's a bit player. Galba is arrested as a traitor, and indeed he stands not with the Neo Megas in their agenda but with humanity as a whole. And last, but not least, Marsala accuses Phaeton of betraying his own cause. As I said, plenty of traitors to go around. 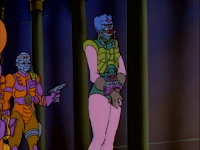 What Doesn't: Only a bit. After Lucullus and Gracchus spring their trap, Livia is not immediately shot but instead chained and gagged. That just seems like an unnecessary risk for them. She knows the truth. (Still love that scene. "Gracchus has a list of those who are disloyal," is such a great line for all it implies and the economy with which it implies it.)

The Resistance attack feels like a largely unnecessary beat. It doesn't move the plot forward, nor does it succeed. 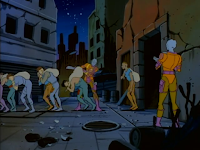 Just an animation flub, but when the Terrans are being rounded up, it's Neo Mega guards doing the rounding. I'm sure they just had a prominent model for Neo Mega guards so used them by mistake, but it really should be ordinary Neo troopers doing this. It's nice imagery, though; the rounding, not the Megas.

Watch For: Phaeton's Bunker will be an important plot element for the rest of the series. It naturally calls to mind Hitler's Führerbunker.

The episode opens with the Neo Fleet in orbit. It's not what it once was, but it still looks pretty potent. That won't be the case in just a few episodes. I composited a few frames together to make this shot, though the actual pan is much longer. I just couldn't use it due to title elements. 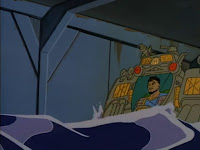 During the pointless Resistance attack, we see two prominent new e-frames. One is piloted by Jinx Madison. It's based on his new (at the time) Fire Warrior e-frame, though it's not all that different than the other frames we see. 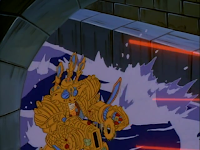 The other, though, is decidedly odd. Peter Tanaka has a Samurai E-Frame toy, and yeah, it is pretty goofy. I actually had both back in the day, really just because I was a completionist about the figures. I don't know as if I ever used the frame itself.

Bio: Wolf Bronsky, a character not in the episode. It's not especially insightful but it's a little funny and it's all new animation. Besides, Marsala's has run several times already and Phaeton never gets one, and they're really the only viable candidates.

Overall: Very strong. The only real criticism is about the pointless resistance attack. Everything else is a nitpick. The episode ends on a rather ominous note, with Marsala pointing out that Galba, Lucullus and himself all agree that there can be no peace with Phaeton in command. "He wants to be destroyed. If he can, he will take this entire world with him." Not a cheerful thought, but it definitely helps propel the story into the endgame.
Posted by Jimtron at 9:00 PM

Phaeton must have been inspired by Alex Mack (Larisa Oleynik), the girl who could turn to liquid nuclear waste after an accident with industrial chemicals.

I would like to know the official name of the gigantic Neo e-frame. When it first appears in Hidden Terrors flying alongside other Neo e-frames, that's the only time you see the whole vehicle. It's vaguely shaped like a kaiju.

Was this episode also the first appearance of Chicago Resistance member Voodoo? The black guy driving a gray DeLeon e-frame.

There is both North and South Manitou, located in Lake Michigan.