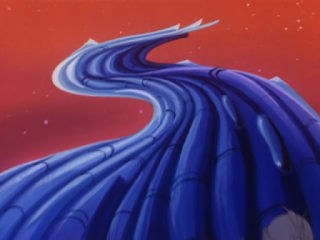 "We are like ants fighting on an anthill, unaware of the vast world around them!"

Call of the Unknown is the thirty-eighth episode of Exo-Squad, continuing the Return to Mars storyline. Marsh and co breach the alien artifact with a Solar Pulse from Marsh's frame, but not before coming under fire from Typhonus. Typhonus blows his way in to pursue them but their firefight is complicated by "antibodies" from the oddly organic-looking structure that disintegrate (or teleport or otherwise disappear) anything they touch. Their fight causes the structure to grow an enormous tower in the Martian wasteland, a tower which sends out an enormously powerful pulse felt at least as far away as Venus. As Marsh and his Jump Trooper reinforcements look on in bafflement, Algernon observes that it's a radio transmitter. 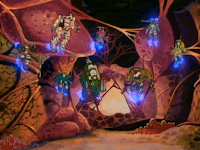 What Works: The alien structure. This is important, since this whole plotline basically hinges on it. Plus, (spoiler alert) set-up for the aborted Season 3. It feels like wholly new technology, bio-tech. One wonders indeed if this isn't technology at all, but some kind of vast slumbering organism living below the surface of Mars for a purpose inscrutable. 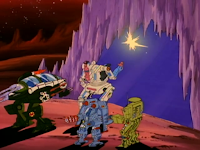 It does feel like the heroes have to work to gain entry. They spend quite a bit of time analyzing, fiddling with, and shooting at the "door." The Solar Flare (called a Solar Pulse here, but ah, well) does the trick. The Neos, on the other hand, just blast their way in, but with the resources of an entire planet at their disposal it seems fair that they could quickly come up with enough conventional explosives to do the job.

They do a good job of selling the pulse at the end of the episode. It starts off with the combatants around the newly-grown structure, sure. Hits Torres at Olympus Mons, ok. Hits the Arnheim in orbit, check. Then off to Earth, and Phaeton, and finally Venus, with the Exo-Fleet in orbit. Each time there's no appreciable diminishing of intensity. If they're trying to convince me that this is going to summon something from outside of the solar system, mission accomplished. 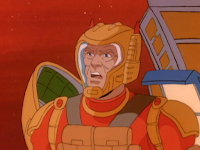 Algernon is mostly great in this episode. I thought the bit with the "I invented the code" was a bit much, but I love his intensity, his hunger at the prospect of getting his hands on alien tech. Oh, and his new, presumably toy-friendlier design works for me too. This is the only time we'll see him in full jump-gear, but him in his vest and jeans will regularly show up for the rest of the show. I remember that there were plans for a Winfield and a James Burns jump-trooper-style figure, but it makes sense to me that that's why he got his new outfit. It's a shame we never got those toys. He also exhibits a great mix of his cowardice and bravery all at once. When Butler calls for a retreat, he insists that he can't abandon his equipment. All well and good, but his voice is cracking all over the place as he says it. An instant later, the decision is taken from him when the Neos blow it up. 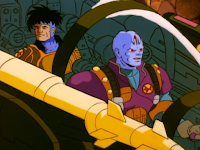 I like that, for once, Takagi uses his holographic decoy and it's the real bird that gets shot down. Had to happen sooner or later, right? Though I suspect it was to keep him from having what is essentially a jet inside an enclosed structure. I liked him playing gunner for Marsala.

Typhonus quickly grasps the military significance of the discovery, informing Phaeton and ordering "every available e-frame on the planet" to converge. Sadly for him, the pulse is going to shut that order down before it gets started. It makes sense he'd press his advantage. As he aptly observes, if it's on Mars, "it belongs to the Neo Sapien Order." Certainly the Exo-Fleet would be hard-pressed to contest it. 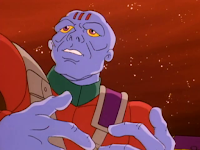 There's some good body language in this episode. When asked what might breach the alien structure, DeLeon just gives a little shrug. Ixion looks at the growing tower with horror, perhaps more aware than anyone besides Algernon what it might portent. And random Neo soldiers look on with apprehension in the moments before the tower erupts from the ground, clearly sensing that something is awry but unable to articulate exactly what. It's all very well done. 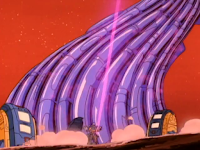 And speaking of the tower, its growth is pretty neat. I also love the metaphor of Jump Troopers landing on it even as it continues to grow. We certainly are a violent species, aren't we?

I like the little knock on the helmet Longfeather gives O'Reilly. It's a nice touch, not overdone. 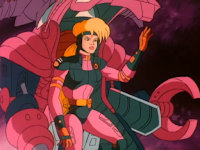 What Doesn't: Burns gives up her E-Frame without any appricable reluctance. It feels wrong, especially since she's the nominal squad leader. But that plotline has been dropped.

The jump sequence seems to take way too long, feeling like padding in an episode that's already fairly jam-packed.

Maggie gets hit with an antibody and it doesn't seem to effect her. This might be showing that they are unable to function in the new chamber they've fled to, but it's a weird scene. On the plus side, DeLeon's reaction to it nudges their relationship forward just a hair.

I think we cut to Algernon and Butler in orbit about once too often. We get that they're up there, waiting, we don't need to keep seeing it. 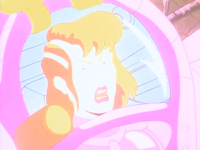 Watch For: Baker Squad watch: One casualty. Henshaw in a Bronski-frame is the first casualty of the antibody systems. Once again, only Kosari seems to care. By my count he should be down to one more, though they're terribly inconsistent in which they are. Based on this episode, I'd think it was another Napier-style frame. In previous episodes we'd seen a DeLeon and a Weston frame that never got toasted. (Hint: next episode it won't be ANY of those.) 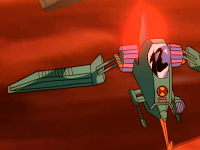 After Takagi gets shot down, he has a little glider that sets him down. Surprise! That's a toy feature his Exo-Wing had.

Overall: Exciting, but feels perhaps a tiny bit off. Most of the moments feel right, but the pacing doesn't quite work for me. Still, given the overall excitement and the importance of the storyline, I'm inclined to rate it fairly high. Probably we're in the B+/A- range on this one.

Thanks for the Baker Squad spotting. Poor Henshaw, she's only the second Baker member whose name can be put to a face but doesn't get any speaking part like Kozeri.

I like the way Kozeri took the lead in covering Takagi's descent after the latter got shot down. Too bad the other Baker members don't get any exposition before dying.

Watch out for the magically resurrected Exofighter in the next episode that changes colour!