Secrets of the Almanac II Revealed!

A while back, Bill Forster and I did a series of posts called Secrets of the Almanac. We went behind-the-scenes on all of book 1 and about a quarter of book 2 and shared our thoughts. I figured, with The Complete AllSpark Almanac just a few weeks away, I'd pick up where we left off. I'll just ramble on about what I remember, and especially anything that Chris McFeely missed in his excellent (and flattering) Annotated Almanac II. By-the-by, here is Part One of Secret of the Almanac II, and here are parts one, two, three, and four of book 1.

Page 19: Backing up slightly, Chris failed to identify the source of the number 65483-2483-32--It's from the show Flashforward, a case file that I parsed differently. This might have helped Chris with the source of a number on page 64. This starts the trend of most of what Chris missed; they were visual references that couldn't easily be googled. Note that this number is actually online now because some has transcribed the episode! I also accidentally used the number twice, because I used Chris' own annotations to help decide what I'd reference in the Addendum.

Page 64: The Yatter page! I tried to sell Bill on this idea and he was highly skeptical. He couldn't visualize it. So I went ahead and mocked it up and he got it immediately. I cannot read this page without laughing out loud, and it's rare that my own work can do that to me. The number 64 was also a reference to Flashforward, the 137 seconds they flashed to the future.

Page 76: The garage sale sign is lifted from Ghost World. I also thought it was funny how many dead dogs have accumulated in TF lore. 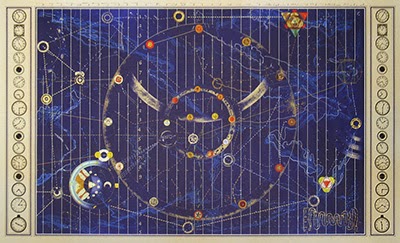 Page 80: The Astroscope graphic is the map from Time Bandits. I also was privately amused that the numbers of the months don't synch up properly, just as in the Gregorian calendar.

Page 88: I was lucky there was a model with Prowl with his arm in a sling. On the one hand, I didn't want to not include him. On the other, I hate reusing models. This saved me the trouble.

Page 89: I would love to have made the background image larger, perhaps the entire width of the page. But I also couldn't see giving these guys two pages. I had fun declaring that they were called Rock Lords.

Page 90: There was an awful lot of Space Bridge junk with models. I thought using them here was a rather elegant solution. It was also a slick way for me to get Swindle's chest model into the book.

Page 93: The box of the Ninja Gladiator game is strongly reminiscent of the old NEC game boxes. I kind of messed up when I declared the monster from Destro's castle to be named Ssslither, as there was ALREADY an Inhumanoid with that name. Whoops!

Page 98-99: I love that movie-Skids suffers the same fate as Marvel UK Skids, with a parasite attached to his head. I'm also rather fond of Bill's take on Astrotrain and Overlord. As noted, I drew heavily on my real-life knowledge of World War II, specifically the Pacific Theater, to plot our the events of the war. I had a tiny bit of help from Marty Isenberg on this one, specifically when I asked for help reconciling the ideas that the war was won by: 1) hiding the AllSpark; 2) building space bridges; 3) Project Omega. I love the visuals on these pages, they're overall probably my favorite bits of work by Bill.

Page 100-101: These were my "and the rest" pages. Shockwave I PROBABLY could have given a full page to in the new colors, though I'd have needed to update his bio. Otherwise there were these odd designs and not all that much room on the episode guide pages to showcase them. I love Derrick's Blackarachnia sans-helmet.

Page 106: Derrick drew all these guys up and I had no idea what to do with them. I hit on the idea that they might be advanced automatons, which seemed to resonate. Derrick DID have me take out a line about them not having sparks, wanting to keep his options open.

Page 112-113: The star map! This was a pain to put together. I also made a version where there isn't space for the gutter to use as a print. At one Auto Assembly Simon Furman attempted to buy one off me and I had to inform him that his money was no good with me and gave it to him.

McColamo was the planet from Spotlight Drift, which is referred to as a "free trade zone." I asked Shane if he had any thoughts as to names and he didn't, so I wound up naming it for the creative staff. (McCarthy, Coller, Lafuente, Mowry)

Did anyone notice that the Beast Wars Neo planets were strung out in episode order? I was trying to track the journey of the Gung-Ho. Note that there's an episode where they go back to the first planet and then start in a new direction, and that is also covered here. Also, Gaia was a nod to BW II/Neo, not The Foundation series. (Though it's a generic-enough name that they were all drawing from the same source material.)

I am also slightly disappointed that my attempts to merge the three Planet X that we'd previously encountered in Transformers lore didn't work. I didn't see any reason they couldn't all be aspects of the same place and wrote it accordingly.

There's a bit of info about the Morthrai system from War of the Worlds. I was attempting to, in my own mind at least, reconcile what we knew of them. We knew the planet was called Mor-Tax. We knew that the aliens in S1 called themselves Mor-Taxians and in S2 called themselves Morthren, from Morthrai, but they were supposed to be the same species. We knew they'd encountered the Quar-To before, but also that the nuclear explosions in Japan informed them for the first time that there was "life outside their system." I took those disparate facts and this is what I came up with.

Dendron Beta... I got nothing. I don't remember what I was referencing. I'm sure it was a pre-existing planet, because if it was supposed to be a name for someplace we'd already met I'd have given a clue. I might have included a typo. Perhaps it'll come to light at some point, or I'll remember. X2 I think might have just been a screw-up on my part, a vestigial remain from before I decided to try to merge the three disparate Planet Xs into one. But, if you like, call it a reference to the game Mega Man X2, because my original idea was to have X, X2, and X3 (with appropriate text nodding to both the TF and to Mega Man.) An idea that got lost in translation. Or maybe it's just a smudge on the screen.

Page 121: I did some extra drawing on the Arcee head model because I wanted her wires to run off the page. I think it came out rather seamlessly.

Page 123: Powered Convoy was another late-addition model from Derrick that I had no idea what to do with. I figured that, if he had the Magnus Hammer, he must be a Magnus. Javier Reys gave him a new head based on RID Ultra Magnus. 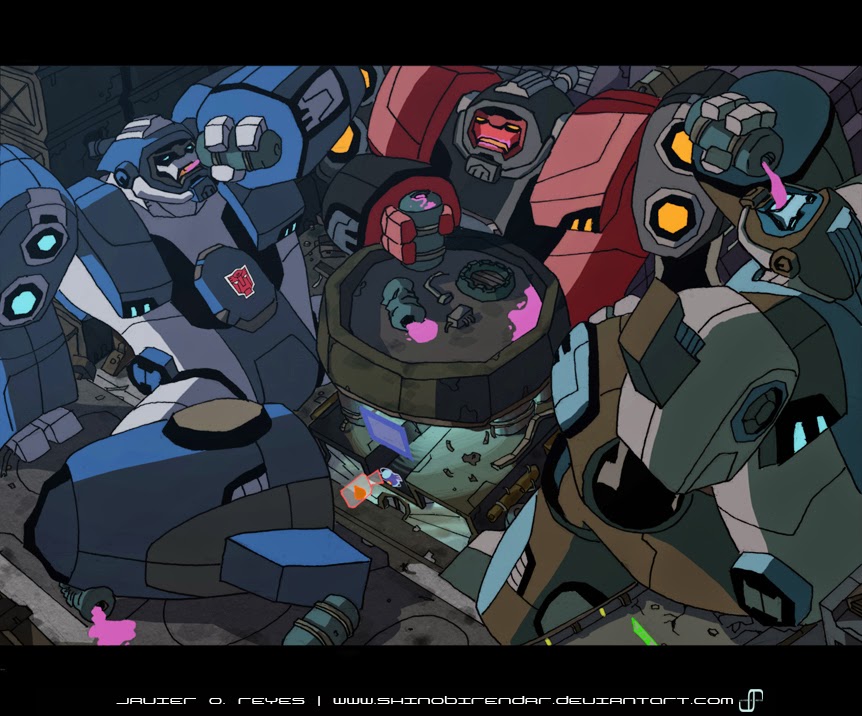 Page 124: Maccadam's, open, never shows up in the episode. I was surprised when going through the PSD file for it that there was a version that wasn't all boarded up. Javier did a commission that showed Omega Sentinels drinking on the rooftop of the building that came out rather nice.

Page 135: This was another case of having an awkward amount of material, in this case 1.5 pages of Burger Bot stuff. I thought the placemat was a rather playful solution. I messed up on the first female President of the US though, as there already was a canon one.

Page 137: I was happy to be able to acknowledge the hard work Chris put into annotating the first volume. Bill did a nice job on the script I thought.

Page 140: I like how aghast Kremzeek Prime looks at all his multi-colored knock-offs.

Page 144-147: We had TONS of Omega Sentinel models to play with, and were having a very difficult time presenting them all and making them look visually interesting. Bill came up with the idea of having this bit of the story told from Shockwave's perspective, and having the various filecards be callbacks to Transformers catalogs and bio cards of days yore. We since learned that some of the information here doesn't gel with what Derrick had in mind for the story, so look for the pages to be slightly recontextualized in the collected volume.

Page 154-155: Kurisama did an amazing job on these pages. Simply amazing. Oh, and did you notice, it's done up like a G.I. Joe blueprint from the 80s?

Page 158: I love that I had a reason to write the word "Khaaaaan" in the book.

Page 159: This was another image that I had no idea what to do with. I believe using it to break Part 1 from Part 2 was Bill's idea.

Page 161: Back when I was doing the first book we had a page with the transformation sequences of the Autobots. We didn't have Ratchet's sequence at the time and we had to use Starscream, which annoyed the hell outta me. I was happy to find it and be able to use it here.

Page 162-169: I have a funny story that I'm not allowed to tell in public about these pages. Get me a beer at a con sometime if you'd like to hear it.

Page 171-181: Most of the preproduction drawings that I had no idea how to use wound up here.

Page 182: I love the Sentinel Magnus design and wish we could have seen it Animated. Marcelo did it justice, at least, in The Stunti-Con Job.

Derrick made sure that we labeled the designs for the S4 Autobot line-up a "Hasbro concept illustration" because he hated them and didn't want people thinking they came from him.

Page 184-189: It's incredibly unusual for Hasbro to allow this kind of material to be published, and I remain humble and grateful that they chose the Almanacs as the right venue to share them with the fandom.

Page 190: The box art for Dirge and Cliffjumper were another case of having material and not being sure where to shoehorn it in. I thought it worked well in this context, though I wish we could have gotten them on the same page as the toys themselves.

Page 193: I love how Bill made the occasional toy head pop in from a corner, Grimlock in this instance.

Page 222: Ah, the infamous timeline. We'll address this in the collected volume as well. It came about because of a throw-away line in Blasts from the Past, about the Transformers being ten BILLION years old. Marty gave me some hints, "an unceasing cycle of ever-escalating war," and I ran with it.

There you go! I'll see if I can't go through the 22 or so pages of The AllSpark Almanac Addendum before the combined volume comes out.
Posted by Jimtron at 6:38 PM

Awesome, been waiting for this for a while, thanks Jim.

(You missed the two planets McFeely missed, though!