Post No Bills: Secrets of the Almanac (ONE) Revealed Part 2

Hello again. It’s me, Bill Forster. Plucky partner of one James M Sorenson. Bucky to Jim’s Captain America, Jason Todd to his Bruce Wayne, Comedian to his Ozymandias. ...wait a minute. Aren’t they all dead?! Let me try another analogy. Jim’s partner in crime. Heckle to his Jeckle, Han to his Luke, Kirk to his Spock. Yeah. That’s much better! Actually the last one is fairly accurate.

Once again I am here to talk about  The Allspark Almanac

(order it today!) . I am simply going through the book and giving random trivia and stories about each page as I remember them.  The AllSpark Almanac II

will be out this summer (preorder it today!) and promises to be even better than the first. So jumping right in...

Well left off with the Dinobots. That brings us to...

Page 44:
Arcee’s back was colored by Javier.

Page 48:
Here we didn’t use the standard character model, saving it for Shockwave’s page. Instead we used this real estate to put a similar image but one that demonstrated Longarm’s long arms.

Page 50-55:
We wanted Omega to look super big so we opted to not place any words on the page with him. Putting only the one picture of the ship mode on the facing page helped with making him larger than life. 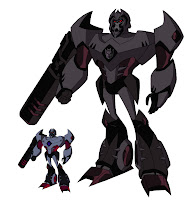 Here we have MOST of the different lighting effects used in the show. BB was the character with the most color changes. Unfortunately there is no “Flashback” color effect for him, since he didn't exist back then. Here's one now!

MEGATRON!
This drove me nuts! Originally I wanted all the layouts to have a title block and then directly underneath have the bio’s text block. But between Megatron and Lugnut I evenually gave in and moved the title blocks away from the bio in order to have a more evenly balanced layout of images.

Page 61:
Why is Blackarachnia the second Decepticon and not Lugnut or Blitzy? Page balance. We needed Megatron to be first and he ends on the left facing side of the book. Lugnut’s first two pages mirror each other so they needed to be across from one another and start on the left. Blitzwing starts on the right and would have fit, but he also ends on the left. Meaning we could not have Lugnut after him. Megatron, Blitzwing, Blackarach and then Lugnut seemed really odd. So Blackararachnia is second. When you make this stuff, so many little details are important. We spend hours on the craziest things.

We wanted to have just the spider mode on page one. The other pages were so well laid out that we had little room for it elsewhere. As I stated before we hate doing a design element only once, so we revisited the Bulkhead pages and made his first page a similar layout. That worked even better for him. He is huge and it is hard to fit all his designs and still have a nice over all flow to the page.


Page 76 -77:
Jim wrote this page. If you know Jim, then you know that he and Swindle share a lot in common. Originally Swindle was just one page. But Jim insisted that we have every single weapon we could displayed. Derrick is a big Swindle fan too. When we would go to his office at Cartoon Network he would have an army of Swindles in various colors lined up along his desk. Or course it’s actually really hard to see Derrick’s collection as it is so immense that it becomes like a Monet painting. You have to stand back and let your eyes soak it all in.

SCREAM FOR ME!!!
Jim and I share writing duties, but in reality Jim handles the “heavy” writing and edits what I write. Just as Jim handles some design and/or artwork, but I handle the “heavy” stuff. It works out pretty well for us. I often joke, “If there is something really plot heavy in the book, Jim wrote it. If a 6 year old girl talks, It’s probably me.” I am a big nut for the Seekers and I insisted I write them. Jim usually gets to write all the cool stuff, so he was nice and let me go crazy on the Seeker section.

Since the beginning I insisted that Starscream be the ONLY character that talks about himself. And it was from there that I had the bright idea to have all the Seekers talk about each other. And of course you all know the story behind the name Slipstream. If not, go look it up. I am not repeating myself! But heres some trivia, originally we thought about naming her as the third Rainmaker. We decided not to, but we the name is still in our heads waiting to find the right venue!

Jim went in a drew appropriate little expressions on the clones. We felt it got a little boring with the same model just in different colors. Thundercracker, however, uses the clone model's face. It just worked perfectly.

Page 88:
So Jim and I came up with the term “Space Poncho” for Lockdown’s invisible...space poncho. For weeks we couldn’t stop saying it. If there was a moment of silence one of us would whisper out in quickened almost Spanish accent... “Space Poncho.” If you ever meet us in person we will do the voice for you. ANYWAY, one day I get a box in the mail from IDW. I was surprised when I found that in was copies of a scholastic version of the Almanac. It was smaller and mostly just had the bio section in it. It was really cool, but one weird thing was in order to keep the pages facing the right way and edit out the episode guides they had to fill in a right facing page. At the end of Lockdown’s bio someone added a full page of just the Space Poncho. It’s awesome and started me and Jim up again. ...Space Poncho!!!

Page 89:
We didn’t have a Ratchet at the time so you got Optimus, BB, Bulk, Prowl and ...Starscream. Ratchet makes his way into the AAII.

Page 94:
I LOVE this bio. Jim wrote it. Again, Jim and Swindle were separated at birth. We had no back or glider models for Archer. So sad. See the Grenade Arrow? We cheated.

Jim drew that. Once in art school Jim tagged along to a life drawing class with me. My teacher was amazed how awful he was. Now his artwork is being publish and I bet you guys didn’t even know it wasn’t a real model from the show. See kids? See what you can achieve when you buckle down?

Page 96:
When we got to writing the Humans, Jim was eager to get started on the episode guides and had no interest in writing Slo Mo’s voice. So he asked if that was something I could do. I did my best imitation of Jennifer Jason Leigh's character from the Hudsucker Proxy and that’s what ended up in the book. I think what you see there is the “first draft” verbatim what I said.

Slo Mo had two character models. One with and one without a ton of watches. The watches were a little hard to see. Jim had the great idea of removing the color from the rest of the model and then just sectioning off the arms and torso. Then place it next to the other character model and there you have it. A nice little detail of her accessories.

Page 103:
So we needed Grimlock to say something! I wrote, “Mutants Bad!” and Jim edited it to, “Bat-Monster Bad!” in order have Fanzone talk about the other mutant. They say you are your own worst critic. Mine’s Jim.

NEWS FLASH! Jim just told me that Marty insisted that they not be called mutants but rather Fusion Creatures!!! (sigh) See? That’s why I need Jim editing my stuff. err...


Page 104:
We wanted Blurr to talk fast but frankly how do you write that? So his text is slightly smaller than the other characters. Anyone get that? I would like to think on a subconscious level that worked.

Page 105:
So Jim and I reference everything. So needless to say, sometimes we reference stuff in OUR lives not just in TF or SciFi. Jim wanted to name a character after his wife Ming Li. Well I’m not married, so I named a character after a friend of mine, Shana Storey. Shana is one of the most interesting people I know. Shana was a weird little punk rock girl that used to shop in the comic book store I used to work in many, many years ago.

We became good friends over the years and she was even my date to Jim’s wedding. I mentioned she races boats because the real Shana repairs and sails boats with her boyfriend. When I asked her if I could use her name she said, “Only if you mention sailing.” She spends a great deal of her time at the South Street Sea Port in NYC. Here's a picture of her! Once she got hit by a UPS truck. That has nothing to do with Transformers. It was just funny.

Next up is the episode guides. Plenty to say about those! See you then! Oh, and don't forget to come and meet us in Burbank on Saturday, July 3rd at 1:00 PM! Marty and Derrick, Jim and I will all be signing autographs so be sure to come out and meet us.
Posted by Post No Bills at 10:47 AM

Ecellent, this makes me want the second book even more now.

and guess what...I just got an email from amazon saying theres a problem getting the book from the supplier.

Do you have any onfo on that? As it is I've only seen two places selling the first book in the UK (amazon and Play.com) and I've never seen it in any shops and for amazon to turn around and say they don't even have a delivery estimate has me very concerned.

Hmmm... I feel like this happened last year too. I don't have specific insight, but I'd be very surprised if Amazon didn't ship the book in a somewhat timely fashion. Another option would be to contact your local comic book shop and ask them if they're getting any in. Even if they aren't, they can probably use the comic book distribution network as opposed to the book distribution network; perhaps that will prove more reliable.

Thanks Jim. If amazon doesn't update soon I'll have to take that option. They're usually really good, I'm surprised they're having the probs, but at least they've been letting everyone know.

So now what Everyone needs to know is...will there be a volume 3?

That's always a possibility... IF there is something new to cover. This book, taken with volume 1, is a fairly exhaustive look at the cartoon and the toy line. Now, *IF* IDW were to do a comic mini-series, or *IF* Fun Publications were to do some Animated stories, then there might be enough material for us to consider revisiting this universe. BTW, if you'd like either of the above scenarios to happen, let IDW / FP know.