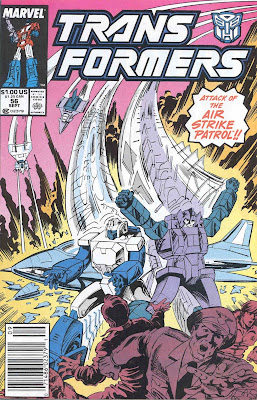 Back from the Dead is the fifty-sixth issue of the US G1 run of the Marvel Comics Transformers series.  It is the first US issue penned by Simon Furman, who had been writing the UK Transformers series for quite a while.  To help ease the transition, José Delbo and Dave Hunt stay on as penciler and inker, respectively.  Jim Massara provides letters, and the ever-present Nel Yomtov does the colors.  The cover is by Dan Reed, his first US Transformers work.  His work would be familiar to UK readers of the Transformers comic, though. Oddly, Mr. Reed is an American expatriate living in France.

Starting, as we tend to do, with the cover, we're treated to a fairly prosaic scene.  Given what I know about Mr. Furman's storytelling technique, I'm sure this was intentional.  The Air Strike Patrol attacks a human airstrip, while uniformed humans flee.  After the past two months of Micromaster adventures, this seems like more of the same.  It's a rather nice rendering of this scene, though, with a powerful and eye-catching explosion in the background and two of the micromasters in robot mode in the foreground.  "Attack of the Air Strike Patrol!!" it proclaims, as if that is the highlight of the book.  Spoiler alert: it's not.

The issue itself gets off to a much more unusual start.  Ratchet is surrounded by damaged Autobots, stumbling towards him like zombies.  Blaster's head, mounted on a mechanical arm, is an especially creepy image.  They blame Ratchet for their failure to fix them, and threaten to tear him limb from limb.  The narrative caption says that Ratchet will never forget this day, for this is the day "the dead walk!"  Very effective.

Of course, this all turns out to be a dream, brought on from overwork.  Optimus Prime interrupts this dream and orders ratchet to get some rest. Optimus worries that he's pushing Ratchet too hard, but also needs to get his warriors back online. He muses that, though Megatron is long dead, the legacy of his evil lives on.  Meanwhile, Ratchet bemoans the lack of modern medical equipment that exists on Cybertron. Cybertron... But before we make the transition to Cybertron, let us pause to consider how dense the first three pages are.  Ratchet and Optimus Prime are reestablished as characters, Ratchet's mental state is depicted for us, we're reminded of the evil that is Megatron... Furman doesn't fool around. 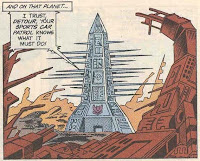 On Cybertron, the Decepticon Micromaster Sports Car Patrol is given a mission, though we don't know what it is except that it requires subtlety and sneakiness.  They trade Decepticon symbols for Autobot symbols, and then a mysterious figure gives Whisper of the Air Strike Patrol the go-ahead.   Soon, the earthbound Micromasters are attacking an air force base, ostensibly to capture a mid-air refueling plane. Though Getaway doesn't particularly want to get involved, Optimus orders a strike force to descend to Earth on a shuttle to deal with this new menace. This, unfortunately, leaves the Ark virtually unguarded. Prime lands and confronts the Decepticons, who call Scorponok for reinforcements.  Ominously, they say that they love it when everything goes according to plan, indicating some master manipulator at work. Who could it be? The tension gets higher and higher, and for the first time since the Underbase we really get the sense that we the audience have big things in store for us. 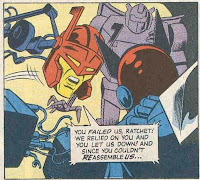 Ratchet, who hasn't yet taken that rest, worries that Autobots going into battle means more casualties for him to repair. He catches how selfish this sounds, though... right as something tickles his peripheral vision.  He doesn't quite see the Sports Car Patrol, though, allowing them to put their plan in place.  Blackjack reprograms the ark's systems, causing the various Autobots on life support to begin to attack him. At first, he almost welcomes oblivion, but then he fights his way to the emergency cut-off switch for the repair bay. Only, he can't press it... it would end whatever chance for survival they have. After all, he realizes, in the final analysis... he's expendable. This creepy sequence is somewhat undercut by the dream that started out the issue.  It's a bit of a narrative weakness to go through the same sequence twice.  I could forgive it if we had some other hints of precognitive dreaming from Ratchet, but as it is it seems a bit coincidental for my taste. 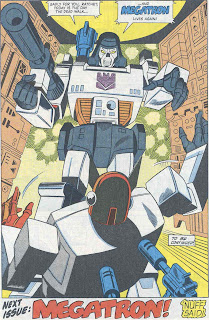 In any event, Ratchet's sacrifice isn't what Blackjack wanted, though. They wanted him broken, but alive. The 'Con in disguise shuts off the zombies, then introduces himself to Ratchet.  They say that they're here to bring him to Cybertron, on Prime's orders.  Ratchet, wisely, decides to call Optimus Prime to confirm this story but can't raise him.  Ratchet then impulsively decides that he'll do it, and brings Grimlock, Jazz and Goldbug along with him.  "Why aren't they coming with us," he asks, and it's not sure what "they" he's refering to.  The Autobot bodies seem like a logical candidate, though that won't turn out to be the case.  All the Decepticons come with him except Blackjack, so that doesn't quite work either.  But no time for quibbling, for the next and last page reveals the mastermind behind it all... yes, Megatron is back from the dead!

It's a very strong issue.  We start to see plans within plans, which leads us to want to see where things are going.  Optimus Prime was flawlessly manipulated, behaving exactly as predicted.  The real hero of the story, Ratchet, manages to forge his own destiny, though, by refusing to terminate his zombie comrades.  It's great to see Megatron back, after a thirty issue absence. Though we never got to know him all that well in his initial appearances, he still looms large in the mind.  It was smart of Furman to remind us of him earlier on in the issue.  The issue is not without its flaws, though.  There are numerous errors in the art and dialogue. Normally I'm fairly forgiving of these, but they actually impact my understanding of the story, which is a big no.  Also, as mentioned, Ratchet dreaming of the very thing that will effect him seems clumsy.  If Blackjack somehow knew about those dreams... but, there's no reason to believe he did.

This is Simon Furman's first ever US comic, and it seems to augur well for his run.  The dialogue definitely shifts from Budiansky's characters, though not in a bad way.  Furman seems to be a fan of Claremontian storytelling, both in how he structures his dialogue and in the sorts of plots he sets up.  It's interesting to note that the pagecount has dropped from 22 down to 16, with six Universe profiles to make up for the gap.  It seems clear to me that Furman was brought in to preside over the termination of the Transformers comic.  It's a testimony to his talent as a writer that this pagecount would gradually creep back up, though aside from a few milestone issues it wouldn't get back to a full 22 count until the G2 run.  As much as I love Budiansky's quirkiness, I adore the large cosmic tales that Furman chose to tell.  I'm a sucker for space opera, and Furman definitely nudged the franchise closer to that direction.


"Next issue: Megatron! 'nuff said!"  Back from the Dead is available for sale in IDW's Classic Transformers Volume 4

I for one enjoy where the series go from this point and I think Simon does an excellent job with that. I'm sure he's the reason why the run after this issue gets so much better.

If Furman was brought in "to preside over the termination of the Transformers comic" (and I see no reason to dispute this), it's as much a testimony to his talent that the comic continued for another two years!

And this is without the concurrent existence of a cartoon to keep Transformers in the public mindset!

I had never heard of Simon Furman before I picked up this issue when it came out in the 1980's. I didn't know he would be the new permanent writer at the time (the Dutch translations I got never mentioned anything about creative team changes), but I immediately loved what he was doing, bringing back Ratchet and Megatron. And even offering up hope that the other classic characters might get to be revived later.

Eventually, I became a huge fan. Still am, actually :)

Although the only reason the page count was this low was that he had to get used to telling a 22-page story! I remember reading in an interview he never expected José Delbo to put as much dialogue in one page, or something. Hence the story was done in 16 pages rather than 22.
I believe the UK TF comics at the time had 11 pages, so that was what Simon was used to.

The UK comics were usually 11 pages long but most of the stories up to 1989 were two parters so Furman was generally used to having 22 pages to play with although artificial cliffhangers and recap flashbacks took up a few.

Although Furman gave consistent quality on the US run, it's unfortunate that this was around the same time that the quality of the UK comic nosedived, with a shift to five page original black & white stories that often offered little meat, whilst continuity with the US comic first slipped out of line (in particular a few extra epilogue stories to US events started appearing before the US stories they follow on from) and then descended into the total mess that is Earthforce. Resurrecting Megatron in the US strip also created problems as the guy had been running around the UK strips for a lot of the intervening period and the explanation provided raises more questions than it answered.