Secrets of the Almanac (ONE) Revealed Part 4

Well, wouldn't you know it? ANOTHER AllSpark Almanac post! We're scrambling to get everything in place for both BotCon and the book launch, so I'm stepping in for Bill and posting part four of the Secrets of the Almanac (one) series.

Wait a minute - part four? What happened to part three? Well, Bill really wanted to do that one, so I'm going to save that post (the episode guides) for him.  Meanwhile, I'm going to finish out the rest of the book. With a little luck, we'll get the last post out Monday or Tuesday, just in time for the new volume.

Page 158: We cheated a bit here and included Prowl's cybertronian motor cycle mode. Technically this is out of scope, as it's a season 3 model. We thought that for completion sake, no one would mind.

Page 161-162: Both Sentinel's and Blackaracnia's model got updated from the pilot episode to their next appearance. We thought that this was basically an out-of-universe bit of discontinuity, so used those construction borders. Sill, they sort of seem to fit thematically with the idea of Cybertronian, i.e. pre-Earth, modes.

Page 162-163: Javier did a great job coloring the backs of all these guys, no?  I don't call out every bit he colored, but he deserves special credit here for keeping this page from being 60% black & white.

Page 164: Chris McFeely, who is awesome, found all the references on this page; Samus from Metroid, Deckard from Blade Runner, IG-2000 from Star Wars, and of course Death's Head from Marvel.  What he didn't do was put together the common theme; they're all bounty hunters. 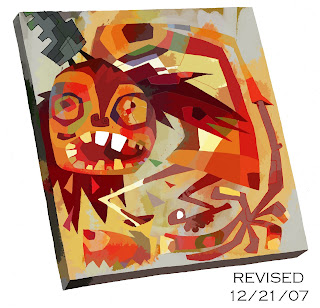 Page 169: Fun foreshadowing to Sari's eventual reveal from Bill here. We didn't know if the book would be out before Season 3 aired or not, so we kept things oblique. Still, you gotta have a few hints here and there, right? I think that this page is one of the few that was intentionally incomplete; the destroyed version of the picture wasn't used.  It was just too hideous. We kept trying to find a place for it, but couldn't.

Page 170: This is the first instance in the book of two characters speaking in tandem. Originally we only had the Constructicons doing it, about Megatron's base. Bill came up with the idea of doing Halloween this way to balance things out.

Page 179: The mailbot is a double cheat; he doesn't show up till season 3, and he is a robot that should probably be on the robots page. We realized that, when the time came for book 3, the mailbot would be an odd-bot-out, and so tried to work him into this book relatively late in the process.  He didn't fit into the robots section, but did more-or-less fit in with the buildings of Detroit.  It also helps make this section a bit more dynamic.

Page 182: Bill drew up Prometheus Black's mugshot, which of course wasn't in the show. We really wanted to work the mugshots in somewhere, and the prison page seemed like a natural fit.  However, the aspect ratio of the mugshots were making the page awkward, which is the reason we inserted one more.  Note how all their numbers correspond to their first appearences.

Page 184: We decided to keep Sparkplug (the dude, not the dog) on this page with his fellow construction workers, rather than with the Witwicky family in the acknowledgments. He's just too 1984, and they're all 2005. Also, I don't know why there are five teens with numbers on their shirts, but there are. Bill wanted to mix them up, I wanted to put them in order.  I thought it called more attention to itself that way.

Page 185: I love, love, LOVE Bobby Bolivia in the upper right hand corner.  Derrick drew him up for The Arrival #2, the scene in the used car lot.  Unfortunately, he didn't get used.  Also notice Irineo Maramba, three to his left.  Ah, self insertion... you'll never catch ME doing such a thing.  In retrospect, I wish I'd labeled him, but we had just so many humans to try to put in that it would have been really difficult to name any of them.  Artistically, to name some but not all would look really awkward.

Page 187: Bill and I try really hard not to use the same exact image twice in the book.  Note the tough guy with Kremzeek on his shirt; he shows up elsewhere in the book, on the Speed Demon page.  No Kremzeek shirt there, though.  The Kremzeek shirt was from a cut scene in season 3; he was to be held up at bowpoint by the the Angry Archer. Some of his fellow racers show up here, but they are also colored differently.

Page 192: Bill just loved that this page was titled "Stupid Organics" rather than "Animals." It cracks him up every time.  Note the S3 wasp model here, another little cheat.

Page 206: I loved the Nemesis bridge lighting effect. It was one of the few that Bumblebee never experienced, so we made up for it by featuring each of the Decepticons with this lighting scheme, albeit fairly small. I like the way 206 kind of mirrors 207, pre and post crash.

Page 213: Marty Isenberg was the guy who came up with the "We're looking for a few good bots" quip here.

Page 216: I studied math and physics in college, so I couldn't resist the opportunity to define the Cybertronian measurements in terms of universal constants.  I was a little surprised the science geeks didn't respond more to this page. The Takara stamps were an 11th hour request from Hasbro that we were glad to oblige.  Originally the page just had stamps from Hasbro, Eric, Derrick and Matt.  I love Ejima's happy little stamp.  He had a traditional stamp too that we didn't use, pictured to the left.

The story behind having any stamps at all was that Bill and I were hanging out with Derrick late at night at cartoon network and Bill asked if Derrick had ever drawn himself as a Transformer.  Derrick matter-of-factly told us that yes, he had, and that he used it as a seal of approval.  I sort of demanded he give me a copy for the book, and he was happy to oblige.  He then went and rummaged through Matt's desk and got me his stamp too.  Finally, he told me to write to Eric and get him to send me his stamp, because it is awesome.  Eric did one better and also sent a Hasbro seal of approval.  It was the willingness of people like Derrick and Eric to go the extra mile that really helped put the book over-the-edge.  Bill and I really can't thank them enough for all their time, energy, enthusiasm and general kick-assedness.

Page 219: With the blessing of Derrick & Marty, I named the Witwicky child Nancy, after my mother.  Hi, mom!

So, there you have it! Secrets of the AllSpark Almanac (one), revealed.  After BotCon, hopefully before Wednesday, Bill will round out this series with the final hidden references from the episode guides, including the dreaded XLN247... stick around!
Posted by Jimtron at 10:23 PM