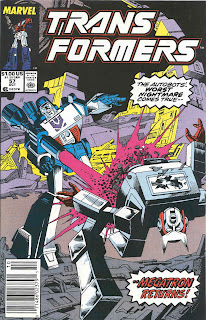 The Resurrection Gambit! is the fifty-seventh issue of the US G1 Marvel Comics run of Transformers.  Like the last issue, it was written by Furman, drawn by Delbo, inked by Hunt, lettered by Massara and colored by Yomtov.  The cover is by José Delbo.

The cover is rather fanciful, though more than a bit awkward.  Megatron blasts Ratchet directly in his midsection, causing sparks and wires to flyeverywhere.  They seem to be standing on the some Cybertronian wreckage.  I don't really mind that this exact series of events doesn't happen in the book, it's sort of close enough.  Megatron DOES blast an Autobot in this environment, and while Ratchet isn't physically harmed, he certainly must feel like this.  Hoever, the poses and composition seem really stiff and awkward.  Megatron's leaning back too much, and his arm is at a funny angle.  Ratchet's legs and torso don't seem to go together, and not in a his-torso-was-blown-off way.  Taey're also way too close together.  "The Autobots' WORST NIGHTMARE comes true -- MEGATRON returns!" I actually like the cover, since it really does correctly set the tone, but technically it's all wrong.

Now, the first page of the book, on the other hand, is just about perfect.  Megatron gloats, while Ratchet falls deeper into despair.  Great lettering work from Massara on Ratchet's escalating "no" bubbles. "It began with a dream--a nighmare in which the dead walked! And though the dreamer--Autobot surgeon Ratchet-- is now wide awake, the nightmare continues..."  Good stuff there, Furman! There's also a double play on the meaning of the title. One's first instinct is to take the resurrection gambit to mean Megatron's return, and in a way it is.  This is Furman's resurrection gambit.  However, it also applies quite literally to Megatron's dastardly scheme-but we'll get to that in a bit.

The Sports Car Patrol openly mocks Ratchet for falling for their ruse. They should, it was shady from the start.  Megatron, though, just oozes smarmy charisma, telling Ratchet that all he wanted to do was help the physician heal the sick.  His creepy smile says otherwise, making it easy to imagine Welker delivering these words with his customary irony.  Ratchet, in a very self-aware moment, asks Megatron for his "how I survived" story, but is instead treated to the "my insane scheme" story first.  The insane scheme, it would seem, involves Pretender armor.  I love how Furman pokes fun at the very conventions he is using, which serves to make them fresher than they might otherwise be.  He makes it seem almost effortless, though I imagine that he really was concerned about giving us too many superhero cliches.  He needn't have worried; despite being a comic, Transformers had managed to stay away from most of the more flamboyant comic book tropes.

Furman then transitions to Earth rather slickly, by having Ratchet wonder why Prime failed to answer his radio call last issue.  We get to see that first hand, as Storm Cloud shoots out the radio once the call goes through.  First, though, Prime arrives and orders the Cons to surrender. Despite being outnumbered two to one, the Air Strike Patrol refuses. After all, can the Autobots really risk a battle with all these humans around? Prime goes along with this, at least until Storm Cloud makes his move.  This causes Prime to go berserk, and a rattled Storm Cloud rattles off a bible verse; "physician, heal thyself."  Prime correctly interprets this to mean that Ratchet is in danger, but before he can act on this knowledge, Scorponok and a Decepticon strike force arrives.  Of interest is that real moral of the proverb is to fix one's own shortcomings before criticizing others; it's synonymous with "people who live in glass houses shouldn't throw stones." Optimus Prime has abandoned his principles of safeguarding all life first, and this mistake will cost him.  Storm Cloud didn't intend to use the proverb to highlight this, but it's entirely possible that Furman did.

Back on Cybertron, Ratchet refuses to help... at least until Megatron reveals that the Ark is rigged to explode should Ratchet not help him.  Perhaps to give Ratchet a few moments to dwell on this, Megatron favors him with the story of his resurrection. We learn that Megatron was blasted through the bridge and landed, deactivated, in the Dead End, where Cybertronian neutrals eek out a meager existence. Eventually, he recovered his body, and then his wits and began to prepare for his return, and revenge.  When Dreadwind and Darkwing return with the "patient" for the Pretender armor, Ratchet muses about what a waste it is to have three prototype shells just going to waste. In the background, the bodies of Goldbug, Jazz and Grimlock lay, deactivated and useless.  Nice foreshadowing... and, actually, nice shadowing too.

On Earth, Scorponok and Weirdwolf attempt to bring down Optimus Prime.  He savagly strikes back, even as the Air Strike Patrol flees.  After all, they have no desire to be there when Megatron's surprise arrives.  Meanwhile, the General who was giving the demonstration in the first place manages to get all personnel out of the area... seconds before Optimus Prime punches Bomb-Burst into the bleachers. Both the Decepticon and the General call Prime on it, prompting him to attempt to stop the battle before it's too late. But he'd better act quickly, for Ratchet is shocked and awed to find out the nature of the patient... Starscream! Hence, his gambit really is a resurrection gambit. Nifty, there, Furman, quite nifty.

This issue is terrific, somehow quite a bit better than the last one.  Issue 56 is all set-up, slowly establishing the mood.  While this issue really is mostly exposition, with a bit of action down on Earth, it's very clever and exciting exposition.  Megatron, Ratchet and Prime all get great characterization here. It was very shrewd of Furman to go with Ratchet for Megatron's pawn, rather than, say, First Aid or Fixit.  Ratchet's past history with Megatron makes him ideal.  I love how deliciously evil Megatron is, Furman just nails his voice perfectly. Megatron was never really THAT menacing the first time around; the first four issues were jumbled, and then he mostly seemed to be a rival for Shockwave rather than a threat to the Autobots for the rest of his appearances.  It's nice to see just how bad he can actually be when allowed to cut loose. Even Prime, who can be boring, manages not to be this time out. His tension was evident as of last issue; this issue, he loses it and it works great.  General Campbell, though, could have done with a mite more characterization. When reading this story, I couldn't help but feel that under Budiansky he'd have been a person, rather than just a cipher playing a role in the story.  Still, different writes, different strengths.

Next issue,   "RATCHET might be able to save his patients -- but can he save himself?!?" I'm definitely along for this ride, anyway.  The Resurrection Gambit! is available for purchase in IDW's Classic Transformers Volume 4

I remember when Furman took over at this point how much better the story was. I remember not being able to put this issue down it was so good and to finally see classic characters back into the fold and then the possible resurrection of Starscream did it for me.