Post No Bills: Secrets of the Almanac (ONE) Revealed

With  The AllSpark Almanac II

(preorder it today!) coming out soon I thought it would be a nice idea to revisit the first Almanac and give fans some insight to the book, tell a few stories and document any un-found references (though there aren't many.) I’d like to say this is an attempt at doing something fun for our readers, but really to tell the truth, I wanted to write this stuff down for my own nostalgic desires. This will be in a few parts. Today however I thought I’d talk about how the AllSpark Almanac came to be and go through the first 40 pages and see what jumps out at me.

A few years back Jim and I were eagerly awaiting the release of the Ark II. We had no idea what project we wanted to do next. As we walked around Botcon that year we tossed ideas back and forth. While attending a panel about the NEW animated series we came up with the idea to “The Ark Animated”. It would be just like the Ark books, only in color. This thrilled me because as much as I love the Arks, the restoration drove me outta my mind. Here we would be working on a current cartoon series. The art work was all together and in good shape. After the panel we decided to speak to the Art Director of the new show. An enthusiastic Derrick Wyatt loved the idea and honored us by tell us that he used the first Ark book as reference material. How crazy is that? We pitched the idea to IDW and they loved it. They’re a very supportive team. Check out a very early brainstorm for what a cover might look like to the right.

So Jim and I started collecting images from Cartoon Network and trying to piece this new Ark together. What we found was, there was a lot of material here. Ideas started hatching and one of us said, “Why not model this after those Japanese books that document the show entirely?” Aside from a few Disney books and that Batman animated book, we really didn’t see that much in the western world. We started talking about doing episode guides. Aside from an MST3K guide I bought years ago, I had never read an episode guide that was at all entertaining. They are usually boring and simply tell you a story you already would have seen in a profoundly stale way. We agreed we needed something with more pzazz. After brainstorming for a while I had the idiotic idea to have Sari completely narrate the whole book. I knew there was some potential to an all in universe guide book. Jim wasn’t crazy about everything being Sari and it slowly became, “Well Sentinel should really talk about this!” and “It would be funny if Ratchet said that.” Before long we had it set. The episode guides, the bios, everything would be narrated by whomever would fit best.

The Cover:
Now we h

ad a book! But it was no longer an Ark book. We tossed around new names and Jim said, “The AllSpark Almanac”. Almanac? ALMANAC? Why Almanac? Well, as Jim pointed out after the Ark books came out we would google them and have to dig through a lot of other Transformer Ark references. Almanac is easier to Google. “Whatever”, I believe was my response. And I started making sketches of cover ideas. Finally we had the idea of Bulkhead and Sari painting the cover. Marcelo took care of the rest.

The First 40 Pages:
As I sit here looking threw the beat up copy I used as reference for the Almanac 2 I am just going to systematically tell you whatever comes to mind if anything.

Inside covers:
The sketches on the inside covers where a last minute thing. Jim loves sketches and was trying to shoehorn as many in as possible. We have become masters at using our “design crowbar” to squeeze a lot of information into a small amount of space. It hadn’t occurred to us that we could even use the inside covers until after the book was already completed. But our editor Justin made it happen for us.

Page 1:
Jim and I love bookending things. Go look at the two Arks and compare them. Intro pages have a similar feel to them. So the spiffy Space Bridge as the opening image mirrored

with the destroyed bridge as the last page fit the bill nicely.

Page 2 and 3:
Jim loved that long picture of Megatron’s head in Sumdac’s lab. However for the life of me I couldn’t figure out anyway to make it nice and big and not end up cropping the entire left side. Eventually I came up with the idea you see in the book. This continued the painting motive from the cover. Jim put the Hasbro logo where it would look like Bulkhead had painted it. 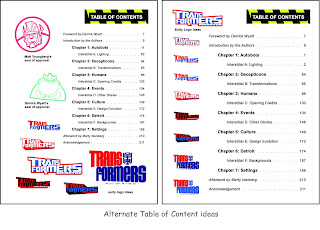 Table of Contents:
We argued about how those logos should be displayed more than any other page.

Page 9:
Early on we had the notion of drawing ourselves into the book as mugshots similar to the ones used in the show. However we had no actual reason to do this other than we are just egomaniacs. We felt we needed to talk about the “in universe” idea and explain the border for out-of-universe dialog. But we needed to explain it in-universe. Strange the problems we face. We came up with the story of us being characters from a mirror universe.

The out-of-universe boxes were influenced by the Constructicons and also Lugnut’s forearms. Originally they were going to be red, but it took away from the more relevant images of the pages.

Jim’s mugshot number is Magneto’s Auschwitz number. We were a little concerned that that reference might be in poor taste, but ultimately decided to use it. Magneto’s awesome and it’s a part of his character.

My shirt looks a little like an AC/DC t-shirt, doesn’t it? I needed a simple but recognizable logo. The snake is supposed to be one of my pet snakes, my boa constrictor Charlotte. She is named after "Charlotte the Harlot" a really old, really great Iron Maiden song. I often say that my great loves in life are the “3 R’s.” Robots, Reptiles and Rock n’ Roll. ...Yeah, okay that’s 4 R’s. Another one of my snakes named 1812 appears in the Almanac 2. And yes, his name is 1812. He’s a California Kingsnake. Look for him!

Page 11 Hero:
After the book was done. I mean done. DONE. We sent it to IDW who sent it to Hasbro. Hasbro replied that they wanted a meeting and scared the crap outta us. Hasbro never dealt directly with us before. What did we do? Well, turns out Hasbro loved the book. So much in fact, that they wanted to add in some stuff about Hero, the precursor of Animated. They sent us some stuff and we crammed even more into the book.

Because of this late entry in to the Almanac I drew up an extra Kremzeek to go on the interstitial page. Originally the first Kremzeek to appear in the book would have been the “Technical Difficulty” image that appears on page 56 which was intended to start a motif.

Page 15:
One night we are sitting in Derrick Wyatt’s office down at Cartoon Network. Jim and Derrick are talking some hardcore Transformers speak (way above my level of understanding) and I am sitting Indian style on the floor skimming through hundred’s of production drawings Derrick just had laying around. You wanna have fun? Hang around Derrick. Cool stuff just springs forth. There I find a bunch of little pocket bot drawings. So I start putting them in order. Hence the idea for the little flip book thing over in the bottom corner.

Page 20:
In order to get Lockdown's "voice" I would watch Clint Eastwood movies. Then as I drove to work on my motorcycle I would shout out on the highway various tidbits about Ratchet in my best Eastwoodesk-Lockdown voice. As it turned out I got a lot of crazy looks from passing motorists.

Page 23:
So Jim and I have this long running inside joke that stems from absolutely nothing at all. We often jest that we intend to leave all reference to Prowl out of all of our books just to see fan reaction. We like Prowl, but for whatever reason he's the guy that we pick on. In this case we jokingly played with the idea that we would post all of Prowl's gear as "The Police Man" and just leave Prowl's robot model out. When questioned we intended to answer, "Prowl? Oh that guy? We didn't think he was that important to the story."

Then to add insult to injury, we would wait until fans demanded Prowl in the Almanac 2 except we would print his armor with his body Photoshopped out standing next to his sidecar. Titled: Side Car Man. "What?! That's not right? Perhaps we should watch the show." At 3 o'clock in the morning after working on this stuff day and night this seems hilarious!

Page 33:
Originally we wanted to call the hammer the Stormbreaker after Beta Ray Bill. However we learned that it already had a name the Magnus Hammer. This paved the way for mistakenly using the word Stormbreaker rather than Stormbringer as it was in the packaging bio.

Page 35:
This is why I hate technology. One day Jim is reading Derrick's Twitter page. Derrick refers to the spray as Cyber-Sol...so now we have to update the book. It gets really difficult to keep up with everything.

Sometimes when you lay things out they just don’t fit. Either you have to sacrifice design or size or something, but it just will not work for you otherwise. Well here’s an example. We could not fit all of Grimlock and Snarl’s images on one page each. So in a clever rouse we decide to have a Dinobot section of 4 pages instead of simply having a Grimlock page, a Snarl page and a Swoop page. This worked out really nicely when we realized we didn’t have much to say about the latter two fellas. Now we hate when we do something only once. Doing a design element once looks off. But do it twice and it looks like a motif. So we repeat this idea with the Constructicons. As you can see on the early draft of the Grimlock page to the right, the official model for Grimlock's back in dino mode was in black & white. Javier did a great job of coloring it, didn't he?

Well thanks for indulging me. I’ll write more about the next 40 pages next week. Until then if you have any questions, post them. Thanks for listening and for making the AllSpark Almanac so special!
Posted by Post No Bills at 9:31 AM

Awesome stuff, Bill. I hope I'm not alone in saying that I'm probably going to ask Hasbro at every Botcon from now on if they'll ever re-visit the Animated universe, one benefit of which is we could possibly get another volume of the AllSpark Almanac.

Hey, pipe dream, I know, but it's fun to dream.

Bill and I would be more than happy to do a third almanac, provide there was enough new material to warrant such a treatment. Personally, I'd love to see Marty write up a fourth season in virtual comic-book form. Between that and a year of Botcon exclusives and stories, we might have enough for a 3rd volume.