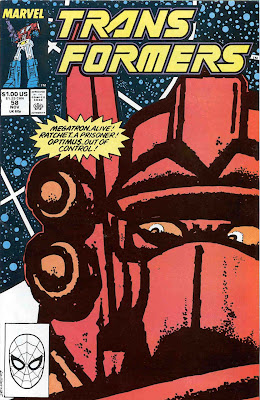 The fifty-eight issue of the US G1 Marvel Comics run of Transformers is titled All the Familiar Faces!. (What, "Back from the Dead" doesn't warrant an exclamation mark, but "All the Familar Faces" does? I think Furman had his punctuation swapped on this one.) It was written by Simon Furman, drawn and inked by Delbo and Hunt, lettered by Massara and colored by Yomtov.  The cover is by José Delbo.

It's a very strange cover. I can't decide if it's artistic or merely lazy.  We're treated to an extreme close-up of Optimus Prime's Powermaster face, with bold inking and an angry red color.  There is an abstract background of space or maybe just bubbles.  "Megatron(tm) alive! Ratchet(tm) a prisoner! Optimus(tm) out of control!"  That pretty much summarizes what we'd expect to be in this issue, based on what we've seen before. Well, except that Optimus has mastered his anger issues and is now talking again.  I think this cover might have worked a bit better last issue, when Optimus really did lose it. The red color certainly brings to mind rage, which doesn't quite fit the tone of the book.  Overall, it's an interesting cover but perhaps the effect should have been saved for a different issue.

The issue itself opens on a lovely splash of the Starscream pretender shell turning the mangled and shattered shell of Starscream back into some semblance of Cybertronian life. Ratchet momentarily loses himself in the excitement of the technology, but quickly reminds himself that he's being forced to work for the Autobots' greatest enemy. His thoughts and Megatron's gloating get the obligatory exposition out of the way. We're treated to a bit more unsubtle foreshadowing about the upcoming rebirth of Jazz, Goldbug and Grimlock, as well as a callback to the Mecannibals, who Dreadwind and Darkwing fear may still be on their trail. It's an opening sequence rich in characterization, with Ratchet and Megatron shining but even the Sports Car Patrol and the Decepticon Powermasters getting a brief moment in the sun.

On board the ark, Kup struggles to consciousness even as Blackjack gloats to himself about planning to destroy the Ark whether or not Ratchet helps Megatron. Though Kup takes the diminutive Decepticon prisoner, the timing device on the Ark's explosives is triggered, giving them five minutes to act.  From a narrative standpoint, Kup's revival is slightly clumsy. It seems late in the game to be introducing this kind of new element. Perhaps if there was some hint of Kup's status in the last issue... alas! 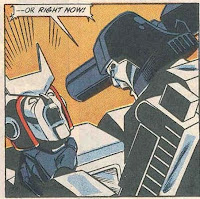 Back on Cybertron, Megatron's patience starts to wane, so Ratchet presents Starscream, his mind a blank slate awaiting programming.  With his triumph thus secured, Megatron sends the Sports Car Patrol to the lab to disassemble it and announces his intention to destroy the Ark. Ratchet, thinking quickly, sets some machinery to overload and ditches his Micromaster guards.  Unfortunately for him, Megatron has already prepared a program for Starscream to follow and sends his avenging angel to Earth without delay! Ratchet bemoans that his "little surprise won't kick in for--," but before he can continue he's interrupted by an angry looking Megatron. Things are certainly moving along briskly now. We get a bit of comic book panache and a strong sense that things are building to a crescendo.


As Optimus has realized the there is a mystery afoot, he orders his men back to the Ark while he remains behind to cover their retreat and convince Scorponok of their good intentions.  In the first bit of characterization he's had in the US run, Hot Rod impulsively decides that he'll stay behind and help out.  Scorponok is tempted to just blow these two lone Autobots away, but he can't help feeling that Prime's words echo his own inner doubts. He also remembers Prime saving his life during the Underbase saga, which conveniently sets up his fear and loathing for Starscream.  By the time he decides, though, it's too late. Starscream arrives, much to Zarak's consternation. Once again, we see some rather deft characterization springing from Furman's pen.  This time, it's Hot Rod (love the "whoever it is -- he sure knows how to make an entrance!" quip from him), Optimus and Scorponok.  Though we've known Scorponok for several years now, we really haven't seen much about what makes him tick since the rather excellent Headmasters mini-series.  Kudos to Furman for exploring this human (err... Nebulan) aspect to him. 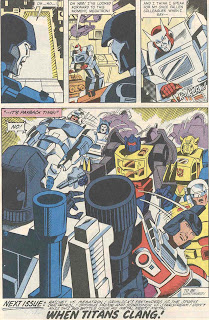 Finally, we approach the end of the issue and move all pieces into position for the triumphant climax.  Dreadwind stops Megatron from blowing Ratchet away then and there, since there's something happening in the lab.  The other shells are activated, you see.  It only takes Megatron an instant to realize what has happened here. "Oh... no..." he moans, quickly countered by Ratchet's inevitable "Oh yes!" Ratchet pulls a lever and unleashes his three Autobot compatriots, Jazz, Grimlock and... umm.... Bumblebee? More on that next issue, though, as it's To Be Continued!  It's a great cliffhanger to end on; you've got the ticking clock on the Ark, Starscream versus Scorponok's Decepticons with Prime and Hot Rod, and the Autobot Classic Pretenders versus Megatron.  For his initial arc, Furman certainly pulled out all the stops.  And, hey, he's introducing new toys as well, four Pretenders and four Micromasters.  This issue lives up to all of the promise of the first two in the arc, and gives me every confidence that the final issue in the story will be as exciting as what went before.

"Next issue: Ratchet vs. Megatron! Grimlock's Pretenders vs. the Sports Car Patrol! Optimus Prime and Scorponok vs. Starscream! Don't miss the big battle issue as metal meets metal WHEN TITANS CLANG!" Sounds fantastic. Try to stop me from reviewing this book next week! Oh, wait, that's BotCon... well, maybe you'll have to wait two weeks then. Oh, wait, the second Almanac is out in two weeks... ummm.... well, it'll be soonish, anyway.  All the Familiar Faces! is available for purchase in IDW's Classic Transformers Volume 4

I'm usually not one to complain about covers, but I agree completely with your comments on this one. I've always thought this image (and the captions) fit the previous issue better (if indeed, it should have been used at all. Last issue's cover fit that issue just fine.).

One thing that strikes me as curious is that the Classic Pretender robots are all drawn according to their original character models, rather than their Pretender ones. Contrast with Optimus Prime whose cab-only robot mode started off in a similar manner but by this stage it's clearly the Powermaster character model.