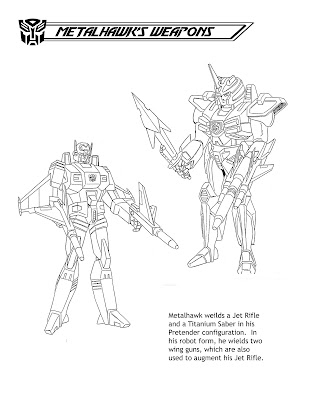 Well, after a break caused by finishing up the AllSpark Almanac II, (and expect a wrap post about that in the near future) The Ark Addendum is back.  This week, I figured I'd go back to Japan for some Masterforce!

Looking through my notes, it looks like I've yet to do anything with Metalhawk, leader of the Cybertron forces for the first handful of episodes. He eventually cedes that role to Ginrai, the reluctant hero. Having the real leader of the Masterforce war come in later necessitated this placeholder leader, and Metalhawk fills that role admirably. He's got some of the confidence of a leader, and yet always comes across as just a bit uncomfortable.  I rather like it. I'd have been happier had he been given a bit more to do in the latter half of the season, but they make up for it by having him be one of the few Autobots to remain behind on Earth after the series ends.

I've got both an extended transformation sequence for him, as well as his weapon details.  I thought the weapons would be a nice place to start.  He, like most of the model in Masterforce, had designs with both their weapons in hand and with their hands free.  For The Ark II, I elected to use the empty hands whenever possible, but I'm glad to be able to share the weapon shots as well.
Posted by Jimtron at 10:22 AM

Hurrah! More Masterforce! I knew it would be worth continuing to check back every week. More, please!