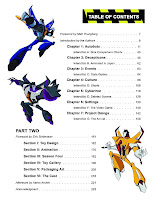 Well, BotCon 2010 is behind us, and the  The AllSpark Almanac II

(preorder it today!)  is due out in two days.  It's time to stop teasing and bring out the real meat of things.  That's right, the traditional five-page preview.

Starting off with our Table of Contents... this gives you a nice overview of everything in the book, and features a bit of really cool box art.  My favorite piece is probably the Thundercracker, by cover artist Marcelo Matere.  That guy has serious talent. you can see how we've broken the book into two parts, with all traditional elements from the first book present.  Well, almost all; we didn't have any new human characters, so that chapter went, and the Detroit chapter was replaced with one on Cybertron.  Still, this page more than any other gives you a sense as to the organizational scheme we were using. 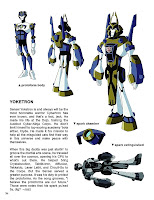 The first two chapters are devoted to Profiles; first Autobots, then Decepticons.  Season three gave us a plethora of new models and characters.  There were 34 pages of Autobots, and then another 16 pages of Decepticons.  There weren't so many Decepticon cameos in season three, but there were a ton of Autobots for us to delve into.  If the character appeared (and wasn't some kind of weird animation error), they got a full bio from us.  Now, some of them were two or three guys to a page, depending on how many images we had for them.  But they all get a bit of characterization, of which Bill and I were very proud. 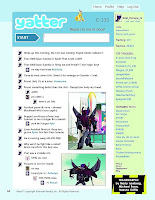 Episode guides! We only had thirteen episodes to play with, and we took 21 pages to tell those stories.  That works out to about 1.5 pages per episode.  Transwarped, in particular, we had a lot of fun with.  Here's one of the more unusual ones, a page from The Headmaster's Yatter feed.  Yatter, by the way, is the Transformers equivalent to Twitter. I spend time on Twitter (as Sentinel Prime) and it seemed like a channel that the Headmaster would be more than happy to use.  This was one of the most fun pages in the book for me to write; it was almost effortless.  I hope you enjoy it, and the many other funky episode guides we've concocted for you.  Of course, there are plenty of Autobot Incident Reports and Decepticon Logs for you to read as well. 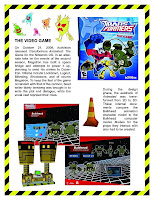 We can't forget the interstitial pages, now, can we?  These are the out-of-universe pages in part one, delving into unusual corners of the universe. We get to look at the Hasbro Style Guides, cover the comedic animated shorts produced, see the story boards of some deleted scenes, take a closer look at the whys and wherefores of The Arrival and the Animated video game, and more.  The size comparison chart was particularly difficult to put together.  Almost every episode that introduced a new character had one, and I was able to compile them all together into one massive sheet.  A few of these showed up elsewhere, in this book and the prior one, but this is the mother load. 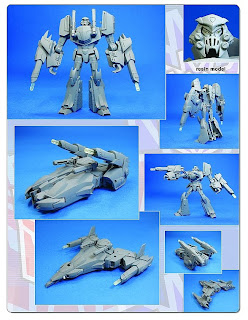 Finally, and I'm being intentionally cagey here, a page from part two.  The audience at BotCon flipped out when we showed them this one, the prototype to the triple changer Marauder Megatron toy.  Sadly, this idea had to be abandoned by Hasbro when the line ended at Season Three, but isn't this just a gorgeous model?  I am incredibly grateful to Hasbro for sharing this and other really cool designs.  We've hardly ever gotten to see material like this in the past, and I'm honored and humbled by their trust in me.  material like this helps make The AllSpark Almanac II really special to me.  We've got 8 pages on toy design, 12 pages on how animation is done, 8 pages on what Season Four might have been like, a complete toy and packaging art gallery, and an overview of the cast.  That last one was made possible by the generosity of the voice acting cast with their time.  I met every main cast member and got the chance to speak with them about their thoughts on the show.  The fruits of those conversations are one of the cooler parts of Part Two.

AWESOME! Can't wait to get the book!

Looks fabulous! I decided to sacrifice a discount to get it sooner, before I have to travel (really Amazon? 15 days late). The Megatron toy looks fantastic! Would that have been a voyager? Who designed it?

Glad you like it, Anonymous. Details of the creation of the toy are in the book. (I can't give away ALL my secrets, now, can I?)

thank you so much for this book man cant wait!

That Megatron is so beautiful.

Yoketron - weeeeee!!!! I remember reading once that Derrick said that Yoketron would have transformed into a Cybertronian racer - any pics of this in the almanac - do they even exist?

Racer? I heard something different. Anyway, for Yoketron, what you see is what you get, though there's more material on Cyber Ninjas elsewhere in the book.

Hey, Anonymous. I'm not sure how/why Amazon is showing what it's showing. Last year, people got their books considerably before their estimated due dates. Maybe history will repeat itself.

is there a way to get that megatron toy it rocks