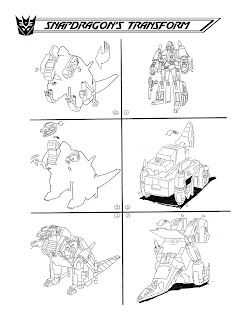 What's this?  I didn't skip a week?  Amazing!  Maybe I'm actually settling into the new house.

The Ark Addendum for this week is, as promised, the other half of Snapdragon's Transform, this time to a dinosaur.  While his jet mode is, in all fairness, pretty decent, this mode suffers from triple-changer-itus.  His head, specifically, seems too small for his rather massive torso.  His arms a pretty puny too.  (I know, the t. rex has small arms, but his are especially awkward.)  Using the legs of Krunk as the working jaw was a pretty clever idea, though, and one of the redeeming features of this figure.

HAPPY BIRTHDAY TO BISH!!! Longtime contributor (and wouldn't it be nice to get him back?) David Bishop turns 26 today.  Kick some ass, friend! 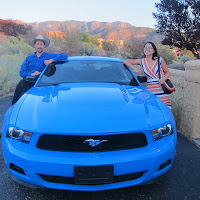 Settling into the new home.  Just last week my folks bought me some new flatware to replace our ancient and mismatched set.  We also picked out outdoor furniture for my various decks and patios.  Still to be done, interior furnishing!

I figured that, since I've been talking about the move-in a lot, I should post at least a few photos, so here goes.  Let's start with the new car!  We picked up a 2012 Mustang to replace my aging 2001.  My wife and I love it, it's zippy and nice to look at and comfortable to drive. 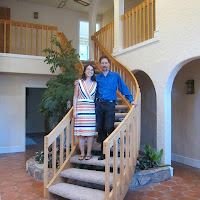 And here's a pic of the interior of the house, the curved stairway to the upstairs.  My folks were visiting last week for the Albuqerque balloon festival and snapped some pics for us.  There's more on my facebook account if you're interested!
Posted by Jimtron at 11:30 AM

Great looking place! Does the collection have its own room, too? :)

Trying to decide how to best display the collection right now.

Good to have you in town! We should get the ladies and do dinner one of these nights.

Definitely, Scott! (Readers, Scott is a local GM here in Albuquerque, an author and all-around cool creative guy, and one my my first friends in the area.)