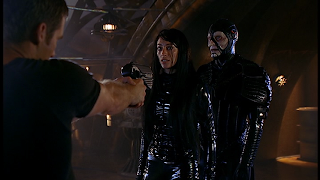 Let's do it Farscape style, no?  When last we left our heroes, they had just discovered Aeryn and Scorpius, together, Aeryn in bad shape.  S04E05: Promises picks up there (hey, it's Farscape, I wouldn't put it past 'em to go to a completely different plot) and we learn that Scorpy has saved Areyn... in exchange for asylum on Moya.  Only Aeryn's promise restrains John.  It's an... awkward development, to be sure.  Worse, it feels like a retread of Crais' arc, so recently and satisfyingly concluded.  Scorpy promptly gets rid of Harvey, probably because having two of them running around on Moya doesn't make much sense... but then, that only underscores how awkward a fit Scorpy really is on the crew.  On the plus side, Aeryn in a cooling suit looks hot.

Geekintology is here in plenty.  "Knock knock... candygram!" is a nice Blazing Saddles nod.  There's also a lovely sequence where a frustrated John asks Scorpius, "Kryptonite, sliver bullet, Buffy, what's it gonna take to put you in the grave?"  This isn't the first Buffy the Vampire Slayer reference we've heard, but it's a good one.  I can't remember if Superman has popped up before either... I feel like he must have.  There's also a bit about how Moya must have a sign offering free HBO, not really geek culture but definitely pop culture.

S04E06: Natural Election features the crew's attempt to pick a leader.  After defeating the plant infestation, the crew selects D'Argo, which is a nice subversion of expectations.  John didn't get a single vote, which puts him behind Scorpius and Rygel in that respect.  Cute.

As far as the geek goes, John quips of the plant monster, "seems that Audry has taste," a Little Shop of Horrors nod.  Noranti is called 'school lunch lady', which is pretty cute, and Glenda, which is another Wizard of Oz reference.  PBS is also namechecked.

S04E07: John Quixiote makes up for it.  It's a real oddball of an episode, even by Farscape standards.  Stark has unleashed a VR game into the universe that involves events from their past, starting with the Gammak base where Stark encountered the gang.  Crichton and Chiana get trapped in the game, and it seems like it was designed to capture Crichton. 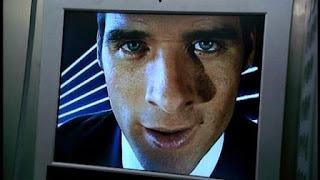 I like the chance to see Stark,  Zhan, Jool, and Crais, though in bizarre and stylized forms.  Seeing how Stark perceives the rest of the crew and himself (Scorpius as a fop, Crais as an ogre, Aeryn as a twit, John as bizarre, and himself mirror imaged) is kind of neat. The writers use a clever little trick to try to convince us that the characters really did get out of the game about halfway through the episode, by having John use the game in a simulation of Moya to try to combat Scorpius.  Still, it's hard for me to accept that Stark was trying to capture/kill/lobotomize Crichton.

The geek! First off, the John in the game is a video personality based on Max Headroom.  (I'm skeptical that Stark, taking the dying John's memories, got to Max Headroom, but it's still neat.)  He gives the real John his marching orders by saying "your mission, should you choose to accept it," from Mission: Impossible.  There are nods to classical fantasy and nursery rhymes.  A Sheyang in the story is called the frog princess, and we get namechecks for Grettle and King Arthur.  Finally, John Headroom suggests possible names for the real John's VR sword: Cameron and Uma, presumably for James Cameron and Uma Therman.

And that seems like a nice one to end on.   The season is still wobbly, and will be for a few more episodes before finding its real footing.