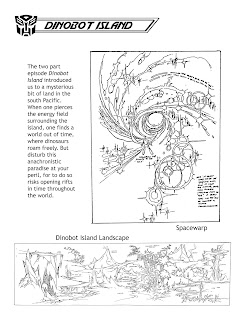 I thought I'd take a break from the Japanese series to see what I had left from the US.  To be honest, it's not all that much at this point.  Still, going episode by episode, I managed to locate some gems from Dinobot Island.

Funny story... I recently finished writing an article for the G.I. Joe fanclub magazine about crossovers, including a character model for Hector Rameriz done up in the style of the G.I. Joe Field Manual.  I rattled off a bunch of crossover events and considered bringing up this one.  Ultimately I opted not to.

You see, G.I. Joe featured an episoded, Primordial Plot, where Cobra cloned some Dinosaurs on an island.  Could it be Dinobot Island? Well... probably not.  There are too many differences.  It's clear that Dinobot Island exists out-of-time.  It's surrounded by an energy field, and when the Decepticons begin to extract energon from the island it starts to open time portals.  It's a bit too much for me to accept that Cobra happened to be cloning dinosaurs on an island where there were strange fluctuations in chronal energy.  (I'm sure James Roberts could tie it all up in a story, but I didn't want to do too much hand-waving in a non-fiction article.)  I think it's more likely that Don Glut really liked dinosaurs.
Posted by Jimtron at 7:44 AM

Which issue number does this article appear in?