It's been far too long, but Farscape is about to enter its fourth season here on Disciples of Boltax.

Things open unevenly with 4x01 Crichton Kicks.  Our man John has found himself an elderly leviathan, Elac, so he hasn't run out of food or oxygen yet.  Heck, he's even just about cracked 'wormholes for dummies,' a non-genre pop-culture reference.  Things get interesting when a new girl, Sikozu, shows up with some Leviathan hunters hot on her tail.  We also learn that Grayza has put huge bounties on all there heads when Chiana & Rygel return.

Mixed though the episode was, it introduces Elac's DRD 1812, John's new pet.  He's awesome, and Bill named a snake after him.


In terms of sci-fi goodness, there's plenty.  Crichton calls the villains of the week Klingon, and even goes so far as to bark some Klingon phrases at them.  Yup, John studied at least a bit of Klingon at some point or another.  Wild.  He also calls them "Pirates of the Caribbean," after the ride, (Farscape predates the movie franchise) and Slaughterhouse Five in reference to them cutting up the Leviathan.  Finally, both of John's nicknames for Sikozu are at least a bit geeky, as he calls her Tinkerbell (as she's so small and light) and Sputnik (after her hairstyle.) Non-genre references include Mother Theresa, Jacques Cousteau, and Baywatch. 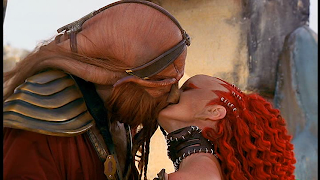 We then move on to the two-part episode, Sacrifice, 4x02 and 4x03.  D'Argo and Jool have struck up a relationship on an archeological dig.  Interestingly, John finds a toy with Egyptian, Sebacian, and Interon symbols on it.  This will prove important in The Peacekeeper Wars, but this episode sort of drags.  We learn that Scorpius has fallen out of favor with high command and seemingly see him shot and buried alive by Braca. Jool stays behind in the end, as we've swapped one intellectual red-head with strange powers for another.  Odd choice.  They must have really not liked her.

References include The Simpsons, as John calls Braca Smithers.  He also paraphrases Dirty Harry, rather hilariously. "Now, I don't know if you fired 500 shots or 600...", and calls a swamp monster "the creature from the Black Lagoon," Non-genre references include calling Grayza Mata Hari after the infamous WWI double agent, Steve McQueen for his part in The Great Escape, and baseball players Gaylord Perry and Joe Neikro.

We move on to a nice pun, Lava's a Many Splendored Thing, 4x04.  (Of course, a reference to the book & film.)  The gang, suffering from GrandmaNoranti's cooking, make a pitstop near a cache of wealth and interrupt some burgers. They've got shield belts that protect them from weapons fire, and lava is indeed everywhere.  It's a fun little episode, though you start to feel the lack of Moya and Aeryn right about now.  To be fair, they show up right at the very end... but that'll have to wait for next episode.

We get another Wizard of Oz nod, with the head baddie called 'Tin Man.'  John also calls one of his henchman 'Redshirt,' after the tendency of members of Kirk's away team to die horribly.    Non sci-fi references include the three stooges and Abbot & Costello (again), the city of Pompei, and the old Life Cereal commercial.  "Hey, what do you know? Mikey likes it."

Rocky start, for sure.  The show doesn't seem to know what it wants to be without the overarching threat that was Scorpius that we've had for over two years now.

On to the Field Manual!  We're up to 9 Amazon reviews.  Seven were five stars, but there's a one and a two in there too.  Sigh.  There's also a nice discussion of it on the Powetcast Podcast episode 137: http://powet.tv/powetblog/author/admin-2/ Check them out, they seem like cool guys.
Posted by Jimtron at 2:52 PM

I still don't understand how you could be unaware of what your purchasing when it so explicitly explains it under the Book Description, to say nothing of actually SHOWING the first few pages- and to say that there is "nothing new" where the text is concerned is also inaccurate.

To complain about this "may not be what you think it is" just smacks of pure BS. This book is precisely what is stated in the description.

Incidentally, the sheer level of visual detail I really enjoyed. Whole pages devoted to incidental characters (Honda Lou has her own stats, how cool is that?), variations on the characters different looks (The Oktober Guard and Cold Slither even make an appearance), weapons (Lady Jane's arsenal of javeline's is showcased), vehicles, etc. This book is not only what you want it to be, it's more then what you expect. Bottom line it's nothing short of excellent in it's content. If I had one complaint, it would be the grid underlain below the artwork, but even this is minor and forgivable compared to the amazing and comprehensive content.

Kudos for this. These kind's of art-books aren't sold in the State's nearly enough, so I hope you continue to make them.