The Ark Addendum - Diver's Transform (and Farscape's Geekwatch marches on!) 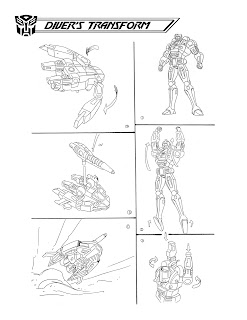 Filling in the gaps in previous series continues with Diver, the last Pretender I'm missing from Masterforce.  (Martin, who am I still missing now?)

I think my favorite bit from the Diver model isn't represented here.  It's the tattoo on his human form that reads "perked up anchor."  Oh, Japan!

Farscape Geekwatch!  S02E06: Picture if You Will features the return of Maldis.  We won't see him again (though, without looking it up, he seems like a sure bet for a comic appearance) but he'll be mentioned a few more times.  I hated the character the first time through, seemed too mystical for my taste, though really in retrospect he's not much different than Q or Trellain or any other energy being.  The geekiest bit in the episode is when Crichton criticizes Maldis for not reading the supervillain's handbook.  Not specific, but geeky none-the-less.  (specific non-geek references include The Price Is Right, The Sound of Music, and Magical Mystery Tour.) 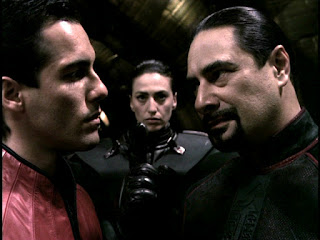 S02E07: The Way We Weren't is an episode largely motivated around a series of flashbacks to the days of Crais and Aeryn as Peacekeepers.  Man, if they'd made Crais this badass in S1 they might not have had to replace him!  Nothing too geeky here, though John saying that "I don't think Pilot's in a 'Leviathan for Dummies' kinda mood right now" almost counts.

I'll end with S02E09: Out of their Minds, a hilarious episode with body swapping all around.  No geek references here, I'm afraid.  No real references of any kind that I noticed, outside from Crichton calling Rygel (in his own body none-the-less) Einstein and referring to his body smacking his ego (residing in Aeryn's body) as a Three Stooges routine.  I'll forgive much, though, since John goes ahead and takes advantage of his time in Aeryn's body to feel up her boobs, then dance around with her shirt open.

is available for purchase on Amazon, and unless you're homeless you should own it.
Posted by Jimtron at 10:43 AM

Well, since you ask... Pointblank and Sureshot, I believe!