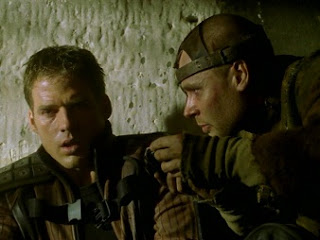 What could be more relaxing than Farscape Geekwatch? S01E20: The Hidden Memory,  continues the plotline set up in Nerve. What strikes me as interesting about this episode is how many of the guest stars go on to become main characters.  Lani Tupu, Gigi Edgley, Wayne Pygram, and Paul Goddard all join the cast as title characters.  Gigi as of next episode, the rest as of season three.

In therms of the Geekwatch proper, not so much.  Scorpius' female assistant is called Peacekeeper Barbie, which probably wouldn't have registered at all if I hadn't spent so much time at the Mattel booth.  Melrose Place also gets namechecked.

SDCC was fun and productive.  I did a lot of networking, checked in on some existing projects and tried to generate a few new ones.  Two look quite promising, we'll see.  To me, the highlight of the con was being on line for the Ben Ten panel (with Derrick J. Wyatt as the art director of the new series, Ben Ten Omniverse).  There was a nine year old boy dressed up as Ben, complete with jacket and Omnitrix, with a Fringe hat and a Mass Effect sword, enjoying his first convention ever.  He was hyperactive and nuts, attacking me and my phone and my laptop and foiling my evil schemes and throwing out trash for his dad "Operation: Garbage Scow.  Pew pew pew!" I asked Derrick to hook him up with a poster or something, and he assured me that he would.  It reminded me of my first convention, I-Con 7 in NY.  I got to meet Gary Gygax, and was so nervous, but the man was super cool to me.  I was glad to be able to give a little bit of that back.

is available for purchase on Amazon, and by this point in the series, things are looking up.