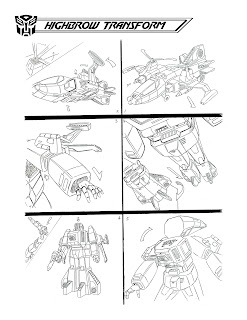 Howdy, y'all!  Sorry that it's been a while since I've posted here.  I'm in the process of moving my wife and I to Albuquerque, from New Haven and Los Angeles, respectively. This includes the purchase of a new home, which has taken up much time and energy.  Between that and ComicCon this weekend, I've been swamped.

However, I didn't want to neglect you, my loyal readers, so I checked Martin's wish list and found Highbrow's transformation.  Here it is!  It's one of the more elaborate ones.  Note how, though there are only six frames, three of them have insets. My favorite detail has to be the inset of his gun, popping into his hand, in step 6.

A funny sidenote: Gort got his own transform, which I'll try to clean up and post next week.  Most of the Master guys didn't, or got a very very simple one.  His is fully detailed.  I wonder why.


I've also been neglecting my of Farscape Geekwatch.  We've watched a few more.  There's kind of a dearth of genre references, though, so I can reasonably do this quickly. 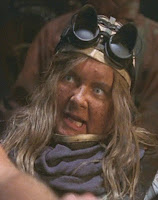 S01E11: Till the Blood Runs Clear.  No real sci-fi references to speak of, though Crichton references Butch Cassidy & the Sundance Kid, as well as Disney's Pluto.  This episode introduces Furlough, the hefty mechanic, who will play an important role in season 3.

S01E12: Raphsody in Blue. An important Zhaan episode, wherein she gives up her frock.  Again, no genre references.  Could my memory be failing?  Perhaps later seasons will pick it up a lot more.  Looney Toons gets name-checked, at least.

S01E13: The Flax.  We're introduced to a new tech, the Flax, an invisible web that will play a role in the S2 three part season ender.  AGAIN, no sci-fi or fantasy references, though Top Gun is mentioned. 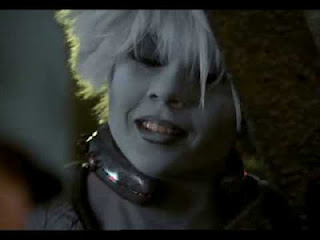 S01E15: Durka Returns. A solid Rygel episode, where his old nemesis returns as an apparently brainwashed ward of a new race, the Nebari.  Chiana, a Nebari prisoner who really just wants to live a little away from her stifling culture, is a welcome new addition to the crew.  Not quite genre, but worth mentioning.  John: "Durka's gone Hannibal Lecter on us." To her credit, Chiana calls John on his incomprehensible (to anyone on that side of the galaxy) speech.

is is for sale on Amazon.com, and I'll get through a few more before ComicCon if I can.

Thanks Jim, and good luck with the move!