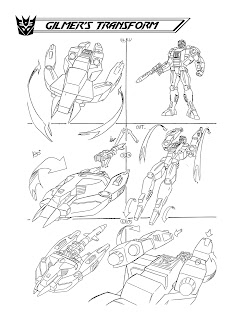 OK, starting to resume a more normal posting schedule despite the move.

This is a great transform, no doubt.  I love how step three just runs right off the page.

I'll also finish of season one of my Farscape Geekwatch.  S01E21: Bone to Be Wild.  First off, as puns go... ugh!  Really?  SO painful.  (It's about a bone-eating carnivore, played by Ben Browder's wife.  She'll return in each subsequent season... as a different alien each time.  Fun stuff!)

Two good Geek references here:  "One, two, three, four to beam down, Pilot," quips John, in a beautiful Trek reference.  (Though next episode has it beat.)  John also remarks, of the botanist of the episode, "Swamp Thing here ain't the Mr. Rogers scientist we thought he was."  Nice DC Comics shout-out, and juxtaposed with Fred Rogers no less.  Fun!

(Stark is nowhere to be seen.  Somewhere a line of dialog about him taking a Transport Pod out into the asteroid belt got lost.  Boo!  We also meet Lieutenant Braca, though he isn't named yet.  I like Braca.) 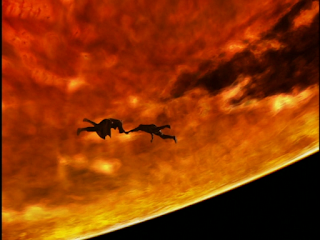 S02E22: Family Ties, finishes off the season, and finishes it off strong.  Rygel tries to sell out the crew, only to find that Scorpius isn't interested.  Crais uses it as an opportunity to jump ship and eventually absconds with Talyn, Moya's offspring.  John and D'Argo manage to outmaneuver Scorpius and blow up his base, though they're left floating in space with Aeryn unable to rescue them due to heavy Prowler patrols.

Only one geekwatch here, but it's a goodie.  As Crichton and D'Argo prepare for their spacewalk, he refers to them as Kirk and Spock, then as Abbot and Costello.  It's a great moment.

(M'Lee, the bone eater, is acknowledged as having gone off somewhere in a Marauder.  Scorpius wondered where the security officer assigned to her had gotten to.)

Thus ends Farscape, season one.  Slow to start, but really gets there in the end.  Crais never worked as the main villain of the series, but as a wildcard with family ties to Moya, he seems right at home.  Scorpius is magnificent as the big bad of the series.  Ben seems to have found his Crichton, with a bit more madness thanks to the Aurora chair and looking kinda bad-ass in his Peacekeeper Command get-up.  (He'll stick with that, with a few minor alterations, for the rest of the series.)

is available for purchase on Amazon, and I just love it.  It was slow at first, but now it's kicking ass.
Posted by Jimtron at 12:43 PM

Continues to be appreciated. I trust I'm not the only TF fan in the world who's collecting these things and made happy when team sets are completed...? Or maybe I am! :)

PS I love the fact that below the box I'm typing in I'm challenged to "Please prove you're not a robot." It implies that Masterforce Pretenders would give themselves away through their responses...