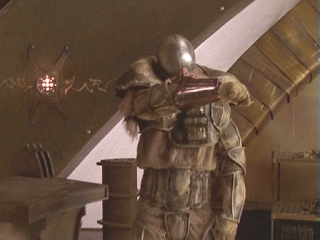 is for sale on Amazon.com.  Should you get it?  Well, not for this episode, but... better days ahead.
Posted by Jimtron at 4:48 AM

Never found the time to watch the show but I remember it striking me as appearing better then some of the others Sci-Fi had at the time. It had that shot on film look that ST:TNG had. I would guess they had some of their actors under special contracts because they'd show up in other SF shows, Ben Browder being one example.

It's a fantastic show, one of the best space operas out there. It starts slow, but by the end of S1 it gets there.

I'll have to start watching it then, at least when I get a spare second again.