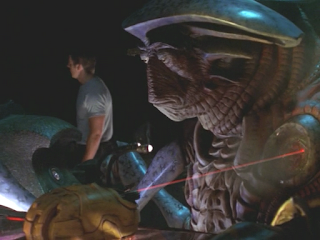 is for sale on Amazon.com, and I suppose there's not too much to recommend the series yet.  Still, it gets better, I promise.
Posted by Jimtron at 4:55 AM

I have been slowly picking my way through Farscape as well and I agree that Moya's baby is, by far, one of the most intriguing elements of the show. I thought about the whole 'living ship' motif from HAL in 2001 Space Odyssey to River Tam pretending to have melded with Serenity in Firefly and I think that Farscape does something clever, and fresh while still staying true to the genre conventions.