Review: War of the Worlds, the series ep 32 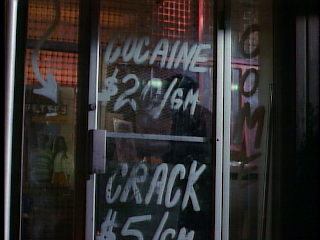 Synthetic Love is the thirty-second episode of War of the Worlds, the series.  It features an alien plot to distribute a drug based on human brain matter to the population, in a society with a run-away legalized drug problem.  When Kincaid strong-arms an addict friend of his into going to a rehabilitation clinic where this drug is being distributed, the team learns of the plot and... well, they don't exactly foil it.  The company distributing the drug does that once they find out what's in it, though at great personal cost.
The Good: Not all that much.  Bayda is back, which is nice.  She's a nurse at the clinic, cold and lifeless as ever. 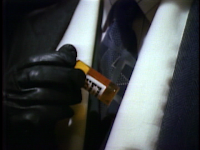 When Mr. Laporte, head of Laporte Pharmaceuticals, rejects his alliance with the Morthren, they kidnap his daughter and use her as raw materials for the drug.  The moment when Malzor (under his alias of Mr. Malcom) hands him the vial of, well, her, is pretty horrible.

Using human brains as a cure, at least, is something grounded in WotW mythology.  We've seen it previously in To Heal the Leper. However... well, we'll get to that. 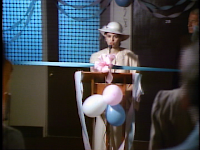 The visuals in this episode were nice.  I particularly liked the make-up and costuming on both the addicts and on Rene Laporte.  The contrast between her almost Jackie Kennedy Onassis wardrobe and their filth was well executed.

The Bad: There's a lot wrong with this one, unfortunately.  Let's start with the episode structure.  Kincaid doesn't show up till about 12 minutes into the episode, and Harrison for another 8 minutes after that.  In a 44 minute program, that's pretty ridiculous.  The alien plot, such as it is, never really gets stopped.  Sure, Laporte stops distributing the drug, but as Malzor says they can start again at any time.  Basically, Kincaid realizes something is wrong when his friend goes missing, infiltrates the rehab center, gets capture, and gets rescued.  Meanwhile, Laporte distributes a drug, figures out they shouldn't be, and stops.  It's really not very satisfying. 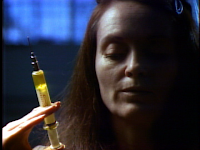 The alien plot, too, makes little sense.  What exactly are they trying to accomplish?  They're giving out a drug that seems to cure humans of their personality defects.  What negative effects there are, if any, aren't clear.  Kincaid seems spacey when he's on it, but that wasn't emphasized in the episode.  Besides, one would imagine that that would wear off.  Was it addictive? Who knows!  Maybe the aliens just wanted cash?

The episode is very heavy-handed in its politics.  Legalized drugs are apparently the cause of a lot of this societies woes, causing the "final collapse of the welfare system" despite what experts predicted would happen.  It seems to be ignoring a cardinal storytelling rule; they tell us, rather than showing us.  We're not told why legalizing drugs was bad, just that it was.

The plot also feels redundant.  So Shall Ye Reap featured the aliens attempting to infiltrate the human drug market.  Been there, done that. (Oh, BTW, it was pretty clear in So Shall Ye Reap that drugs were still illegal.  Now, we learn, they've been legal for four years.  Another timeline hiccup.) 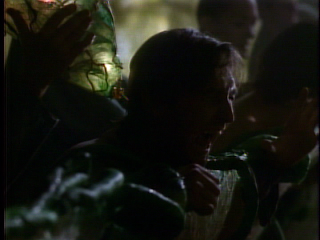 Overall, a weak and emotionally unsatisfying episode.  The alien plot had been done before, and didn't make much sense anyway.  It wasn't really stopped, and our heroes seemed almost like afterthought additions to the story.  You can do better, War of the Worlds, so much better.

, will be out on DVD this October.  Preorder it now, if you're enjoying these reviews and think it's your thing.
Posted by Jimtron at 10:52 AM

I must say, I did like the direction by Francis Delia in this episode. My favorite scene is the one you mentioned with Malzor handing Renee to Laporte. Nicely directed and executed.

My main problem with the episode as well what the aliens goal was with this drug? I don't see how it will accomplish their long-term goals of conquering the planet. Also, the revelation that drugs has been legal for several years is another problem. Debi would have been a young adult at this point.

Also, I will not even begin to go into the ridiculousness that is the Kincaid/alien kung-fu fight sequence....

yes, this one is worth passing by... it's all clumsy plotting without clear meaning or purpose. it's like the writers said "we need to reference current events in some future-looking manner" and they pulled the argument about legalization of narcotics/street drugs in, mixed in the questionable ethics of a pharmaceutical corporation (nice to see they still live quite comfortably in Almost Tomorrow-land, sigh), and some "horribleness" of killing people like cattle (did we miss that from S1?). these items don't make a story to tell.