Review: War of the Worlds, the series ep 28 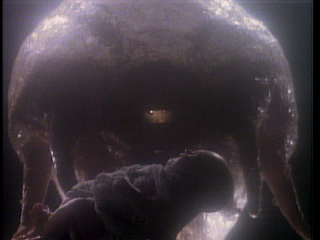 The twenty-eighth episode of War of the Worlds, the series is titled Breeding Ground. A medical supply shortage sends Harrison to the Metro Hospital, where he stumbles upon an alien breeding program.  An old friend of his is helping the aliens implant seeds of the Eternal into human hosts, including a rather likable old lady named Kate Barrows.  Though the team manages to abscond with her, she escapes and returns to her hospital, where she delivers the first Morthrai to be born on Earth.  Her physician, Dr. Justaine, is killed off by the aliens for his trouble, but they allow her to live on with the memory of her loss. 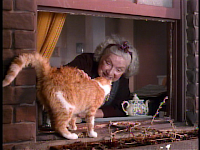 The Good: Quite a lot, actually. The acting was great all around, especially Helen Hughes stint as Kate Barrows.  Before her ulcer perforates and she winds up in the hospital she seems sort of carefree despite the lack of her welfare check (the department is on strike) and her pile of bills.  Unable to have children, her maternal instincts have been directed towards her career (in her youth she was a dancer of some renown, Champagne Katie) and her cat.  After she's checked into the hospital without insurance, miserable, she just exudes pain, but Ms. Hughes doesn't overplay it.  The character is doing her best to be stoic.  After she's impregnated with an alien seed, she becomes confused but ecstatic.  Finally, once the aliens abandon her and take their offspring with her, she's broken, sitting alone in her house with a cured ulcer but a loss she had never before known.  Her arc is complete, leaving her physically better off but emotionally broken. 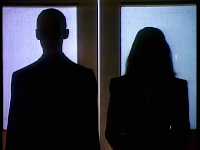 The directing was also quite nice in this episode.  I rather like how creepy some of the shots were, including the first silhouetted appearance of Ardix and Bayda.  The tension stays high this episode, with some rather poignant moments to offset the horror.

Hey, speaking of Bayda, last seen in Doomsday, it was nice to see the return of Ardix's accomplice.  I wonder if they were purposfully going for names evocative of the alphabet, or if that was a happy coincidence.  In any event, I like this sort of continuity.  There was great dialogue between them, especially when they observed how humans treat their elderly and their diseased "like so much refuse."  They also explain away some of the logical faults of the episode with some rapid fire-dialogue.  "We should have done this at our base," she scolds, but he rebuts that they don't have the equipment.  "We should have cloned the doctor," she continues, but the doctor is too old and sick to survive the process he replies. 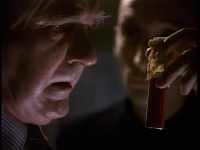 This episode is the first one where the "Almost Tomorrow" is starting to live up to its potentials.  The shortage of 'Megacillin', off-hand references to another Senator skipping bail, level-five pollution alerts, and of course the Georgetown Epidemic.  The latter was an important motivating factor in the episode, as Doctor Justaine was a brilliant surgeon who tried to help out with this Epidemic, only to later find out that it was a man-made disease that got loose.  He lost all his patients, leaving him broken, and later found out that he was infected with the disease.  The aliens offered him a cure, temporary as it turned out, which is why he was willing to sell out other members of humanity. 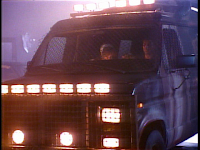 I've mentioned it before, but I think that Kincaid's battlewagon is pretty cool.  It features in an extended battle sequence where an alien tries to run them off the road.

In that same sequence, Harrison completes his journey to action hero.  Though he's been handling weapons for quite a few episodes now, I believe that this time is the first time he'll actually discharge a handgun at an alien.  Even now, he hesitates and has to be goaded on by Kincaid.  Given the airing order flub that this one represents, that means that it took him four episodes to transition away from his pacifist roots that he managed to more-or-less hold onto in season one to his new season two persona.  As that the season is only 17 episodes long, that's nearly a quarter of the story devoted to this evolution.


The Bad: Let's start with coincidence, again.  Suzanne gets sick, prompting the team to look for medicine.  Harrison happens to know a brilliant but broken surgeon who might be able to get him some, and just so happens to be in the hospital when the first victim of the alien breeding program goes on a rampage.

Suzanne mentions that the aliens have done breeding experiments before.  I'm wondering exactly what she's referring to. Unto Us a Child is Born springs to mind, though really that was an accident and the team knew it.  My Soul to Keep involved aliens attempting to breed, though no humanity was involved.  There were plenty of experiments done on humans in He Feedeth Among the Lilies, though those resolved around the immune system.  I wonder if McCullough commingled some of those events in her mind, or if there were some other alien experiments foiled off-stage.  This isn't a horrible 'bad', by any means, but as continuity nods go it's not great either.  I guess points for trying, though.  In a similar note, this episode unfortunately aired after Terminal Rock, which references 'only one breeding success.'  Whoops, guess they flubbed the airing orders there. 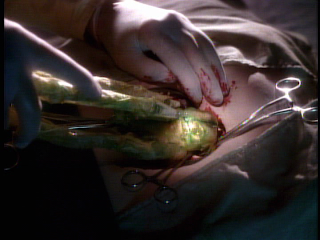 The Ugly: Alien surgery, though not nearly as gruesome as some of the S1 material, still counts as ugly in my book.  I couldn't tell from Youtube, but it seems that the alien surgical tools are variations on their three fingered hand, which is a nifty idea.

So, there you have it.  Aliens attempting to incubate their young in human hosts.  It's not QUITE an idea we've seen before, as I point out above, though it's not a wholly new idea either.  However, it's saved by its execution.  Aside from how the team finds out about it in the first place, which will unfortunately be endemic this season, it's really quite solid. Let's hope that there are more like this ahead.
Posted by Jimtron at 10:58 AM

Great review of "Breeding Ground". I must admit, that upon a few viewings, I find this episode rather solid as well. I think in particular, the use of Ardix and Bayda were indeed creepy. I think the false kindness that they displayed to Kate were probably the creepiest. Julian Richings was especially great in this episode.

By the way, Kincaid's van is actually Norton's green van from season one, but just revamped. It looks actually pretty damn cool.

I do know that this episode was supposed to be third episode that aired in season 2, but I guess, the producers felt in terms of darkness, this episode should be one of the later episodes shown.

I agree, that was another great moment. Pretty much any time Julian Richings is on screen I lean in to see how he'll handle the scene. I find his choices to be consistently fresh and interesting. He really gets the alien thing. Terminal Rock had some good lines for him too; "I won't die here." Nicely defiant, Ardix!

i like this story more in hindsight and can't wait to watch it a second time. the first time i was unduly put off by what i thought was a very poor flub on the writing part (the above-mentioned "earlier alien breeding attempts" that got mixed up not by Suzanne but by the writers), and the overall feeling of "retread" after S1 traveled in the area of freaky hospital and alien offspring stories. looking at the whole, i think it's a natural progression since the Morthren clearly screwed themselves by converting their bodies to some artificial human form, so they had to do something to reproduce.

as for "ugly" i think the best creepy visual is the somewhat subtly viewed death scene of the first human victim of the implantation is a better choice. it's one of those gore-but-not-in-your-face-gore kind of things... what do they call that.. the judicious edit or something... it's off to the back, relies on sound more than visual to know someone is in terrible distress, and ends with a SPLAT against a translucent glassy wall. this is part of what i feel is a bit more care in cinematography on the part of this creative team as opposed to S1's cinematography (which was dead straight and not artistic at all).

also, note the three-fingered salad tongs used for the egg/seed implantation... the Morthren brought their native tools with them and they don't match up well to their humanoid bodies ;-) i think this was one of the new core concepts that didn't translate well to the final product as with other things that would have made the transition more sensible between seasons (like "The Immortal," the Eternal's dialog, the actual process of conversion of the aliens bodies to their human form... etc). wouldn't surprise me if Mancuso pushed this stuff off in deference to his own personal (flawed) ideology on aliens...