Review: War of the Worlds, the series ep 27 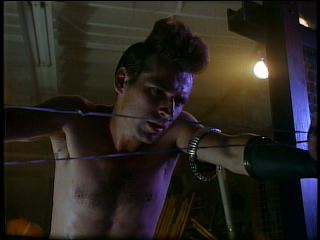 Terminal Rock is the twenty-seventh episode of War of the Worlds, the series. Tired of the dangers posed by the urban decay of Almost Tomorrow, the aliens attempt to harness human aggression.  Their chosen avenue is puck music, with a clone of Ripper, frontman of The Terminal Band.  Meanwhile, the team faces tensions of their own as Kincaid adjusts to sharing his space with outsiders and Debi has difficulty with the camped space. To seek solace, Kincaid finds the arms of an old lover, Rose, but her brother is involved with some dangerous folks. In attempting to help her with her domestic situation, he learns of the alien plot. He and Blackwood track the problem to the source, rescue Larry and thwart the alien operations. 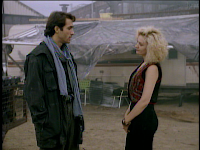 The Good: Great performances on the interpersonal relationships.  John and Rose, Rose and her brother Larry, Kincaid and McCullough, Suzanne and Debi. Plenty of great exchanges.  When Kincaid and McCullough start to snap at each other, Harrison tries to play the peacemaker. When Larry confronts Rose, a simple argument devolves naturally into physical violence.  Very nice directing here.

Harrison continues his character growth.  When Kincaid brings back an alien earpiece, the first experiment with musical control, Harrison and Suzanne want nothing more than to dissect it and run some tests.  However, when Kincaid insists on going back out into the world to try to find Larry, Harrison reluctantly arms himself and goes with him.  He's closer to being an action hero, but he's not all the way there yet.  Also, a bit of the old Harrison comes through when he fights off the alien mind control with multiplication tables. 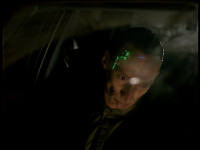 The aliens have some great moments too.  Ardix is nearly killed early on in the episode when random punks called Scavangers stream out into the streets looking for a fight.  This prompts Mana to boldly question Malzor.  Though Malzor refuses to seriously consider relocating their forces again, he lets her execute her music plan.  There's great tension between the two of them, and Malzor seems almost smug when her plan is thwarted in the end.  It's clear that he's reasserted himself as the alpha dog of the Morthren race.  I like that the dystopic setting negatively impacts the aliens as well as the humans, while simultaneously giving them possible vectors for attack.

As a part of the above exchange, there's a rather fascinating line-drop.  They've only been able to reproduce once so far, which will at the present rate of alien attrition (ten lost so far) will lead to their extermination in less than a year.  I think this episode may have been intended to air after the next one, which indeed features an alien birth.  I wonder where the ten aliens lost figure came from.  Quite a few perished in the first episode of this season, though those may not be counted as the dead were attributed to this quadrant.  I almost want to go back and skim prior episodes to see if that figure comes from anywhere.  In any event, ten dead is a big deal to them.  Depending on how much time has passed, that means we're dealing with at most a couple of hundred aliens.  Interesting...

The Bad: Coincidence.  It was bad in the first season, but it's terrible here.  I suppose that the aliens and the Blackwood Team are practically right on top of each other, but that only goes so far.

When Debi hears music coming from the earpiece, which she knows is incredibly dangerous, she holds it up to her head and it latches onto her.  The character just seems a lot more sensible than that.  She did a pretty good job bopping around, though, once under the alien's sway. 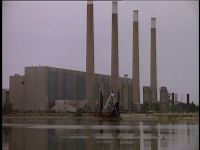 Choirs of Angels was one of the best episodes of season one.  This episode feels like we're retreading old ground.  It won't be the last time, either.  We also get a really clear look at the alien base.  It's really rather bland compared to the caverns of season 1.

I feel bad about putting this in The Bad, but there's a lovely scene of John and Rose making love.  It's sweet and tender, but it goes on too long and doesn't serve that much purpose in the episode.  Contrast to Harrison's relationship with Karen in He Feedeth Among the Lilies, where the tenderness of the relationship provided a necessary contrast to the brutality of the 'rape' that she had experienced and would experience again.  This time it feels out of place.  So, good scene, but it probably should have been saved for somewhere else.  Even if they'd saved it for the end of the episode, where it could have been a sort of reward for them, it would have felt a bit better dramatically. 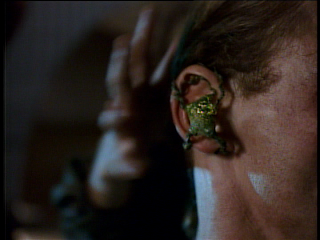 So, another mixed episode.  There are quite a lot of good elements, including better acting and directing than we often get, but they don't gel together as well as they could.  I'm still deciding how I feel about the new setting for the show.  It undeniably ratchets up the tension, but I don't think this episode really takes full advantage of the setting.  In a way, making homicidal street punks MORE homicidal is less frightening than turning more casual hard rock lovers violent, so the setting actually undercuts the premise of the episode.  Still, it's a step up from last week's offering.

Oh, and for those keeping track of such things, Debi's age is given as 13 this episode.  I don't remember hearing it spoken before, but she can't have been much younger than, say, 11 by the end of the first season, so we've got a maximum of about 2.5 years separating the two of them.  Yeah, I'm having a hard time with that too.
Posted by Jimtron at 1:07 PM

This episode is definitely not one of my favorites mainly because it seems to be based on the premise of "Choirs of Angels". However, I think the idea of an embed being able to sway the most deeply rooted psychological block is scarier than a device in your ear controlling you.

There is one scene that I really like though and that's the scene where Mana is instructing the Ripper clone:

And I think that line is punctuated by Mana sensually touching the Ripper clone's face. It's a very creepy yet sexy scene that is well played by Catherine Disher.

i'm more harsh on this episode than either of you... i found the retread of alien plots to be very annoying this season. this one is actually two in one: Choir of Angels and ... uh title... the one where they created special street drugs to make humans more destructive (both S1).

another criticism & pet peeve of mine: if you're going to do a story that has music in it (diegetic sound, stuff the characters hear), don't put that to the task of the show's primary incidental (non-diegetic sound) music composer. not only are they less suited for specialist sounds like live bands (portrayed weakly a couple times in bars and clubs in S2), they're likely not to hire session musicians/players to separate the two types of sounds. this is one of the problems with S2's production team. the two musicians on hire for the show are generally pretty good, but their palette of sound is very limited (and is very much the same as you'll find them using in the other shows they score, especially Manfredini in Friday the 13th the Series). it makes the diegetic sounds difficult to distinguish form the non-diegetic ("wait, is that real or fiction?"). Billy Thorpe's palette of sounds made this work in a limited fashion for Choir of Angels because he performed real guitar and because the mood was one of "winking at the audience" in homage to the show's own theme song. in the case of Billy Thorpe, the instrument playing itself was believable because it was really a musician who can perform the instrument, instead of the odd disconnection (or absolute silliness) of actors pounding on instruments, pretending to play them (and the even worse effect of pretending to play props that can't actually make sounds remotely like the music composed for playback in the scene).

speaking of music... anyone have the soundtrack for Season 1 anywhere? there was a promotional CD put out but i could never locate a source or MP3s...

overall, the character stuff is the true value in this episode, as you mentioned. the overdone sex scene is probably another effect of having the dark moody broody hero type character in the spotlight (look at the success Adrian Paul had with the "housewife" audience when Highlander got going... (same production company there, too, right?)... and the Mancuso show mentality... ;-)