Houston, we have a Winner! 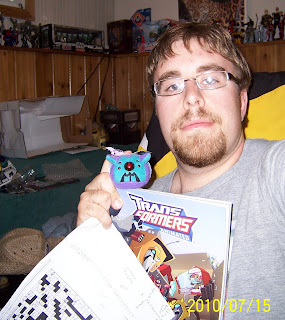 As some of you know,  The AllSpark Almanac II

(order it today!)  features a massively difficult crossword puzzle.  I don't mind saying that I spent about three or four weeks working on that thing.  It's designed to be completely solvable and to have as much overlap as possible.  To make it work, I needed a few non-TF words, but I tried to use Transformers clues for those words whenever possible.

Since it's a crossword with almost 150 words, I figured that I'd try to make it worth your while and ran a contest.  The rules were this: you have to get every answer correct, solve the word jumble, and then send me a picture of yourself holding the book.  (You have to put a face on the contest, you know?) 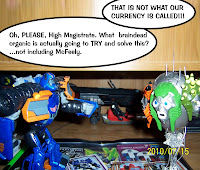 Well, as it turns out it took 15 days for General Tekno to blow through this thing.  Congratulations to our winner!  He even beat out Chris McFeely, who had decided not to enter the contest but was a few clues shy anyway.  The very last clue to be solved was 118 across, Syli.  That's a real currency, btw, not a Transformers reference.  In honor of that, General Tekno made up this cartoon:

(Oh, and apologies for some late night crossword bungling, but 118 down doesn't exist - it should have be 119 down, which is the blank square immediately to the right of 118.  Unfortunately, there already IS a 119 as an across square, so that makes it, um, 118.5.  Sorry, guys!)

Oh, and if you have no intention of solving it yourself, the answers are here.  General Tekno (and, to a lesser extent McFeely) proved that it can be done!  Congrats, guys.  I'll be getting in touch with you about your prizes. 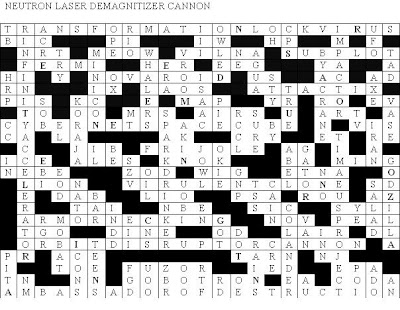 PS: do ya get the word jumble? I thought it was a newspaperishly bad little clue. "Neutron laser demagnetizer cannon," weapon of choice of Action Master partner Screech, who is oddly described as an eagle scout.
Posted by Jimtron at 7:11 PM

For the record, I'd like to thank Jim and Bill for the insanely difficult crossword. Decided I was gonna do this thing, got most of it done, then once I reached an impasse dropped it for a bit and came back to it.

Thanks to Chris McFeely for helping me hash through the last few missing letters in the crossword, and to the people in Skype convos who had to put up with my occasional venting about this crossword and helping me out with a clue or two. You know who you are! :)

I just want to know what the prize was that I passed on in favor of keeping my brain cells from mutinying.