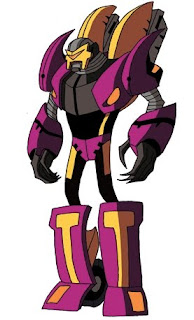 (buy it now!) would not have been possible in its current form without the help of a host of very talented individuals.  One of them, Javier Reyes, also worked with us on the first Almanac to make sure that we had as many of our models colored in as possible.  You see, the originals for many of the models, especially backs of models that were only used in one episode, were sometimes left as black & white line art.  That worked really well for us in the Ark series, but for the most part that wasn't jiving with the aesthetics we wanted for the Almanacs.

That's where Javier came in.  He tireless colored quite a few of our models, and did a bang-up job of it too.  In this new book, he did even more for us, designing several additional characters and a few props.

Now, Mr. Reyes has posted up some of his work over on his deviant art page.  Go on over and see some of what he did, then drop him a note to let him know what you think.  He's got a page of his new designs, and a page of his coloring work.


By the way, Bill and I will be heading on over to SDCC tomorrow morning.  If you see a red-faced ginger in an Iron Maiden tee shirt, that's probably him.  We'll see if we can set up a time to sign some of your books over at the IDW booth.
Posted by Jimtron at 10:18 AM