The Ark Addendum - Attack of the Autobots (part 1) 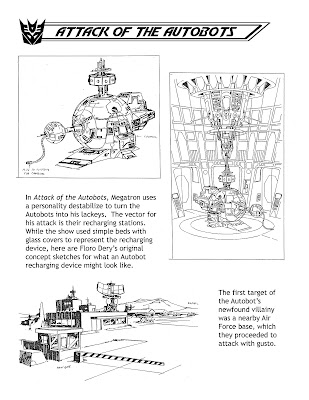 After a break of nearly a month for all of the excitement of BotCon 2010, The AllSpark Almanac II, etc, it's time to return to an old standby feature of this blog.  That's right, it's another edition of The Ark Addendum. This week we look at part one of the background models of Attack of the Autobots.

This episode featured one of the sillier premises of the old Sunbow 'toon.  Megatron slips a personality destabilizer device into the Autobots' recharging chambers.  The Autobots then wake up evil, and willing to obey Megatron's orders.  It's kind of a waste of a silly but fun idea; I much prefer more modern interpretations like Dark Designs or Shattered Glass, which show just how evil a turned Autobot can be.

One thing to note is that the original Floro Dery concept artwork, shown here, is much more exotic than the simple beds with class coverings we ultimately got.  I love how alien everything that springs from his pen looks.
Posted by Jimtron at 10:11 AM

With design, one thing an artist will do/try (and some do subconsciously), is establish a kind of balance/dynamic with the shape. I think (and this is an assumption) his background in math gives him a greater appreciation for 'the rules' of art, that his style is almost procedural. That might sound like an insult but it's not meant as one- even something like this concept sketch, there are patterns inherit to it. You can't really learn that easily, it's something you'd have to work at to do well.

Incidentally, Congratulations on the Allspark Almanac! I love these kinds of books & it doesn't hurt that it's of one of my favorite franchises. I hope you continue to publish them in the future, nice work.