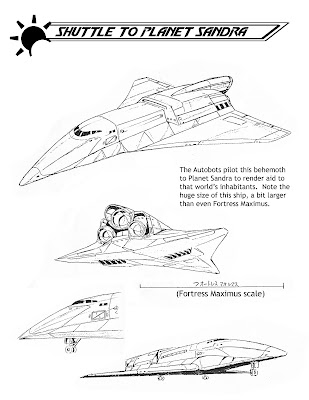 About a year ago, I posted an Ark Addendum for the inhabitants of Planet Sandra, from the SOS from Planet Sandra episode of the Takara Headmasters series.  Today I figured I'd finish off that episode with some models of the shuttle that the Autobots pilot to that world.  Rather than reuse the existing Autobot shuttle models, as they had done in earlier episodes like Approach of the Demon Meteorite, they got a brand new one.  It's massive; according to notes on the model, it's even larger than Fortress Maximus!

The Autobots pilot this behemoth to Planet Sandra to render aid to that world’s inhabitants.  Note the huge size of this ship, a bit larger than Fortress Maximus.


Oh, by the way, Bill Forster has updated his Deviant Art page with some of the original art  for the AllSpark Almanac II.  You can get a closer look at guys like Longrack Major from the Omega Sentinel page, Astrotrain from the Great War board game, and  Sky Lynx from the Maccadam's menu, plus plenty more.  What are you waiting for?
Posted by Jimtron at 12:25 AM

No it is smaller than Fortress Maximus because the shuttle was parked on the left side of For Max's ship mode.