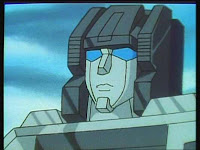 Scattershot: So it was a Decepticon trick!
Nosecone: They can't do that. It's just some natural phenomenon.
Cyclonus: Fools! Something natural? Have your brains also been warped, Autobots?
Scattershot: What? Are you saying you guys did that?
Cyclonus: Oh, sorry. Maybe we should see each other more!


This episode falls in line with "The Autobot Cassette Operation" in that it stand-alone and features a terrible Decepticon weapon meant to strike at the Autobots and/or Cybertron. The lingering plot thread from the previous episode concerning bases where they Decepticons are building something large and mysterious is not referenced, left for a later follow-up.

The story opens with the Aerialbots on a research mission in deep space, piloting the same type of craft as was seen flown by the Autobots escaping Earth in "Transformers: The Movie". The Aerialbots soon encounter a strange meteorite headed towards them and in the process of avoiding it, both they and their ship appear to twist wildly out of shape. Ultra Magnus and Jazz have been monitoring and both inform HQ on Athenia and dispatch the Technobots to rescue the Aerialbots. Meanwhile, we see Galvatron on Chaar, gloating over the success of their science. He plans to send the meteorite to Athenia, to destroy the Autobot HQ located there, and also sends Decepticons to intercept the Technobots.

As Scattershot and Nosecone ruminate on whether or not the meteorite could be naturally occurring, they are attached by Cyclonus and the Terrorcons. Rodimus dispatches Fortress to intercept the meteorite, but his laser blasts are deflected by the strange space body, warping around them in the same fashion as the Aerialbots and their ship were twisted.

Galvatron and the Decepticon Headmasters then arrive on Earth and trash the Throttlebots. The action sequences feature some nicely fluid animation in depicting the combiners in conflict and hectic firefights. We learn here that Galvatron has called the meteorite Metamorphosis, just as Fortress shows up, having decided to follow-up his investigation on Earth. As the Headmasters join the battle, we see a ship escaping Earth, which oddly enough is the same type that Bumblebee and Spike pilot in "Transformers: The Movie". Aboard this ship are the Throttlebots, who state that they faked a defeat in order to sneak away and track down the Metamorphosis meteorite.

Despite a warning from Rodimus to steer clear, the Throttlebots are of course "deformed" by Metamorphosis, the Autobots discover it was created by the Decepticons and that perhaps only an organic life form can approach and disable this dangerous threat. Spike is still wounded from an earlier episode (I think it might have been the series opener?), but insists that he can do this. However, Daniel volunteers for the mission.

Daniel is suited up not in an Exo-suit (in the subtitles it's been mistranslated as an "Excel" suit!), which could still be affected by the meteorite's gravity rays, but instead in an old-style type of space suit. Wheelie needles Daniel incessantly, as usual. Fortress is soon recalled from the battle still raging on Earth in order to ferry Daniel to Metamorphosis. As they approach the dangerous meteorite, Chromedome and his team keep the Decepticons at bay.

Back Battleship Maximus, Daniel proceeds to have a full-on meltdown in front of Fortress, by crying, screaming and banging on the floor in frustration at being scared. OK, so I admit that this would be a valid emotional outburst from any kid faced with a dangerous space walk towards a demon meteorite, but the animators turn Daniel into a mewling 2-year old who is only consoled by Fortress making funny faces. I don't know of any 10 year old (Daniel's about 10, correct) with an IQ above a carrot who would be placated by this, but I gotta chalk this up to a certain anime sensibility. It seems there is often rampant infantilization inherent in much of their anime, where characters exhibit behavior far younger than what their actual age is supposed to be. Either way, it's just plain grating here.

Daniel finds his courage and proceeds with the mission, taking a big leap into space towards Metamorphosis. He finds a way inside the artificial meteorite, disables the sensors which warps metal and then blows up the whole thing, proving he is becoming a man just like his father, Spike.

In spite of the temper tantrum by Daniel, this episode has good pacing and action, plus a threat which could cause great amounts of damage in a disturbing fashion, by warping metal. This certainly would result in great pain and anguish for any Transformer who falls into its path! Unfortunately, we do not find out if the Throttlebots and Aerialbots are found and returned to normal after being mangled by Metamorphosis. Highlights include seeing Computron versus Abominus, cameos of Magnus, Jazz, Spike and Carly, ships from the animated movie and Rodimus effectively commanding all his troops from Athenia.

Next time out, Zarak finally returns…
Posted by Brian at 3:24 PM

I love that this episode has such nice continuity with prop designs - ships from the movie, and the same space suit as used by Jessica Morgan and Gregory Swofford in The Return of Optimus Prime.

Good catch on that space suit! That completely escaped me, but yep, I give them kudos for surprisingly including it.