Regrettably, the current Transformers: Universe toy line is drawing to a close, with no new toys on the horizon and only a handful of redeco toys yet to be released. As this is is the 25th anniversary of the Transformers brand, Hasbro has stated that they wish to pay tribute to all the different toy lines throughout the years. (Despite this, it seems there will be no homages to Machine Wars or Animorphs, but I digress.) In any event, the obvious character to represent Transformers: Armada was Hot Shot. He was the natural choice; Hot Shot was Optimus Prime's star pupil, being groomed for command and swinging around the powerful Star Saber sword like an Autobot version of Luke Skywalker. I'm not sure we needed an updated version of a character so recently added to the Transformers mythos, though—particularly when the new toy lacks so much of the charm and enjoyability of the original. 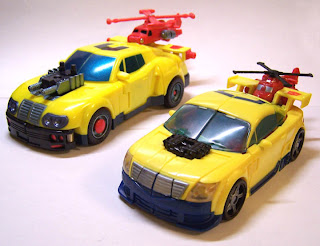 Several of the Armada toys were fantasy designs that weren't intended to represent real-life vehicles. The original Hot Shot toy from 2002 is approximately the shape and profile of an Audi TT Roadster, with numerous concessions made for the sake of the toy's gimmicks (and to sidestep licensing fees, since Hasbro wouldn't enter into regular licensing agreements with automobile manufacturers until the advent of the Alternators line in 2003). The new Hot Shot is much more streamlined, resembling the Audi TT more closely (despite still being an unlicensed toy design), with an exposed engine that's nicely understated this time and a swept back, more aerodynamic spoiler. The new toy has translucent front and rear windows, clear plastic headlights, and silver hubcaps that are far more normal-looking than the bright red ones on the first toy. He measures at only four and a half inches in length, though—the original toy was a full inch longer. 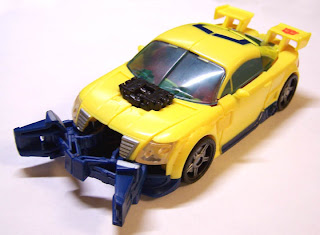 Unfortunately, the new toy has very little in the way of value-added gimmicks. The original Hot Shot was designed to interact with his Mini-Con partner, Jolt, which plugged securely into the back of his car mode; folding the helicopter blades down provided Hot Shot with a propeller-driven flight mode. Also, plugging Hot Shot's engine block in place—with or without the Mini-Con attached to it—activated Hot Shot's spring-loaded driving claws, which popped out of his front spoiler. The new version of Hot Shot actually does have the driving claws, though they're not spring-loaded and not mentioned in the instructions. They actually look like claws, too, complete with articulated pincers (the ones on the old toy looked more like chainsaws). The new Hot Shot also interacts with a Mini-Con partner; the updated edition of Jolt is designed to rest rather loosely inside the rather unfortunate gap that looks to have been carved out of Hot Shot's rear windshield and spoiler. The rotor blades won't fold down in this position, though (the new Jolt has a completely different design and transformation). Hot Shot does have a peg on his trunk that's also designed to accommodate Jolt, but it's probably not meant to be used in this mode, since you have to mount the helicopter either sideways or upside-down, and it looks completely ridiculous (if you're going to mount an tiny little helicopter to the back of your car, it really does need to be facing forwards).
Hot Shot's updated transformation is frustrating and needlessly complex. Transformers: Armada wasn't just a toy line; it was also a design philosophy. Hasbro had just finished selling Robots in Disguise, a Japanese-engineered toy line filled with tricky robot designs that simply weren't appropriate for small children. They needed toys that were easier for their target audience to figure out, which is why so many of the Armada toys were designed with fewer articulated parts. The old Hot Shot was one of the simplest and most intuitive toys in the Armada line—flip the doors open, twist the hood, and swing out the windshield and Hot Shot was ready for battle in seconds. The new toy, by contrast, just seems overly sophisticated for its own sake. It's got about 44 moving parts, about twice as many as the original toy, and the transformation essentially consists of turning the entire car mode inside-out. You can tell some effort was made to minimize the kibble effect, like the clever way the windshield halves slide into his legs, but the toy has so many snap-on parts that it's almost impossible to transform him without a roof panel or a leg accidentally popping off. Also, getting him back into car mode is a challenge in and of itself, with lots of panels that you have to massage into place to get them to fit just right—a design element that turned many fans off about the highly complex Alternators toys. 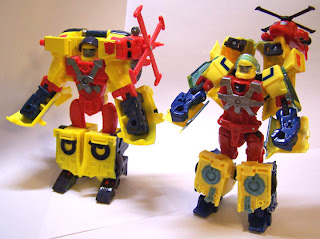 As a robot, Hot Shot ends up at a little over five inches in height, about the same as the original toy. All the essential elements are there—he still looks like a robotic race car driver, with a head shaped like a racing helmet and chest components that strongly resemble a five-point harness. One of the most obvious differences between the two designs is that the new Hot Shot is built to much more humanoid proportions, lacking the enormous ungainly backpack of the original. He's fully articulated at the head and shoulders this time, with about 25 useful working joints in all. This time, his rear fenders are independently positionable instead of being permanently mounted to his back (and head), but the huge spoiler chunks on his shoulders still tend to interfere with them. (They're mounted on swiveling pegs so there are several options on how to arrange them, but they're still awkward and get in the way in the same way that Transmetal Cybershark/Sky-Byte's shoulder pads did.) He comes equipped with a translucent blue visor that flips down, just like the original toy.
Unfortunately, the new Hot Shot just doesn't have the play value of the original version. The old toy was designed with a number of fun gimmicks, like a missile launcher formed from his rear axle that could flip up, rotate 90 degrees, and fire a projectile (actually the aforementioned red-colored hubcap) when you plugged his Mini-Con in place. His engine block also doubled as either a shield he wore on his chest or a dual-barreled weapon that he could wear on his shoulder. The new Hot Shot has no spring-loaded features, completely lacking a Mini-Con activated gimmick—and worse yet, he has no weapons of any kind! (It seems that somebody forgot to consider Hot Shot's compatibility with other toys, which was also a staple of the Armada line. The new Hot Shot has holes in his fists, but they're too small to hold the Star Saber sword. There are also undocumented peg holes on either side of his forearms, but again, they won't work with other Armada accessories. Furthermore, the toy's pegs aren't the right shape to accommodate any other Mini-Cons except for the one that came in the package with him—I tried plugging in the original Jolt and it wouldn't fit.) 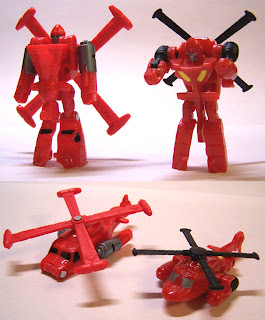 The new Jolt isn't all that dissimilar to the original version (he still looks a lot like G1 Powerglide in robot mode), although the updated Mini-Con is smaller, with tiny little rotor blades that seem surprisingly fragile. This time, the legs swing down from underneath the fuselage, with the entire front end of the helicopter ending up on Jolt's back. He lacks the articulated knees of the original version, but this time his elbows can bend, so I suppose it's a trade-off. His lower arms just snap in place, though, so they pop off too easily—he's not nearly as well-constructed as the Nightstick accessory for the new version of Cyclonus. One major design flaw of this tiny toy is that it is, quite simply, incapable of standing upright. Due to the weight of his backpack, you have to lean him way over to get him to balance. (The new Jolt lacks the "M" symbol that adored all of the Mini-Cons from the original toy line—with the exception of those who were heralds of Unicron.)
There's also the matter of the profile on the back of Hot Shot's packaging, which pays lip service to his role as commander-in-training under Optimus Prime's tutelage, but also describes him as erratic and annoying and impossible to reason with—traits which never applied to Hot Shot as he was depicted. It's almost as if the biography was written by a fanboy who simply isn't a fan of Armada—a far cry from the unbiased profiles we've gotten in nearly every other instance. More bothersome than that, though, is that his profile also mentions that he's "obsessed with something called JaAm, which most Autobots think is some obscure fuel source." For those who don't know, the infamous "JaAm" parody was put together by Matt Marshall, a satire of the badly-written trilingual adventures of Hot Shot tangling with Armada Cyclonus. As originally depicted in the pack-in mini-comics that came with the first wave of toys, Hot Shot attempts to secure a canister filled with a green glowing liquid substance. In the parody version, Hot Shot is depicted as a mental case who spouts nonsensical drivel like "WhY mY sHoULdErs hUrT?" and "I LiK JaAm!" The original parody was cute, poking fun at the original toy's awkward robot design, but does a reference to it really belong on the official Hasbro toy packaging? Hot Shot never encountered anything called "JaAm" in any of the official cartoon episodes or comic books, so why turn the character's entire biography into a joke? Even the toy itself has the word "JAAM" stamped on its license plate. This sort of thing has been popping up more and more frequently lately and I've begun to feel as though Hasbro is about ready to break down the fourth wall with a wrecking ball.
I wouldn't say this toy is a total failure in the same way that the new Dinobot and Cheetor were, but it still has some glaring problems. It's certainly better proportioned this time, and I can't argue that the toy would look great on a display shelf, but somehow it lacks the qualities that made the original Hot Shot toy appealing. The first toy may have had his problems, like a helmet permanently stuck to his backpack and arms that only moved in one direction like a Duocon, but this is simply what Hot Shot was. He was meant to be a simple, brightly-colored toy with kid appeal. Coming up with a fragile, over-engineered version, seemingly targeted towards collectors, is like coming up with a cold-cast porcelain statue of Elmo from Sesame Street. If it's meant for kids, let it be designed for kids to play with! There's also the fact that while original Transformers characters like Hound or Ratchet have been around for 25 years now, Hot Shot is only seven years old. Today's toy technology really hasn't significantly improved in that period of time; surely there were other characters much more deserving of an update. At any rate, when you compare the new version of the character to the old, you're paying more money for a smaller toy with fewer features. In short, I don't recommend Hot Shot at all.
Zob
Posted by Zobovor at 10:35 PM

It's a real shame that he can't wield the Star Saber. To me, the real genius of the Armada line was all the Mini-cons.

Coming up with a fragile, over-engineered version, seemingly targeted towards collectors, is like coming up with a cold-cast porcelain statue of Elmo from Sesame Street.

And yet, the concept of a "Shatter Me Elmo" toy is strangely appealing....