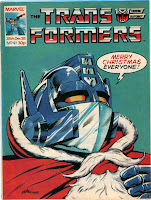 After a two-week absence for which I do not have a good excuse, its finally time to review the first seasonal offering from the British Transformers comic: “Christmas Breaker!”

The script was by - lets play this game again - guess who the script was by... ha, you’re wrong, it wasn’t Simon Furman, it was James Hill, who would go on to write a couple of small but significant Transformers stories, most notably the text story “State Games” in the 1987 annual. “Christmas Breaker!” was pencilled by Will Simpson, lettered by Richard Starkings, coloured by Gina Hart and edited by Ian Rimmer. The cover was by Mike Collins.

And a fun cover it is too. Its a big portrait of Optimus Prime, except he is wearing a red fur-lined cloak and is in the process of removing a big (really, really big, I suppose) fake beard and whiskers. “Merry Christmas everyone!” he exclaims jovially, and although I’m not usually a big fan of text on covers I forgive this one for its appropriateness and message of good cheer. It’s a good image of Prime. His faceplate is now resolutely silver and the metal of his head and face is buffed to a well-realised sheen. A simple cover, then, but effective for the season.

The story opens with a splash page of the Portland Chronicle newspaper being read by a woman with circuitry covering her hands. We only see her hands, and hear her exclamation: “Damn robots!” but it cannot be anyone but Circuit Breaker (the title is also a clue). The newspaper is reporting the stories of the workers from Blackrock’s aerospace plant that was freed from The Decepticons in “Prime Time!”, a US story that ran in the UK just before this issue. Circuit Breaker fumes about the story in a nicely done page that provides the mandatory background exposition, but shows it to us through the lens of her hatred of the Transformers and thus gives us an interestingly designed version of Soundwave with a hideous serrated mouth and hands made of grasping drill-bits. We are then treated to yet more exposition, retelling Circuit Breaker’s origin, which is less inventive in its arbitrariness, but equally necessary. “Do you hear me robots?!” Circuit Breaker rages at no-one in particular, “I was crippled by your senseless war... for that I’m going to KILL YOU ALL!”

Meanwhile, in The Ark, the Autobots, supervised by Buster, have built an enormous metal Christmas tree. Optimus Prime is in his Santa getup from the cover and it is a scene of good seasonal cheer, except for Prowl, who does not understand why they are spending their time in this way when they are at war. Bluestreak points out that they are indebted to Buster and therefore owe him some indulgences, and Prowl is forced to agree. Jazz asks Buster what the tree does and the human tells him that it doesn’t do anything but its a symbol of charity. Jazz says, in a rather specious piece of reasoning, that he’ll never understand humans, because they talk of charity yet Circuit Breaker is only interested in destruction. Obviously this is to keep Circuit Breaker tied to the Autobot part of the plot, and it was a good idea to use Jazz, because he was previously injured by her, but the idea of Jazz judging all humans by the example of one seems highly unlikely and contradictory to his nature. It isn’t, after all, as though all Transformers have the same goal and personality, even all Autobots or all Decepticons. So either Jazz is stupid, a racist, or he was more shaken up by Circuit Breaker’s attack than we knew. Jazz then tells Buster (and us), in the third page of exposition, about his battle with Circuit Breaker. As he finishes relating the story of his near-death experience, he is cut-off, unintentionally hilariously, by Buster, who remembers he promised to deliver Christmas presents. Jazz does not seem worried by Buster’s complete disregard for his emotional pain and offers to drive him. Buster tells him they have to go to a small town, just outside of Portland, cal 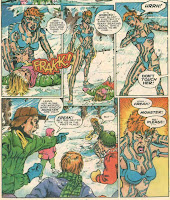 We are shown that St Petersburg is where Circuit Breaker is! She silently watches children play in the snow around a frozen lake until the ice cracks and a little girl falls in! Immediately she sheds her disguising coat and flies to her aid. She blasts the ice and hauls the child out of the water but her heart has stopped! Utilising a sound effect very familiar to fans of Battlestar Galactica, she restarts the girls heart with a bolt of electricity. The girl is soaking wet and lying on a frozen pond, but I guess we’ll gloss over that.

Despite her heroic rescue of the child, the other people around the pond don’t seem to realise that Circuit Breaker is no threat. They pelt her with debris and call her “freak” and “monster” in a scene that manages to make you feel for the plight of Josie Beller. Taunted from all sides by her own kind she hallucinates a sort of cross-between Shockwave and Soundwave lurking in the trees and blows it away before taking to the air.
Meanwhile, Jazz is driving along with Buster but doesn’t realise that the road has become treacherous until its too late. He wipes out spectacularly and transforms as Buster is flung clear. Circuit Breaker sees Jazz kneeling over the unconscious Buster and leaps to predictable conclusions, swooping in to attack. She kicks Jazz around for a bit, while he professes not to want to hurt her, but luckily Buster wakes in the nick of time and manages to stall Circuit Breaker by telling her the truth she doesn’t want to accept - that not all robots are destructive. Ultimately, it strikes midnight, Christmas Day begins, and Circuit Breaker is persuaded to stay her hand. She grants Jazz a second reprieve, but warns that there will not be a third, which rather undermines her wishing Buster a merry Christmas. Jazz thanks Buster for saving him, but Buster tells him that he was actually saved by Christmas, which Jazz concludes must be pretty special.

I quite enjoyed “Christmas Breaker!” That is not to say that its very good, it isn’t, but there are good things in it. I am quite the fan of Circuit Breaker and I enjoyed the fleshing out (oh-ho!) of her character in this issue. It doesn’t really tell us anything new. She hates robots, for a pretty understandable reason, and that hatred is driving her a little insane. Despite often being on the wrong side she is fundamentally a very sympathetic character and it is actually quite painful to see her own kind turn on her for being different, even after saving a child’s life. Yes, its a rather clumsy and obvious parallel to her own treatment of the Autobots, and no, she doesn’t appear to get the message, but its still quite an affecting sequence.

The rest of the issue is less successful. I like the idea of the Autobots trying to understand Christmas, it seems perfectly in character for them to do so, and Prowl’s humbug attitude is also very fitting (On a trivial note, Transformers wearing clothes are always funny: http://tfwiki.net/wiki/Transformer_clothing). Jazz vs. Circuit Breaker, round two, is not an especially exciting battle and can only win one way. We know that Jazz isn’t going to be wrecked in the Christmas story, and Circuit Breaker is certainly not going to ever be killed, or even harmed, by an Autobot, so the conclusion is inevitable. That and the co-incidence that Circuit Breaker happens to be passing when Jazz has a rare crash strains credibility almost to breaking point. The Christmas message is mandatory but still comes across as heavy-handed. If you can think of a story where Christmas saving the day doesn’t come across as heavy-handed then you’re a better man than me, so I can’t really lambast the triteness of this ending as much as it deserves. Three of twelve pages being devoted to exposition of previous issues is far too many, however.

Simpson’s art is pretty good. He is particularly comfortable drawing humans, and luckily this issue has plenty of them. His Circuit Breaker is, dare I say it, much more n 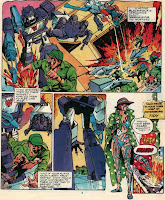 atural looking and attractive than she ever appeared in the US comic, although Gina Hart has inexplicably recoloured her hair as red. Simpson has also redesigned her costume to be even more brief than it was previously (go check, I’ll wait) - it doesn‘t even completely cover the soles of her feet, which seems excessive. One cannot help but feel for her in this snow-bound issue, although it would appear that her suit keeps her warm . His Transformers are not quite so impressive, but they get the job done. Jazz is clearly based on the animation model and his crash is quite well done, although the rain streaking down is a little heavy-handed and obscures more than it adds atmosphere. I think my favourite image is actually the nightmarish Soundwave from Circuit Breaker’s flashback. Hart’s colouring continues to be good, and, in truth, I’m running out of things to say about it. She doesn’t usually make mistakes (Circuit Breaker could easily have dyed her hair) and everything has a painted texture to it, which really sets the UK book apart, to my mind.

“Christmas Breaker!” is not a good story, and by no means an essential one, but its only twelve pages long and does provide a little extra insight into Josie Beller’s character which is no bad thing. Plus, its a Christmas story in a comic designed for children (Circuit Breaker’s costume apparently aside...) - so it feels like missing the point to criticise it too harshly.

"Christmas Breaker!" was reprinted in Collected Comics #11, also referred to as the 1988 Winter Special.
Posted by Bishbot at 12:44 PM

I'll be accused of being a continuity cop for this, but oh, well...

I'm pretty sure that Circuit Breaker has never met or seen Soundwave at this point. Why she should have nightmares of HIM is a bit odd....

Well she had the newspaper, and watched the news, maybe she'd seen him somewhere like that and that was why she doesn't get his appearance totally right?