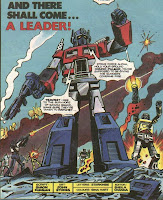 The second comic story in the 1986 annual was a “tale of Cybertron” called “And There Shall Come a Leader!” It was written by...go on, I bet you can’t guess... ok, fine, yes, Simon Furman, pencilled by John Stokes, Coloured by Gina Hart, lettered by Richard Starkings and edited by Sheila Cranna.

We’re in the distant past with this one, long before the fateful crash on Earth, but the Cybertronian civil war has still been raging a while. We are told by the narrator that “the great city states of the Autobots are being overrun.” and the Decepticons are about to stage an attack on the Autobots’ capital city - Iacon. The Autobot council meets, but things seem hopeless. Emirate Xaaron argues that the Autobots’ prosecution of the war has been hampered by the council’s leadership, they need one leader, “an individual, a warrior!” and Xaaron has someone in mind, a natural leader, he says - Optimus Prime.

On the battlefield itself, Prime is already in charge of an unspecified number of Autobots, giving orders left and right. He fumes about the inaction of the council while awaiting the arrival of Bluestreak and Fusion with some weapons called “shatter-bombs”.

y come under attack by Decepticon jets. Fusion turns to fight, targeting the lead jet with a display straight out of Star Wars and blowing it apart. Unfortunately the crashing jet rips a chunk out of the expressway. Bluestreak makes the jump while Fusion covers him. Fusion (who had “red-shirt” written all over him, really) gets blown to pieces by the remaining jets as Bluestreak makes his escape.

Meanwhile, Optimus Prime receives a report, anxious to return to the front line. He takes a call from Xaaron who informs him that he is, effective immediately, now in control of all Autobot forces. Prime is pleased: “At last: now I can strike positively against the advancing Decepticons.”

While the Autobots get the shatter-bombs from Bluestreak, the menacing figure of Megatron towers over the battlefront. He gloats about his coming victory and then asks Soundwave (who looks a lot like Mirage for some reason) for a report. Soundwave tells him that the Autobots have fallen back and Megatron determines that it is now time to attack. The Decepticons advance, only to be halted by the resolute figure of Optimus Prime, backed up by all the remaining Autobots.

The battle is joined on a high and precarious expressway, and, despite the change in leadership, the Autobots appear to be in trouble. However, all is not as it seems. Beneath the bridge, Gears, (who bears

a facial resemblance to the bizarrely off-model Sideswipe from “The Enemy Within!”) is supervising the planting of Bluestreak’s shatter-bombs. It turns out that this was Prime’s plan all along, without council backing. While the council has now given him the power, he would have done it anyway!

Prime and Megatron duel atop the bridge but Prime is on the back foot. Prime takes a fusion cannon shot to the chest and falls as the Autobots retreat. Megatron prepares for his triumph just as the entire expressway explodes beneath him! The Decepticon forces are buried beneath tons of rubble as Windcharger manages to pull the wou

nded Prime out of the way with his magnetic powers. Unfortunately it proves too much to hope that Megatron was destroyed in the blast. He clambers from the wreckage and swears revenge on Optimus Prime - the Autobot leader has won a battle, but the war goes on.

This story is a marked improvement over “A Plague of Insecticons”. For a start, it fits into continuity with barely a narrowing of the eyes. Later comics will retcon in the idea that Prime and Megatron knew each other before the war and this would seem contradictory to that, but they don’t actually exchange many words in this story, so it’s not really a big problem. Furman is clearly interested in the Transformers as an alien race and seems to relish even this small opportunity to get away from Earth for a bit. It also allows him the freedom to turn up the violence a little, demonstrating the desperation of all-out warfare by killing off a few generic Autobots and, presumably, in the bridge collapse, a whole legion of Decepticons - Megatron excepted. Because of the limited character selection on Earth, and the continuity with the US comic, Furman has had to be restrained in the harm he can do to characters, but in this flashback story, he can do what he likes.

The story itself, comprising of only ten pages, is nothing of much weight. Optimus Prime is already the great leader we know and love before it begins. His transition to supreme commander of the Autobots is not really a character arc. This is not strictly an “origin story” per se, all the pieces are already in place, but it is a good opportunity to see Cybertron riven by civil war - something we haven’t seen since the very first issue of either the US or UK book, no matter how you slice it. It is also, of course, the introduction of Emirate Xaaron and the Autobot council of elders, who will continue to play important roles in Furman’s upcoming stories.

In the truncated story-telling there are, naturally, missed opportunities. The first meeting between Optimus Prime and Megatron, in particular, should have been a more momentous occasion than the way it is presented here, but we do have the coda of Megatron swearing revenge so at least there is left the feeling that their next encounter will be much more personal. I would have liked to explore Prime’s feelings on becoming leader rather more thoroughly, but I did very much enjoy the twist that he had already planned to destroy the bridge, even without the go-ahead of the council - Optimus Prime is a robot of action, like all our favourite heroes.

Trivial side-note: just how much does Furman love Windcharger’s magnetic powers in these early stories?

The art is also a big improvement. John Stokes previously pencilled “Decepticon Dam-Busters!” which had some of my favourite art so far. I really like his rendering of Cybetron’s landscape. I can’t get enough of his twisting metal roadways and soaring spires. A panel of Megatron gloating over a burning Iacon is particularly arresting. The way Cybertron is depicted varies a fair bit throughout th 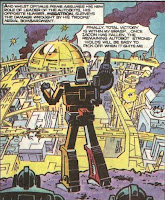 e comic’s run and this version is very close to the Sunbow cartoon, which is my personal favourite. Other highlights include the fact that Stokes gets to be the artist who designed Emirate Xaaron, who will be drawn in much the same way by many other artists in the future, and he does a fairly good job with Cybertronian redesigns. It is a shame that Prime and Megatron remain unchanged in robot mode, and that neither transform, but Bluestreak is unmistakably an alien car, and the jets that chase him and Fusion are definitely not Earth planes. Fusion himself appears to the sort of generic battle-machine that Prime was in issue one. The pencilling, then, is mostly deft and effective, and I much prefer it to Mike Collins’ effort in the same issue, but points must be taken off for drawing Mirage instead of Soundwave. I mean, how does that happen?

Gina Hart can colour Transformers in her sleep, but I wish she would start giving Prime a grey faceplate and colour Megatron more like his cartoon version. The colour similarities between him and Xaaron in his story are an odd coincidence, and she uses the same colour combination again on a background robot in a battle scene. Still, she continues her excellent job of avoiding block colouring and generally compliments Stokes’ art very effectively.

Overall, I like this early “Tale of Cybertron” a fair bit, and find myself wanting more stories from this period. Definitely read it if you can get hold of it, but that might be tricky, because as far as I know, it was never reprinted.
Posted by Bishbot at 2:53 PM

Hey, interesting. That yellow guy next to Prime on the first page, he also appears as a generic Autobot in Marvel U.S. issue #1. Nice bit of continuity.

It was reprinted in the UK in one of the later Collected Comics.

It's a classic story.

Ah right, cheers, I was going by the TFWiki, which seems to have let me down in this instance :)

I'd recommend the TFarchive section on the marvel comics. A pretty definitive resource. http://tfarchive.com/comics/marvel/

Man I really need to read these...

Before I had any idea how UK continuity worked, I ordered 3 random issues blind from Mile High Comics (named after their prices), and while 2 were just reprints of US stories I already knew well, one was an unnumbered book called "Plague of the Decepticons" in their ad, but "Plague of the Insecticons" on the cover. Is this, perhaps, the copy you have? The only thing in it besides the 2 comic stories, IIRC, is Hound's word scramble page from the coloring book, "The Search for Treasure Under the Sea".

The parallel between Megatron and Xaaron runs deeper than their colors; am I the only one who thinks he was designed to look like essentially a weaker version of Megatron? Not that the parallel means much in context, but even the good Emirate's forehead looks a bit like Megs's crest inverted or something.