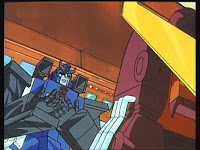 Cyclonus: I have an idea, Galvatron.
Galvatron: What are you waiting for? Tell me!
Cyclonus: We'll let him take Earth's energy,then we'll snatch it from him.
Galvatron: That sounds good.
Scourge: Let me handle it, Lord Galvatron. I'll do it!
Cyclonus: That's unfair. It's my idea.
Scourge: Wait!
Galvatron: Your talk bores me. Do it together if you're so keen.

Here we have an episode intending to highlight Sixshot and the Trainbots and yet is motivated by a plot that catches all characters, Autobots and Decepticons, in a moment of absolute witlessness.

The story opens in space, above Earth, with a shadowy ship approaching, then jumps to Japan, where the Trainbots are taking Daniel and Wheelie on a sight-seeing tour. Oddly, the narration informs us that Japan is the birthplace of the Trainbots and we're not provided any more elaboration on that point. One is left to wonder, is it simply their train bodies that were built in Japan while their sparks are originally from Cybertron, like the Combaticons? Are they perhaps not Transformers born and bred, but instead products of human engineering, meant to assist the Autobots? Since much of this episode occurs in Japan and the actual Trainbots never appeared in the US series or the toys on US shelves, I happen to think it was a shrewd inclusion by the writers to claim ownership of these specific characters, without much thought for how logical it might or might not be in the Transformers universe.

While in Japan, they witness a broadcast by a mysterious figure in shadows who threatens the country if not given all its energy. We soon learn that six countries in total have received this threat, but a different shadowy figure appeared to each of them. The Autobot Headmasters travel to Earth to help and Rodimus decides to investigate each country that is being blackmailed for its energy (Japan, USA, USSR, Canada, France and Britain). Meanwhile on Charr, Cyclonus and Scourge become angered that some mysterious third party is trying to wring energy from Earth and demand that Galvatron intervene. He refuses, so Cyclonus and Scourge decide they will let this shadowy menace take Earth's energy and then in turn steal it from him. Galvatron flippantly says that they can do what they want. Cyclonus and Scourge next ask for help from the Decepticon Headmasters, but are rebuffed and thus travel to Earth on their own.

There are attacks by the mysterious blackmailer in London and New York, causing extensive damage. Metroplex, Chromedome and his team attempt to confront this stranger but are too late each time. Later, the Trainbots return to Autobot HQ along with Daniel where an angry Chromedome insinuates that the Trainbots are not doing their part to protect Earth. There is an argument and stand-off, which Daniel unsuccessfully tries to halt. Instead he is told to be quiet and runs off. Chromedome and the Headmasters soon apologize and during this conversation, Daniel shows them a toy ninja throwing star, which he purchased while in Japan.

Daniel's explanation of ninjas and their tactics of subterfuge force Chromedome to recall a time on Planet Master, before they had built their giant transtector bodies, when they were under assault from a being who could split into six shapes and had similar abilities to the ninjas, as described by Daniel. This "ninja" killed Abel, a friend of Chomedome's, during that assault long ago, Chromedome deduces that whoever is blackmailing those six countries for their energy is the same person and probably the same "ninja" he encountered on Planet Master.

Soon an attack on Japan occurs and the Trainbots beg Rodimus to let them defend their homeland, despite Chromedome's protestations. Rodimus allows this. Galvatron orders Cyclonus and Scourge to take Typticon to Japan and keep the Trainbots out of the way. A battle ensues between these three forces, during which the shadowy threat, no longer in the shadows, simply appeares as Sixshot. Raiden, the combiner form of the Trainbots, is in over his head and so the Headmasters arrive for an assist, disabling Trypticon, routing Cyclonus and Scourge and eventually they Sixshot as well. When Sixshot splits into six forms, Raiden lets them all attack him directly so that the Headmasters have a clear shot to fire and hopefully hit the real Sixshot. They are successful and back on Charr, Cyclonus and Scourge are disciplined by Galvatron for ruining whatever secret plan he and Sixshot had concocted.

As I noted in earlier, I find that this is a weak episode in most every aspect. A sharp-eyed viewer would have immediately recognized each of the six shapes as those belonging to the alt forms of Sixshot, but no one in this episode makes that connection. Up until now in this series, Sixshot has remained on Earth and really only engaged the Autobots in the opening three-parter, where he did introduce himself and his alt forms to Ultra Magnus and his team during the battle so it's a little difficult to accept that even Magnus does not make the connection visually. He stands right next to Rodimus as they watch on the moniters Japan getting attacked by Sixshot, clearly visible, and yet no one identifies until much later, when Chromedome is pretty much in his face. A story such as this should have occurred earlier and perhaps been the actual introduction to Sixshot, as opposed to him being introduced in the series opener.

The most memorable parts of the episode is the confrontation between the Trainbots and the Headmasters, which advances Chromedome's character further, showing him to be arrogant and overconfident, seemingly thinking that no one can do the job better than he of protecting innocents and defeating the enemy. Obviously, he gets the job done, but he certainly ticks off those around him in the process! And then there is the mystery of the Trainbots I alluded to earlier, but unless this was explained in a manga at some point, we're left in the dark as to how Japan and not Cybertron is their place of origin.

Next up is the first of a two-part episode which changes everything in the Takara Transformers universe!
Posted by Brian at 11:15 AM

The trainbots are still my favourite combiner team, and one of the few reasons I like watching Headmasters from time to time. Loved the designs! :)

(I also own a pre-Hasbro complete set of Trainbots, mint in their original Diaclone boxes :D)