“Crisis Of Command!” followed directly on from “Christmas Breaker!” in the UK run and was a three part story running in issues #42, #43 and #44. Unusually the creative team was not consistent over the three issues. Mike Collins scripted Parts 1 and 3, while James Hill scripted part 2. Geoff Senior pencilled Parts 1 and 2, while John Stokes handled part 3. Part 1 was coloured by Steve Whitaker, while Parts 2 and 3 were coloured by Gina Hart. Mercifully, Mike Scott lettered all three issues and Ian Rimmer edited them. 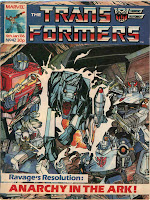 The cover for Part 1 was by Will Simpson and its something of a mixed bag. A very nicely rendered Ravage is front and centre, leaping straight at the viewer, with a cloud of energy and fire behind him - not very stealthy, but an effective attention grabber. The various Autobots stand around him, weapons drawn, in differing states of shock and are somewhat less successful. None of them are exactly on model. Prime is too burly with tiny arms, Prowl’s face is totally wrong, and Hound, lurking at the back, looks suspiciously like Megatron. The scene is coloured well, however, and Ravage is a sufficiently well-drawn highlight. The lettering reads “Ravage’s Resolution: Anarchy in The Ark!”- Resolution, because its the January issue, and its New Years, get it? It’s fairly lame, and the actual titular crisis in the Autobot command structure doesn’t come from Ravage in any case.

The issue opens with the Autobots arguing. Prowl wants Optimus Prime to “release the Creation Matrix” in order to “wipe out” the Decepticons. Jazz is opposed to such drastic tactics and Ratchet appeals to Prime for guidance as the leader sits in his throne-like chair, looking very grave indeed. Prime objects to the use of the Creation Matrix although Prowl’s plan appears to be tactically sound. He wants to use the Matrix to build a new breed of “Ultimate Autobots” who could destroy the Decepticons in a matter of days so Prime would “have [his] peace.” Jazz is disgusted by the idea of creating a race of warriors, and doesn’t think they have the fuel to power them, in any case. As the Autobots talk, we see a panel of Ravage sneaking through one of The Ark’s many corridors. 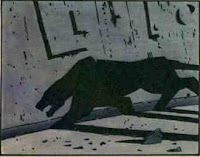 Optimus Prime does not approve of Prowl’s plan, calling it a perversion of the Creation Matrix and wondering, quite reasonably, what sort of collateral damage would happen to the Earth were such a titanic battle to take place. He makes it clear that the discussion is over, but as the Autobots file out of the room, Sideswipe says that Prowl’s plan makes sense, and Hound agrees that Prime is being too pessimistic about the outcome, wondering, most tellingly, if he is fully himself after all he has recently been through. Ravage looks on, unseen, and muses about how interesting this all is.

The next page is all introspection from Prime. He is beginning to feel the weight of his responsibilities as leader and he recalls the various indignities heaped upon him and the Autobots recently - defeat from Shockwave, his head being taken and mind plundered, and finally his body being used to attack his own people. He wonders if he really is fit to command, and how much the other Autobots wonder this too. Ravage observes this - Prime’s words are in thought bubbles, so he presumably does not know the full context, but the Autobot leader’s dejectedness is easy to read from his slumped and defeated posture. Suddenly he crosses from shadow to light and alarms blare throughout the ship!

The Autobots immediately scramble to subdue the intruder but Ravage puts up an impressive display of force, managing to get past a great many Autobots before finally being cornered by Hound, out in the open desert, after Mirage distracts him with the old hologram trick. Ravage is bundled into an energy net (or maybe just a big net) and hauled away, while the Autobots tell Prime that they might disagree over methods, but they still want to stop the Decepticons. Prowl is concerned that Ravage knows that they are considering using the Creation Matrix, but Prime says its not for discussion in the open. Unfortunately, Laserbeak is lurking nearby and hears everything.

Meanwhile, the leaderless Decepticons are also arguing about their plans. Starscream says that Ravage should never have been sent in alone. Soundwave says that Megatron would have done the same thing, but Starscream has no time for Megatron, who is still missing. He suggests that with him in comma

nd, they could simply attack the Autobots, defeat them, and claim the Creation Matrix for themselves. Soundwave rages in reply that Starscream has no sense of strategy and is merely, in a nice turn of phrase, “a missile with a mouth.” He stresses the importance of knowing what the Autobots are planning and if they intend to use the Creation Matrix, pointing out that “there’s not a prison here or on Cybertron that can hold Ravage.” as the Decepticon in question uses his magnetic field powers to escape through the energy bars and slink off...

It is a pretty good first part. Collins has a decent handle on the characters, despite not having written them before. He has drawn a good many of the earlier stories though, which obviously helped. The plot is quite original and comes down to ideologies. Prime has always contained within him the potential to create robotic weapons of mass destruction that could, in theory, end the Autobots’ millennia-old struggle very rapidly. However, he believes strongly against using it. The collateral damage argument is fair enough, but does not provide the full picture, because presumably he could also have employed such a tactic on Cybertron, rather than Earth, and never did. Jazz is as disgusted by the idea as Prime is, and it would appear that the real issue here is the proper use of the Matrix. After all, Prime fights for peace; he openly states that he is not a warrior by choice, and it would appear that the idea of using the Matrix to create a race of dedicated warriors would be a step too far down that path for him. What isn’t explored, but struck me as part of the “against” argument is the fate of the “Ultimate Au

tobots”. What role could they possibly have in the peace that their creation would usher in and, in any case, surely there should be a serious moral objection to creating a race of beings simply to fight your battles for you. The Decepticons do it without a second thought, but the Autobots have to be better than that - they are volunteers, and they all had a choice. The Ultimate Autobots would not. It is interesting to compare this dilemma to the original Sunbow cartoon, where no-one had any objections to this sort of thing at all, and it happened as soon as some more toys came out. However, by contrast, the more recent episodes of “Transformers Animated” seem to suggest that the creation of the Omega Guardians was exactly the sort of thing that Prowl was advocating - and did result in peace in that universe, but at a considerable moral cost, characterised by the deeply caring Ratchet's impotent outrage at the idea.

The actual events of the issue are not as interesting as the moral dilemma at its core. We’ve seen Ravage infiltrate the Ark before and the battle is confused and brief, not managing to be exciting. There are moments of great characterisation though. Prowl says “and you will have your peace.” not including himself in the outcome. This demonstrates that, of all the Autobots, he considers himself to be a soldier first and foremost. He is concerned with winning the war, of course, but it would appear that is more because that is what he does, rather than the loftier goals of Optimus Prime and the more idealistic Autobots.

Prime begins to display his considerable capacity for self-doubt that Simon Furman would later frequently use to great effect and it is nice to see him in something other than the wise leader role. He has been through the wringer in recent stories and it is a very good use of the UK book as a supplement to the US one to explore the effects on his psyche a little further.

The Decepticons do not get left out. Starscream is, as always, about as subtle as a brick to the face, and Soundwave does not appear to take him seriously at all. Interestingly, Soundwave has not taken command, even though he is perfectly able to put Starscream in his place. He continues to carry out what he believes Megatron’s orders would have been and refers to Megatron and Shockwave as leadership material but not himself. Soundwave, probably unique among the Decepticons, has no personal ambition beyond doing his job and serving the cause, making him just the character to be utterly contemptuous of Starscream.

The script itself is a little unsubtle, recalling but not equalling Simon Furman’s uniquely self-aware style, but there is nothing genuinely bad about it, it just does the job, without sparkling, except maybe in Soundwave’s scene with Starscream.

Geoff Senior’s first work on Transformers is competent and fits in well with the style of the preceding issues but doesn’t blow me away as his later work would. He seems mostly concerned with making it lo

ok like the artists before him, which makes sense, but as his Transformers work progressed, Senior’s work becomes a lot more distinctive and dynamic, especially in action scenes. That said, there’s nothing wrong with the art here, and the design of the Ultimate Autobots is particularly well realised. I am also partial to the single, wordless, panel of Ravage's shadow intercut with the Autobots talking, indicating his sinister presence. The fight is confusing, but fairly perfunctory, and everyone is basically on model. These earlier issues, with Gina Hart’s colouring (and her style of colouring, even if it isn’t her) do differ in look considerably from the ones that Senior made his mark on, which is probably another reason why his debut doesn’t excite me as much as I thought it would.

A good issue, certainly much better than the likes of “Christmas Breaker!” or the annual stories and with an interesting moral quandary at its heart. Highly recommended so far. Reviews of Parts 2 and 3 will follow as soon as I can. Next Friday, if not before.
Posted by Bishbot at 12:19 PM

That's one of the things that was never touched upon in the (2007) movie, something that should have been their. The Autobots aren't warriors like the Decepticons. Sure their soldiers, but they've been thrust into the situation more out of self preservation & duty then anything else. It seems Mike Collins grasped that distinction.

I'm not crazy about the style of the cover. However, the shots of the interior art look pretty good, I especially like the foreboding long shadow of Ravage- very cool!

Another good U.K. issue I've missed out on...

I guess i never understood that these "Ultimate Autobots" would be mindless drones. I remember reading this and thinking, "it's so hypocritical that they are saying they would never build stronger, tougher Autobots, and then a few issues later build Special Teams with such excitement!"

I do think that Soundwave made a VERY good Decepticon leader. His tactics caused more Autobot casualities than others (Dinobot Hunt and the Bumblebee peril)