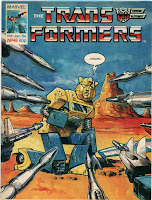 Writing duties for the second part of “Crisis of Command!” passed from Mike Collins to James Hill, who previously scripted “Christmas Breaker!” - a not especially classic story. Geoff senior continued with the art, Gina Hart took back colouring duties from Steve Whitaker, the lettering was still by Mike Scott and Ian Rimmer continued to edit.

The cover is by John Ridgway and it shows a battered looking Bumblebee crouched in the desert, as several Decepticons point their guns at him from off-panel. “Ooops!” he says, and the viewer is forced to agree. It’s a good cover that effectively conveys the fact that Bumblebee will be in jeopardy this issue. Bumblebee is pleasingly on-model, at least facially. His feet are ridiculously small considering his alternate mode and he couldn’t possibly transform, but mechanical fidelity was never a big priority for the Marvel comic and the cover is a good dramatic piece. Bumblebee’s facial expression is particularly effective, demonstrating the wisdom of dispensing with the clunky toy model.

The issue opens with a splash page of Bumblebee, in vehicle mode, blasting through t

he desert. “It’s hopeless...” he says, “I’ve failed!” It turns out that he is looking for Ravage, after his escape last issue. Bee Transforms and, despite his despair, uses his infra-red vision to scan the landscape - actually finding the errant Decepticon!

Upon sighting his quarry, Bumblebee’s mind flashes back to the bit of the story we’ve missed so far. He noticed Ravage’s cell empty by chance and ran to tell Optimus Prime about it. He found Prime discussing tactical options with Prowl, who was advocating an all-out strike against the Decepticons. Prime was reluctant, but when Bumblebee interrupted with the news of the escape he uttered a despairing “Oh no” and asked Prowl what he should do. Prowl advocated sending Hound and Mirage; after all, they caught Ravage once. Bumblebee, however, was dismayed to see Prime so indecisive and elected to pursue Ravage by himself in order to try to prove the value of the “more conciliatory Autobots” rather than the more warlike Prowl and his suggestions to use the Creation Matrix for warfare.

Back in the present, and back in the Ark, Prime himself is wondering whether he is letting Prowl influence him 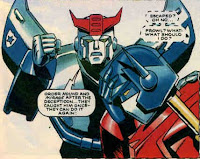 too much. Bumblebee’s absence is noted when it becomes apparent that he never told Hound and Mirage about Ravage’s escape. Prime, noting that Bumblebee could never have tracked Ravage if he did not want him to, realises that the little Autobot is being led into a trap! Prime’s explanation of this is in captions over panels showing Bumblebee following Ravage into a narrow canyon, giving us a nice display of the sort of story-telling that comics excel at. Bumblebee runs headfirst into Soundwave, along with Rumble, Frenzy, Laserbeak, Ravage (of course), Skywarp and Thundercracker. This is a really excellent tableau from Geoff Senior and Soundwave looks like he was born to lead. Bumblebee tries to run, but is stopped by a powerful missile attack from Laserbeak, knocked down, and seemingly, out. Skywarp seems unimpressed by Soundwave’s efficiency, however, noting that the only Autobot to fall into the trap is “the weakest, most insignificant” of them. Bumblebee flails out with a punch, but he is woefully incapable of harming the powerful Decepticon, and Skywarp slams him to the floor once more. As Bumblebee lies there, Soundwave reveals his actual plan - to give Bumblebee’s life in trade for Optimus Prime’s! 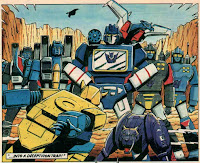 Obviously, Bumblebee, courageous little Autobot that he is, can’t let this happen! He transforms suddenly, somehow knocking the surrounding Decepticons out of the way and starts tearing away into the desert. He gets almost nowhere, however, before the hitherto unseen Starscream lands in front of him and menaces him into stopping.

The other Autobots are worried. Search parties have reported back and say that Bumblebee is nowhere to be found. Just then, Windcharger announces that the Ark’s sensors have picked up an Autobot distress signal, heading for the Ark at speed! The Autobots rush outside to find Laserbeak flying overhead. The birdlike Decepticon drops an elongated object and flies off. Prowl fears it is a bomb, but it soon becomes clear that for Bumblebee, the truth is even worse - it is, in a great dramatic moment, revealed to be his arm, torn off at the shoulder.

This is a fast and exciting issue and, amazingly, does not suffer at all from the change in writer. It is perhaps slightly uncharitable for me to suggest that might be because neither Collins nor Hill have a particularly unique or inspired writing style. They are efficient rather than spectacular, but the plot moves at a brisk pace and all the important beats are given their appropriate focus. The story has, 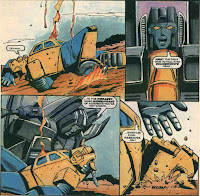 by necessity, shifted towards a more action-packed focus in this part, which is a bit of a shame for the script, because it lacks the arresting ethical dilemma of part one. Although it is still interesting to see that Bumblebee cares so much that the Creation Matrix not be misused that he feels he has to prove himself, and by extension, those Autobots with his point of view, to Prime, in order to stop him from swinging towards Prowl’s ideas. I would have liked a little more exploration of just why Prowl’s ideas are so abhorrent, but that might have been beating a dead horse. It isn’t the most original story - Bumblebee is in trouble - the Decepticons are using hostage tactics in order to try to get at Optimus Prime, but there isn’t really anything wrong with it, everyone acts within what we know of their characters and Prime’s descent into second-guessing himself is very believable. Equally believable is the way he takes charge when he realises Bumblebee is missing - he is still Optimus Prime, after all, a few setbacks or no.

Senior’s art continues to be good - he even manages to make a Volkswagen driving through the desert into an exciting enough subject for a full-page splash. The action is much clearer this time and you really feel for poor old Bumblebee as the Decepticons knock him abou 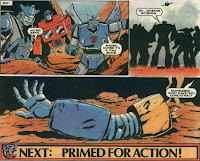 t. The standout panel for me is the aforementioned tableau of Decepticons - Ravage looks especially fierce, but the reveal of Bumblebee’s smoking severed arm comes in a close second. Hart continues to be the gold standard for other colourists of the UK book, giving the robots a convincing metallic sheen and not once forgetting which Seeker jet is which.

There’s not much more to say about this issue, because, by its nature, its Part 2 of a three part story - all set up for the conclusion, but, with only twelve more pages to show Bumblebee’s rescue from the Decepticons, its set to be an exciting finish.
Posted by Bishbot at 4:33 PM

You picked some good panels there! Senior's art is pretty fantastic.

Yeah in hindsight I could probably have praised Senior more than I did - especially as he's one of my very favourite TF artists.

He's a lot more on model then the majority of the art in the US comics. Great stuff.

Best artist in the TF universe! He draws Soundwave like no other. Was a great inspiration for my own art growing up.