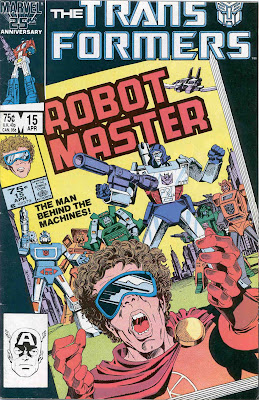 This is a very clever cover. A comic cover on the page of a comic cover, what's not to love? That there is, in fact, a Robot Master comic in the issue is a bonus. It also adequately conveys (or at least teases) the contents of the issue. Trimpe's Robot Master is slightly (slightly) more menacing than Perlin's manages to be, but then really menace wasn't the point, was it?

The book itself is one of the goofier stories. It starts out promisingly enough, with a lovely Perlin splash of Megatron tearing up a coal mine. Bob's words compliment the action well, making Megatron almost a shade sympathetic as he scours the western US for fuel. He rips the wheel off of a bucket-wheel excavator and violently throws it into a construction vehicle, shouting all the while. A dump truck full of coal looks promising, until he finds that they're indigestible. In rage, he hurls the truck away . . . and freezes. It seems that he's just finally ran out of juice.

Not long afterward, Walter Barnett and Triple-I are back. Though somewhat emboldened by having a captive for the first time, III is in panic mode over robot activity. There's a nice bit of continuity, recalling the Shockwave/Megatron fight in issue #6, Soundwave's conquest of the aerospace plant in #7 and the battle at the concert last issue. G.B. Blackrock is brought in as an expert, though quickly hustled out once he starts trying to sell the Autobots as potential allies. III categorically sees all robots as threats, but acknowledges that weapons aren't enough. A plausible cover story to prevent panic is what's needed. This part of the book doesn't really ring true. If the government had a better handle on things I could buy them having the luxury of paranoia, but given the acknowledgment that the robots are out of the military's league, Autobot allies should sound pretty good.

Barnett, with 2 days to come up with something, goes home and takes out his frustration on his son, who's left toys and comics all over the place. However, one of the comic titles, Robot-Master, gives him an idea. Comic in hand, he flies out to New York, to visit a 'famous comic book publishing company' located at 387 park ave south. This was of course Marvel's address at the time. 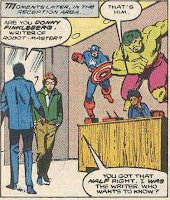 Enter Donny Finkleberg - and exit Donny Finkleberg, for his book just got cancled. Dejected, he sulks out of the office, muttering how given a chance he can sell any story. Not to worry, though, Barnett shows up just in time with a job offer. He wants Donny to come up with a cover story. Unsurprisingly, Donny brings up the idea of a Robot-Master like character. Barnett likes the idea, but needs an actor to sell it, and in the interest of keeping as few people in the loop as possible, offers the job to Donny. Once again, we're asked to swallow a lot. If Barnett had merely asked Donny to spin the Robot-Master idea into something related to Transformers, I could have accepted it. But is Donny that uncreative that he immediately falls back on his prior published work? Also, for what it's worth, presumably Robot-Master was work for hire. Another interesting bit were the statues of Captain America and The Incredible Hulk in the Marvel lobby. Earlier issues of the comic were firmly set in the Marvel Universe. This scene represents a specific signal to the audience that now the Marvel Universe is separate from the Transformers Universe, with Marvel being just an ordinary comic book publisher.

On page 8, we're treated to a few day-in-the-life panels of the Autobots, giving a nice bit of insight into how they're spending their time. Patrol and maintenance, with Hoist instead of Ratchet in the role of medic. Wheeljack (colored like hoist) finds an interesting broadcast - The Robot-Master, claiming dominion over all Transformers and stating that demands will follow. The Autobots are confused, but the public is reassured to have a threat they can understand. Bob uses a nice literary technique here, wherein he has a family in their living room state "I bet the communists are behind this," some people at a store speculate that "I bet the P.L.O. is behind this," but G.B. Blackrock, angrily surmises that "I bet the GOVERNMENT is behind this!"

Blackrock tries not to blow the government's story, but in his disdain he lets some hints slip. III decides that they need to REALLY sell the story, so when news of Megatron's capture leaks to the public they fly Donny out to the coal mine where the immobile Decepticon still resides. The Autobots also set out, to bring Megatron into custody, and Soundwave and some of the cassettes set off to rescue their leader. The Autobots arrive first and try to make contact with the military, who waste little time in opening fire. Prime refuses to retaliate, and so the Autobots take quite a pounding. With the humans distracted, Soundwave fuels Megatron up, and he strikes out in rage against the humans who had held him captive. The Autobots, wounded from their fight with the humans, are in no condition to contain Megatron, so prime orders a retreat.

Most of the humans get away, but Laserbeak grabs Donny and brings him back to Megatron for revenge. Donny, though, makes a proposal. He can help convince everyone that there is no difference between Autobots and Decepticons, making their life easier. Though he finds the whole idea repugnant, Megatron sees the value in this, and allows Donny to live. The second Robot-Master video is considerably more convincing than the first, as Megatron appears to follow Donny's instructions on-camera. Lest he get too comfortable with their arrangement (he is shown to the right, striking a match on Megatron's foot), Megatron reminds him that his value to the Decepticon cause only outweighs Megatron's loathing for him by the slimmest of margins.

So, there you have it. Another mediocre issue. The concept of someone like Robot-Master obfuscating the difference between Autobots and Decepticons may have been necessary to keep the public from gravitating towards the Autobots, but the execution was clumsy. Donny isn't particularly likable or interesting. He's largely self-serving, without a whole lot of redeeming qualities, at least for now. We'll see quite a lot of Donny for the next year or so, and a bit of character growth . . . but only a bit. The artwork is decent, but since most of the focus is on humans, there's not much action. I do love the panel of the Autobots slinking away. The other bit that rang true with me was Barnett with his child, Stevie. Misplaced anger, evaporating into a serendipity; it's a very small, very real moment.

Next month, we're promised, The Plight of the Bumblebee. Given that Bumblebee is one of the best developed Autobots in the comic, it's somewhat promising. I, Robot-Master! is available from IDW Publishing in this anthology: Classic Transformers Volume 1 (Transformers)

"This scene represents a specific signal to the audience that now the Marvel Universe is separate from the Transformers Universe, with Marvel being just an ordinary comic book publisher."

I had this issue when I was a kid. I rather like the cover—but did Nel Yomtov completely forget that Bumblebee is yellow, Hoist is green, Soundwave is purple, et al.?

I hate Megatron's grate-mouth when he's having his little angry tirade.

I don't think Finkleberg is supposed to be a likeable character. He's manipulative and selfish——and he smokes cigarettes, which seems designed to (hopefully) send the message to kids that he makes some bad decisions.

That said, I really don't like Budiansky's "human interest" stories. The most interesting issues of the comic are the ones that focus on the Transformers, not the tired old cliché of how the humans react to the Transformers. The whole angle of humanity mistrusting and not understanding the Autobots also seems like a carbon copy of the mutant hatred from the X-Men comics. You'd think a comic book about gigantic robots from outer space would have more of a sci-fi angle.

Hey, D.M. Yeah, I know that there is a Marvel in Marvel, but even still I think that the point of this scene is (partially) to send a signal. Not so much the address, but the statues (or cut outs) in the background really say to me that Captain America and Hulk are fiction. Note how, after several mentions in the early issues, the Transformers makes no further mention of any Marvel elements for the rest of Budianski's run.

And Zob, I agree that he's SUPPOSED to be unlikable . . . but that doesn't help me to like him. He's not entertainingly unlikable, he's just a shmo.