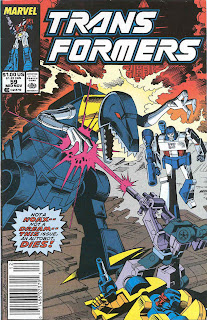 Wow, what a busy couple of weeks.  And with SDCC coming up, it promises to get only busier.  But, while I can take a breather, I figured I'd get back to regular blog programming, and for today that means another comic book review.

Skin Deep is the fifty-ninth issue of the US G1 Marvel Comics run of Transformers. The creative lineup is virtually unchanged from the last issue, which helps give the story a nice continuity.  It was written by Simon Furman, drawn by José Delbo, inked by Dave Hunt, lettered by Jim Massara and colored by Nelson Yomtov.  The cover is by Delbo.

We're treated to a vision of Grimlock battling the Sports Car Patrol outside of Megatron's base.  In the background, Megatron angrily stomps forward.  The coloring and inking give extra weight to what otherwise might be a rather flat cover.  Note the use of yellow explosions, as well as the angry black and red clouds of smoke and dust.  The composition is rather nice, with Grimlock dominating but plenty of motion.  In a riff off of the classic X-Men #42 cover, this issue declares that "Not a HOAX--not a DREAM-- THIS issue, an Autobot DIES!" Clever.

We open right where 58 left off, with Grimlock charging forward and attacking Megatron.  We get some nice metaphysical musings from the big bruiser, about how his own lengthy deactivation has shaken him.  Two panels in and already Grimlock seems deeper.  Megatron knocks him out and threatens Ratchet, but is interrupted by... Bumblebee?  Bumblebee shoots Megatron a few times, then decides that instead of pressing his advantage he'll catch up with Ratchet.  The docbot rather clumsily explains that he never liked the Goldbug design, though Hydrus Four gets mentioned as a place with good surgeons.  I wonder if he was planting seeds, or if he later remembered the line for the Action Master storyline almost a year in the future.  Finally, Jazz joins the fray, asking for help with the Micromasters.  In a blatant attempt to sell toys, Ratchet touts the benefits of having a radio controlled outer shell, before heading out to try to contact Optimus.  Sure, all the toy stuff is a bit clumsy, but at least Furman gets it out of the way in the first five pages so he can concentrate on bigger and better things.  It does seem like they should have kept pounding on Megatron while he was off balance, though, rather than chatting it up. 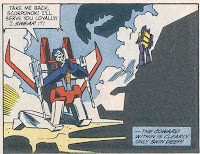 On Earth, Starscream seems unstoppable.  Scorponok is certainly cowed, remarking that he will direct the counter-attack from the rear.  Hot Rod, though, manages to save the day by getting in a direct hit to the shell.  Starscream roars in pain, and Scorponok realizes that they are indeed dealing with a mortal.  "It can feel pain -- it can be hurt!" admonishes Optimus, in a classic Furmanism.  (Nice lettering here, by the way.)  With Scorponok counterattacking, Starscream's injures cause his original personality to rise to the fore.  Him being a coward, he immediately blames the whole attack on Megatron and begs for his life.  Riffing on the title of the issue, Furman wryly observes that his cowardace was only Skin Deep.  Thus does one of the three legs of the story come to a very satisfying climax.

Megatron, meanwhile, mops the floor with the Autobot Classic Pretenders, blasting Bumblebee through his fortress wall, sidestepping Grimlock's charge and allowing the lummox to fall out, and then knocking Jazz's head into his Pretender head and chucking them out too.  "Two heads are not necessarily better than one!" he quips in a very comic booky manner.  He then send his minions out after them, while he goes to find Ratchet. 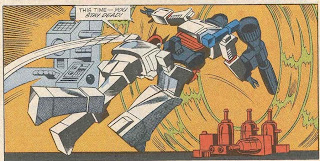 Ratchet, the true hero of the arc, has failed to contact Optimus, though he at least contacts the Ark and starts to coordinate with them.  Megatron observes him run up to the trans-time dimensional portal and erroneously assumes that he's trying to escape.  Ratchet, with a fusion cannon pointed at his head, gloats about how Starscream's MIND might have been blank, but his PERSONALITY was still there.  He also directs Megatron's attention to the pile of boobytrapped explosives that he teleported to the base from the Ark.  With only seconds to spare, Megatron attempts to flee through the portal, only to have Ratchet tackle him at the very last second.  BOOM!  (Or, should I say, "BRADDAKOOM!")Yup, Ratchet out-maneuvered Megatron at virtually every turn, reactivating the Autobots, sabotaging Starscream, and thwarting the attempt to destroy the Ark.  Why, he even prevented Megatron's escape... more or less.  More on that in issue 69.  In one fell swoop, Furman removes the threat from the Ark and gives Megatron his comeuppance, all while using elements already introduced in the story. This is very slick storytelling, with characters who we care about.  It bodes well for the rest of Furman's run.

In the 3/4th of a page denouement, the Autobot Pretenders watch the base destroyed in horror.  On Earth, Hot Rod can't quite believe that Optimus let Scorponok withdraw with Starscream.  Optimus observes that, with Starscream's history, he could be more of an asset to the Autobots than a liability.  He's much more concerned about Ratchet, and with good cause.  In fact, the blurb for next month even says as much.  "You SHOULD be worried, Optimus Prime! Judging by what happened to the Decepticon Base, it looks like Ratchet is one of YESTERDAY'S HEROES!"  Sounds intriguing.  Skin Deep is is available for purchase  in IDW's  Classic Transformers Volume 4

Delbo certainly likes to give Transformers rather beady pupils, doesn't he?