Wow, what a blast.  This was my very first time going to a San Diego Comic Con, and I didn't QUITE know what to expect.  I'm not a fan of long lines or big crowds, so I was a bit daunted.  However, Bill was very keen to go and with a free Pro badge I didn't see much downside.  We resolved to attend but not try TOO hard to see everything.

Impressions:
EVERYONE was here.  I got to talk to EJ Su and Marcelo Matere over at the IDW booth, David Willis over at his booth, Aaron Archer and Eric Seibenaler just randomly walking around, my former editor Denton Tipton, amazing pin-up artist Olivia, Bruce Timm, Art Adams, J. Scott Campbell, Sean "Cheeks" Galloway, Greg Weisman, and a ton more.

DCAU figures aren't down for the count just yet!  We're finally getting a Kalibak, which is the DCAU figure that I've wanted the most for the longest.  We're also getting a Toyman, a Killer Frost, Guy Gardner, Parademons, Golden Age Flash, The Grey freaking Ghost, and plenty more.  I must have turned to Bill at least five times during the convention and said "Kalibak! Kick-ass!" 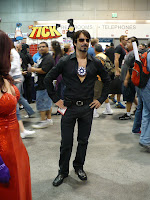 Lots and lots of costumes!  I love a good costume, so it was fun to see so many beautifully done ones walking around.  We snapped a few photos here and there, but really couldn't get close to having all of them represented.  The one I enjoyed the most was probably Archer and Lana, from the spy-spoof cartoon Archer.  Storm Trooper Elvis and The Colonel were also pretty cool.  I think Bill was most smitten by Black Cat.   Last Halloween I dressed up as Tony Stark, but this guy put me to shame!

The shanty-town behind our hotel? Wow.  It makes me thankful for what I've been blessed with.

So, those are my initial impressions.  I'm sure more will come to me in time, but that was what stood out.  Made some good contacts, kept up with even more contacts, got a few cool souvenirs, and generally just had fun. Oh, and check out my Flickr set for the dozens of photos Bill took.
Posted by Jimtron at 11:44 PM

Email ThisBlogThis!Share to TwitterShare to FacebookShare to Pinterest
Labels: SDCC

I can't believe you actually posted the tents... XD

One of thnese days Ill make the trek to SDCC, when I am rich or something.

Also, how do you get Blogger to let you post more than one picture per blog update, it will never let me do that :(