Review: War of the Worlds, the series ep 18 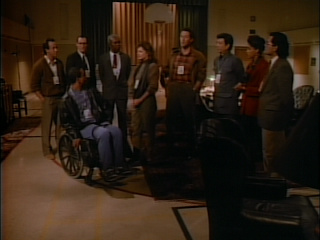 The Last Supper is the eighteenth episode of War of the Worlds, the series. Rather unforgivably, it's a clips episode. The framing story is that several of the nations of the world have gathered in Philadelphia to discuss the alien menace. Our team spends a lot of time telling them about past exploits. The aliens catch wind of this gathering and attempt to eliminate the opposition. Our heroes manage to repulse the full-on alien attack that commences, leaving them more determined than ever to defend their world.


The Good: If you're going to do a clips episode, at least they chose to use it to widen the scope of the conflict.  Previously, we'd seen the Soviets become aware of the aliens in Epiphany, but now it's somewhat more global. 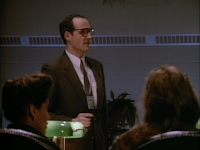 Speaking of, the Soviet intelligence agent who outs the alien among the representatives of Earth was another well-done character. The show always managed to be aware of the Cold War while keeping with the theme that the Aliens are the real threat, enough to make old enemies put aside their differences.

Also, all the security, especially at the beginning of the episode, was nice. You definitely got the sense that the government was trying REALLY hard to keep everyone involved safe. Multiple checkpoints, heat sensors, hand scans, etc. It failed, but A for effort.

It was nice to see Sergeant Coleman and Omega Force back so soon after their introduction. They did well, but not TOO well, against the alien assault. 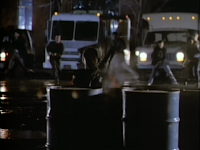 The alien attack on their position was weird and makeshift, like almost everything the aliens do. We see a convoy of trucks and vans getting loaded up with weapons, then roll out to the Elementary School where the secret meeting is taking place. It makes sense, the aliens would have relatively easy access to trucks and little access to tanks. Then we see apparently ordinary looking people running up to do battle, which again tracks. They have no need to steal the bodies of soldiers - any human can be an alien soldier.  It's also quite big, with plenty of props and extras.

The Bad: I mean, it's a clips episode. I don't know if it was mandated by the studio to make the show more accessible to new viewers, of if they wanted a huge attack and the only way they could afford it was with a bunch of clips, but it's a big disappointment.

There's also a big missed opportunity. Katya, from the aforementioned Epiphany, left Harrison to go to Russia to fight aliens. She'd have been great in this episode. Even if they couldn't get her, the KGB agent was established as a 'last minute substitution' from the original representative. It'd have been trivially easy to establish that he took Katya's place. Heck, it's a clips episode, you could have SHOWN her scenes with Blackwood.

Did I mention that it's a clips episode? Ugh. 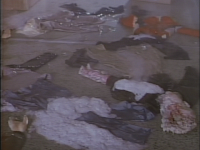 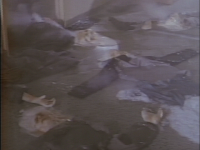 The Ugly: Well, nothing much more than alien corpses, but at least there were a lot of them!

So, overarching thoughts on this episode? What a waste. A very weak premise, with a merely adequate execution. There's little to recommend it.

War of the Worlds - The Complete First Season

is available for purchase on DVD if you care to check it out. Thankfully, this episode is hardly representative.
Posted by Jimtron at 12:10 PM

I have no idea what prompted them to do a clip show but I believe that it was a demand coming from Paramount. I have the script (although it's a revised version) and what aired is pretty much straight from the page.

I did enjoy the revelation of the number of aliens in China and I did enjoy the Advocacy segments, particularly the one of the Advocates being hypnotized by the tv screen, and not knowing why they enjoy it.

It's a mixed bag of an episode- enjoyable but definitely a clip show.

Well, at least they showed clips from the movie. Always glad to see more of the alien ships, seeing as how they are given so little screen time in the series.