The Allspark Needs Your Help! 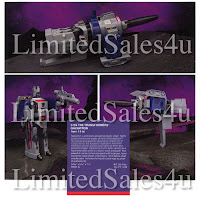 That's where you come in.  NightViper over at the excellent AllSpark website is taking up a donation drive.  If you think that you might be able to spare $5 for this cause, then head on over to the AllSpark for info on how you can help.


UPDATE 1: WE GOT IT! Kudos, to everyone. This is exactly what I was talking about when I praised the Transfandom community.

UPDATE 2: Thanks to Galenraff over at the AllSpark, this has now become a full-on charity drive. He's trying to raise a total of $380 for charity, a match for the price of the book, and is already up to $70. So, if you can spare it and want to support this effort (all proceeds go to the Hasbro Children's Hospital), then head on over and lend your support.

UPDATE 3: I wanted to bump this post up.  Galen set a VERY ambitious $2000 goal for Sunday, the 28th of February.  This is enough to get us in as a high-tier benefactor to the Hasbro Children's Hospital annual Game of Life gala.  We're less than $300 away at this point, with a good 12 or so hours to go.  If you can spare even just a few bucks, it's a good cause and a wonderfully collaborative approach to giving that reflects well on Transformers-fans everywhere.  Won't you?  Info on giving HERE.


FINAL UPDATE: This was an amazing smashing extraordinary success!  143 Transformers fans raised $2,340 for charity in just five days, and that's on top of the catalog we also managed to buy.  (Oh, and we plan to auction the catalog and give the resulting funds to charity too.)  That's a pretty impressive grassroots campaign. The whole fandom should be proud; I know I am!

Email ThisBlogThis!Share to TwitterShare to FacebookShare to Pinterest
Labels: Call to Action