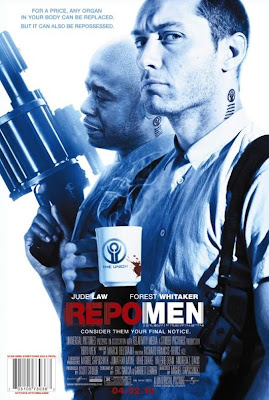 Last month, I teased my interview with Repo Men director Miguel Sapochnik. This week, with the premiere rapidly approaching, Universal Studios has cleared me to publish it here.  In case you can't tell from my questions, I REALLY liked the film, so it was a real thrill for me to be able to speak with Miguel.  Without further ado: 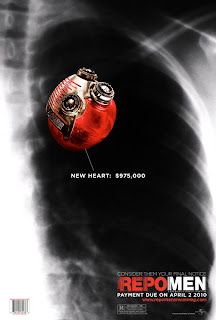 The movie posters are just brilliant, teasing the audience with intriguing but somehow grotesque images of medical devices.  Where did that idea come from?
It's been an idea we've been keen on for a very long time. Again it's all part of selling the world to the audience and then letting the film come out and get on with telling one of the stories from that world.
There is a bit of a stir among fans of ‘Repo the Genetic Opera’ about the similarities between your film and their rock opera.  Would you care to respond?
RTGO is the Rocky Horror Picture Show version. Ours is more like the Pulp Fiction version. They are two films that have similar concepts but that's it. Jesus Christ Superstar vs Last Temptation Of Christ? Anyway, last week the writers of Repo Mambo and I met with the writers of RTGO and their director Darren Bousmann and had a good chinwag about it. They were good guys and I am glad I got to meet them and clear the air.
When i first saw this movie, the film that it most reminded me of was Brazil.  Are you a fan?
Huge. Brazil is one of my favorites and was a huge influence for Repo Mambo. Along with Clockwork Orange, Trainspotting, Robocop and Children of Men...
Anything else you’d like to share with my readers?
Go see the movie and make up your own mind. That's what it was made for. The simple truth is the more successful it is on opening weekend, the more chance of Hollywood studios letting people like us make smarter films. March 19th 2010. Www.repomenarecoming.com
Posted by Jimtron at 10:02 AM