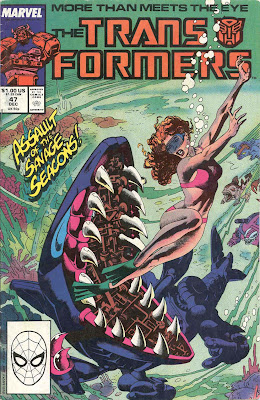 Club Con! is the forty-seventh issue of the US G1 Marvel Transformers series.  It's also the first issue of the four-issue Underbase saga.  It was written by Bob Budiansky, drawn by José Delbo, inked by David Hunt, lettered by Bill Oakley and colored by Nel Yomtov. The cover is a Budiansky, with Kevin Nowlan.

It's a lovely cover, one of my favorites. Jesse swims away from Overbite, who's all mechanical jaws. It's evocative of a classic thriller movie, and the contrast of the green sea works well for our pale heroine and the dark Decepticon pursuing her. Great detailing on the mechanical jaw.  "Assault of the Savage Seacons!" it proclaims, letting us know who these baddies are.  It's a real winner.

The story itself is more mixed. It opens, perplexingly, with Starscream landing in front of a family of humans.  "Hi, I'm Starscream. Fly me!" he says, and we get some ad copy about a tropical vacation.  Incongruously, we're told that this is the beginning of a four-part epic, the Underbase Saga!. I'm skeptical, but ok. After another page of advertising, we cut to the Autobots. Optimus Prime is back on Earth, and Fortress Maximus and Grimlock are subordinate to him. Thus, we immediately establish the new status quo. Grimlock seems particularly stupid this issue; maybe they lobotomized him as punishment or something. The Autobots figure this is some kind of elaborate cover story, but when Buster shows up as the 'king' of the island, they decide that they have to find out what the 'Cons are up to.  Prime knows just the Autobot for the job ... Blaster! All told, it's a really awkward sequence. Bob tries his best to sell the idea of the resort, but it doesn't jive with the paranoid, anti-robot sentiment he's worked so hard to build. After meandering around for a few issues with bikers and carnivals, it feels like we're missing a necessary step in the story; the actual return of Optimus Prime to his troops.


We next see Blaster, training with a bunch of Autobots (and, um, Runamuck.) He's as bad-ass as ever, and looking forward to his new mission; infiltrating the resort with the help of Sparkplug. Sparkplug has, of course, sworn off having anything to do with the Transformers, but he'll do whatever it takes for his son. Jesse, though, thinks that she'll fit in better due to her age. So, off they go! While it's nice to see Jesse again, the logic doesn't seem to be there. Why not send Spike, rather than drag Jesse (or Sparkplug) into the conflict again?

We're treated to a brief interlude between Starscream and Ratbat. Starscream has become Ratbat's new second in command, and he seems to be much closer to his cartoon self. Since Grimlock does as well, one wonders if Bob had recently rented The Transformers: The Movie. I love the body language on Starscream, it just oozes casual disrespect. The seeds of the arc are being planted here, one can immediately tell.

Starscream goes off to greet the newest arrivals, including Jesse and her radio. Blaster cautions her to stay out of it now, but she decides to go snooping around and finds the Seacons, scouring the ocean floor. When she finds an undersea tunnel into the 'Con base, she comes back with Blaster to instigate. Together they find Buster, chained to his chair. Blaster bemoans being unable to help him, due to the small room restricting his Transformation. Buster does tell them about what his captors are after; two Autobot cassettes containing important information. This, too, makes little sense, since the Autobots on Cybertron had no idea there were Autobots on Earth. If they did, why not mount a rescue? The cassettes were damaged and wound up in a pirate's treasure chest, which in turn ended up on the ocean floor. 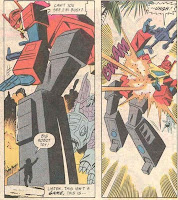 As Jesse and Buster start to leave, the Seacons emerge from the tunnel with the chest. Talk about good timing! Jesse waits till they're not looking and grabs the Autobots. Ratbat almost immediately notices something amiss and sends the Seacons to retrieve the cassettes.  They emerge on the beach and begin firing into the crowd, prompting Blaster to take a stand. Him being the uber-tough Autobot that he is, he manages to hold his own for a bit, until a little kid runs up to him. This distraction proves enough to get him shot, and he has little choice but to spit out the cassettes into the ocean. When the Seacons move to retrieve it, he switches back to his boom-box configuration. This, too, is of course absurd. How could no one see Blaster transform back? How could not one of six Seacons keep an optic on him?

The Decepticons send the humans home, apologizing for the 'incident'  Jesse apologizes to Blaster for messing everything up, as well she should. Blaster absolves her, though, since thanks to her they know how important the cassettes are. When Starscream implores the humans to come back and visit again, Blaster vows that it'll be sooner than the Decepticons think. Of course, they already had an inkling of this before she gave away their position, so really she did just screw things up. 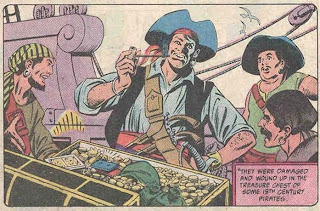 Overall, it's fairly lackluster. The art is competent, generally nothing too inspired but at least there's nothing wrong with it. (Delbo had fun drawing pirates, though! He gave more energy to this panel than any other in the book.)  It's not even the logical flaws that hold the issue back, though those are plentiful.  It's that there's no soul to the story.  Sadly, I find this issue to have much less wit or charm than the issues immediately preceding it. There aren't even many good character moments to punch things up.  Starscream is the one true gem of the issue.  Even Blaster, who Budiansky normally writes with such aplomb, feels very rote here.I want to enjoy it as the first part of some kind of epic, but it feels a lot more like some sort of prelude than like a worthy chapter in its own right. He's building to something big not because the story calls for it, but because we're approaching issue 50. I think the burn-out is really starting to show.


Next month, "Optimus Prime vs Megatron!"  Whu? Also, we get "The secrets of the Autobot tapes revealed! And more Robots than you can shake a microchip at!" Sound intriguing. Club Con! is the opening chapter of IDW's  Classic Transformers Volume 4

, a great book with a large variety of stories.  Order yours today!
Posted by Jimtron at 10:06 AM

Why not send Spike, rather than drag Jesse (or Sparkplug) into the conflict again?

My personal theory is that, at this point in time, Budiansky was still operating with the idea that Nebulans (and Spike), once modified, always had the armor on (i.e., it wasn't removable as in the cartoon, and as Budiansky himself depicted Spike a mere four issues later). Thus, Spike would either have to wear a heavy overcoat or travel to the island looking like a robot. Neither would be conducive to maintaining the guise of a tropical vacationer.

It is also possible that Spike, who is binary-bonded to the Fortress Maximus, is too important to risk in this mission.

The Autobots could also have felt that Spike is too attached to his brother that there is a possibility that he could compromise the mission. Would Spike have willingly left Buster behind like Blaster and Jessica did?

These are both very reasonable theories. If Bob had chosen to pay lip-service to any of these ideas, I wouldn't have called it a flaw of the story. Since he didn't, I do. The story drags so much, in so many places, that he could surely have found room for a panel of such exposition.

In fairness, I think the decision to pick Jesse was that Spike probably wouldn't look as good in a bikini on the cover ...

I agree it was a pretty uninspiring issue. And a bit of explanation as to why the usually-astute Ratbat would promote – or even reactive – Starscream would have been useful. Couldn't someone like Soundwave have warned him?

There is one thing I don't think any of you have considered (that I assume Bob did). Correct me if I'm mistaken, but the Decepticons have already met Spike, so they'd know what he looks like, whereas as far as I can tell none of them knows Jesse. It doesn't really explain how they don't know Blaster (even though he's in radio form), but hey, vehicles in disguise.

If memory serves, Scorponok's crew have met Spike, but the only time he encountered Ratbat's decepticons was during the launch of the island spaceship, when he was joined with Fortress Maximus (the only one to get a good look at Spike's face was Shockwave, and he wasn't in a position to tell anyone about it).

Conversely, Ratbat himself would have seen Jesse during the 'Carwash of Doom' story. He may not have paid much attention to her, but that still makes her more conspicuous than Spike.

I'll take your word for it- my mistake! I only read the first part of the series (up to around 14 or 15) & a few here & there after that grabbed me (like say anything with a Jim Lee cover or issue 50).

I would say the fact that Ratbat has already seen Jesse makes it all the more worse! Well- at least she's nicer to look at then Spike.