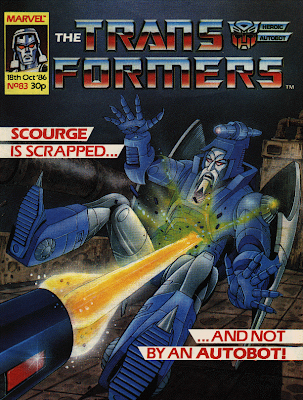 
The cover was also by Geoff Senior and is a fairly dynamic picture of Scourge being blasted by a mysterious character from off-panel. "Scourge is scrapped!" reads the caption, "And not by an Autobot!" It's fairly obvious that the perpetrator is Megatron if you've been following the story and you can see the end of his fusion cannon at the bottom of the cover. It's a pretty decent effort. Scourge looks suitably shocked at what is happening to him and he really seems to be in a bad way. The colours are a little strange, Scourge's blue feels a bit too bright, but that's a nitpick. It's not a classic cover, but it's well done.


The story picks up the cliff-hanger from two issues ago. The robot smashing his way out of a stasis pod is revealed to be Starscream (it's tempting to call it a CR - Chamber, but that term was first used in Beast Wars). It seems that Starscream had been stored there as a prisoner after Omega Supreme handed his skidplate to him back in Issue #71. Buzzsaw, Skywarp and Rumble are confined too, in critical condition but Frenzy and Thundercracker are nearing full recovery. Starscream hears voices arguing. He creeps through the corridors of the Ark to investigate and is stunned to discover...


...Megatron arguing with a group of Autobots. Starscream hides around a corner as Megatron and Jetfire debate angrily about their course of action. Jetfire is telling Megatron that he is the one in charge and that Megatron needs to acknowledge this. Megatron counters this by describing the series of failures that led to Ironhide's decision to enlist the aid of the Decepticons - this serves as a useful summary of the story so far for new readers.
Listening to this and learning, for the first time, about Galvatron's existence Starscream formulates a plan. He must go and seek out this being who is powerful enough to bring both the Autobots and the Decepticons to their knees and make an alliance with him! This is pure Starscream. He has only been online for a few minutes and already he is making plans to betray his former comrades and rule the universe with a new partner. Starscream is a coward in many ways but his willingness to put himself on the line in order to seek new opportunities for advancement is unmatched. He beats a hasty and unobserved retreat. 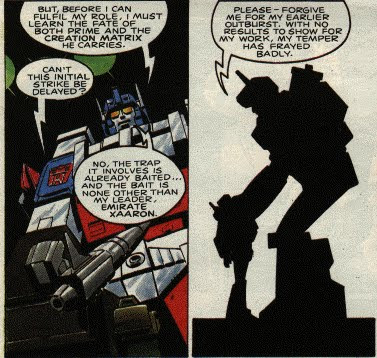 Into this mess walks Ultra Magnus and he is shocked at what he sees! He is so incensed that the Autobots are planning to follow Megatron into battle that he grows to twice his normal size (just for this issue) lecturing an inexplicably tiny Hound on why this is a terrible idea. Magnus breaks off his rant when he realises that the other Autobots don't yet know why he is under so much pressure to find Prime and the Matrix. He explains about his part in Operation Volcano and why he needs to be back on Cybertron. He understands why Hound has to follow the others into battle to find Jazz, but he cannot join them, so with a final warning not to trust Megatron, he lets him go. 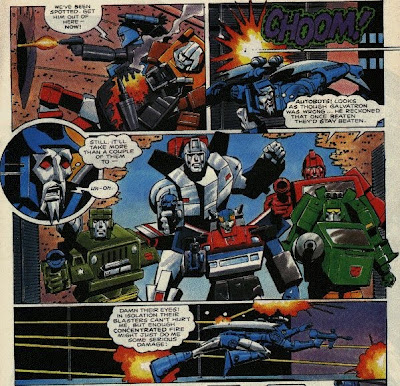 Some time later, Scourge is grumbling that he has been given the task of collecting materials from a metal storehouse when he should be fighting. His prayers are soon answered when he realises that the Autobots are about to ambush him. Although Scourge is heavily outnumbered, the future Decepticon puts up a considerable resistance, forcing the Autobots to run and gun through the warehouse before losing his gun to a lucky shot and forcing his way outside, severely wounding Grapple in the process. Escape is not on the cards, however, as Scourge runs flat into Megatron who disables him with a blast of his fusion cannon.

In Galvatron's lair, Jazz comes to. He accuses Galvatron of being "Just like Megatron" to which Galvatron replies, in a revelation that stuns Jazz and shocks the reader "Not like Megatron... I AM Megatron!"

This is, of course, an extremely important issue for those readers who had not seen Transformers: The Movie, which, if www.imdb.com is to be believed, was none of them, because it didn't come out in the UK during this. Even if it did, the release would have been nowhere near as wide as that of the comic book. The final reveal of Galvatron as a future version of Megatron has enormous far-reaching consequences for where the story might be heading and makes the inevitable future meeting between them much more potentially interesting than it might already have been. If Megatron kills Galvatron then he has given himself an expiry date, but if Galvatron kills Megatron then he has destroyed his own past and created a time paradox. We do not yet know the rules of time travel in the Transformers universe, but neither of those options sound like good ones for Megatron, and he doesn't even know it yet.


It's certainly not unexpected that the Autobots alliance with Megatron is already starting to feel strained. Of all the Autobots left it is only really Ultra Magnus with a strength of personality (and firepower) to really challenge Megatron - Jetfire just comes across as weak and Ironhide, who has brought this situation on, can only bluster ineffectually. Unfortunately Magnus has different priorities and the Autobots can really do nothing other than follow the Decepticon leader.
The action sequence with Scourge is very well staged and I love that this future Decepticon is so advanced that it takes all these Autobots and Megatron to take him down - and this isn't even Galvatron himself.

I have long been a huge fan of Geoff Senior's artwork but this issue is not his best. The main problem, as I've already mentioned, is that Ultra Magnus is far too big during his brief appearance. I suspect that Senior had been using the toys for reference, as the Ultra Magnus toy has a very tall and chunky robot mode. He is excellent at very dynamic motion, however, and his panel of Impactor in full battle rage is probably the most exciting in the issue, even if it does come from a recap.

A good issue with a little too much recapping to feel like a complete entity, which is no bad thing in a story this lengthy. Of course, the revelation at the end is game-changing and makes this issue a must-read classic in one panel.  IDW's trade of  Transformers: Target: 2006

is available from Amazon.com.
Posted by Jimtron at 10:53 AM

I was also baffled at Ultra Magnus' size, I think Geoff Senior got a hold of the actual toys, because when you pot those next to eachother, the size difference between the two makes sense :)

Like with us in Holland, the movie did come out in comicbook form in the UK (I have this very nice UK-format collection of the 3 issues, with a sturdy cover. Possibly the best release of the movie comics anywhere), so the readers could understand it's impact, even though we didn't actually get to see the movie until at least 1987 (on videotape).

The 1986 film came out in UK cinemas on December 12th 1986, which was between issues #91 & 92 of the UK comic. (According to one of the letters pages at the time this was a push back from November 28th, presumably to get the movie closer to school holidays.)