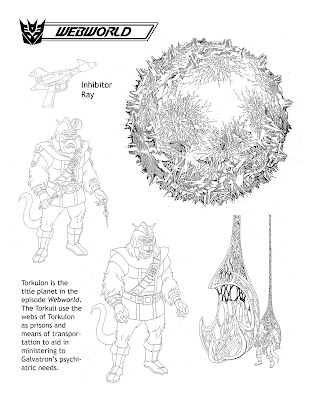 It's time for more of The Ark Addendum. All this week, and for a little while yet to come, I bring you Webworld. Webworld was a third season episode and one of my favorites. It probably was the most Decepticon-centric episode of the series, with only a brief Autobot/Decepticon scuffle in the beginning of the episode. After that, it was all-Galvatron, all the time. It lampoons the mental health system, examines how the Decepticons would chafe under an insane leader, and manages to be very funny to boot. It's also one of the few episodes where I have virtually every model. I decided to to package all of them together, so the next few days will be all-Webworld, all the time. I hope you enjoy.

This is a good time to introduce the newest Disciple of Boltax - Monzo. For those of you who don't know, Monzo is what I'd call an über-fan. Named for the Headmaster, he has devoted a good fraction of his energies to obscure facts, merchandise and characters from Transformers. Check out his website if you have a moment. He's generously agreed to share some of his findings here, so I look forward to seeing what treasures he will unearth. You can thank him for most of the background images from Webworld that I'll be displaying, including the lovely shot of the planet itself.
Posted by Jimtron at 11:40 PM