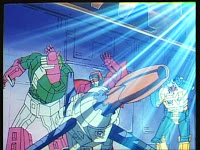 Zarak: It's true. I planted a time bomb in Vector Sigma.
Galvatron: What? In Vector Sigma? Are you serious?
Zarak: We'll be at a disadvantage if the alloy falls into enemy hands. It had to be done to ensure a Decepticon victory.
Galvatron: Fool! Who allowed you to do it? I'll stop this.
Soundblaster: Wait, Galvatron!
Galvatron: Shut up! Your job is to gather intelligence. What have you done?
Soundblaster: You never learn, Galvatron.

We now arrive at Part Deux, as they say, of this two-part story arc concerning what could be the final moments for Planet Cybertron. Vector Sigma has developed a new, impenetrable alloy called Cybertonuron, which would tip the balance of the war in favor of whoever recovers it first. Battle between the Autobots and Decepticons rage across Cybertron as they fight to either protect or retrieve this metallic substance, respectively. Zarak, a rogue with his own agenda, has decided that he cannot take the chance that Galvatron will lose this battle plus the Cybertonuron and thus has tasked his team of Headmasters with planting bombs deep in Cybertron to destroy the planet altogether.

Chromedome and his team have split up to search out the planet-wide conflicts and Chromedome himself spies Mindwipe and Weirdwolf transporting what we, the viewer, know are the three explosive devices. Meanwhile, Galvatron is dismayed at his troops inability to defeat the Autobots and Zarak advises him to change his strategy. His advice is not taken, of course.

Chromedome follows the Decepticon Headmasters to the entrance which is known to lead to Vector Sigma, so he immediately suspects they will try again to take control of the mother computer. He uses a special telepathic ability, which only he and his fellow Headmasters developed in the rough conditions of Planet Master, to route Fotress and the others to his location. Fortress alerts him in return that the Cybertonuron alloy is finished and once they are reunited, they blast their way past Weirdwolf and Skullcruncher in order to chase after Mindwipe, already on his way to the heart of Cybertron.

Both Mindwipe and Chromedome separately encounter the various defenses of Vector Sigma. This results in one of the funniest moments of the series, as Mindwipe is attacked mercilessly by bats and complains aloud "why are you bats attacking another bat?" before crying "I hate bats!". Ah, the irony. This, plus his outright glee at finding Vector Sigma, make Mindwipe a surprisingly endearing character, even as he carries out such a dreadful plan.

Mindwipe soon affixes the explosive charges to Vector Sigma's supporting structure, sets the timer, then Chromedome arrives to stop him. Unfortunately he finds that the charges cannot be detached or disabled, even with help from the other Headmasters, so Brainstorm advises them to quickly warn everyone on the surface. Zarak alerts Galvatron to this fact as well, who then becomes enraged and races off to stop the bomb, saying to himself that the planet belongs to him.

Fortress informs Rodimus of this terrible fact so the time remaining must be used to evacuate the Cybertron. They are all of course shocked that the catastrophe cannot be stopped and take a final look at the landscape of Cybertron before escaping by way of the Trainbots. In the depths of the planet, Galvatron arrives at Vector Sigma just as the counter reaches zero and so he is caught in the intense explosions which erupt.

We see what is actually quite a haunting image, the burned out husk of Cybertron, now only a dead sliver of itself hanging in space. Narration tells us that heavy losses occurred during this battle for the alloy, so at this point, Matrix only knows who made it off the planet in time. Rodimus and the others survey the damage and the following exchange occurs:

Daniel: Rodimus, let's go home to Athenia.
Rodimus: Thanks, but I have a journey I must make.
Daniel: A journey? Why?
Rodimus: The age of old transformers has passed. This is an age for the young. I'm going on a journey to find a planet without war for the Transformers to settle on.
Fortress: But the commander's mission is to lead us.
Rodimus: I'll leave somebody in charge.
Fortress: In charge?
Rodimus: You're the new commander as of today.

I remember first watching this episode and being astounded that the writers actually really went through it, actually destroying Cybertron, home planet of the Transformers. In one bold stroke, they completely removed the series' home base and source of many struggles and plots, as well as having Rodimus depart to deep space, leaving Fortress as leader. If one looks at this rather crassly, this was done obviously to keep the new characters front and center without having to share the stage with last season's bots, but in terms of the overall G1 story arc, it does help reset the game. If a fan wanted to accept this series as Season Four of the G1 universe, then this unsettling turn of events certainly raises the stakes grants a unique tone. It untethers both Autobots and Decepticons, due to the devious plans of another, Zarak, who seemingly cares nothing for either side and also held very little sentiment for his own home planet.

One does have to question, what was the ultimate purpose for Vector Sigma developing the Cybertonuron? Could it have wanted this to start a conflict so severe it would destroy the planet? Was it hoping to push the Transformers to the dawning of a new age by letting go of the past, i.e. Cybertron?

The rest of series could take on any shape and the plans of Zarak are still mystery...
Posted by Brian at 11:06 AM

Is it my imagination or did the animators used original G1 season 1 Cybertron background painting just right before it blew up?

Anyway, I hate the ending.
Rodimus jbasicly runs away... wtf?! Planet is a total wreck. Autobots need him more than ever and just basicly runs away from it all (what a great leader!).
And he assigns Maximus as the new leader... a bot they still fairly hardly know.
And to make matters worse Blurr and Kup just decide to go with Rodimus... oh come on! Shouldnt Kup bitchslap Rodimus back to "reality"?
Couldn't they just kill all 3 of them?
Or just simply use them less?
Shame. :/

Yeah, I guess it is pretty obvious that the writers on HM were willing to sacrifice any integrity Rodimus had from the prior seasons just to shift Fortress to front & center.

However, it does also seem, based on this and other non-TF series, that they are more willing to simply remove old aspects and characters from a series without sentiment or nostalgia holding them back, where it's simply time for something new and so they bring it on.

Now if some enterprising fan wanted to really dig deep into character motivations, following Rodimus' arc over the course of his time as leader, it could be that he felt this was the greater sacrifice to make, to set himself apart from his entire race and make the journey into the unknown, as a leader's responsibility of often to find a home for his people. And he probably had to acknowledge that having an Autobot leader which transforms into a huge, freakin' battleship is pretty damn reassuring - and hard to compete with! :)