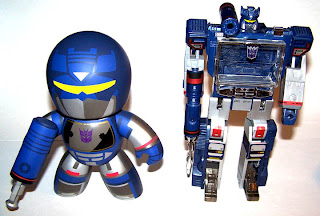 Sometimes I think Hasbro tries to come up with action figures in alternate formats in order to get collectors to keep buying the same characters. For instance, there are only so many Star Wars action figures you can buy until you have pretty much every character that's been produced—multiples, in the case of some characters, to account for their different costumes or accessories. I'm at a point where I'm probably never going to buy another Darth Vader action figure because I feel like I've got every conceivable variation on the guy—which ain't hard since he never changes his costume—for every possible diorama or display scenario. Hasbro's clever little solution, then, is to produce a series of characters in different styles or sizes. The short-lived Jedi Force toy line included super-sized versions of popular characters with spring-loaded features or light-up weapons. Then there was the Galactic Heroes series, consisting of cute and cuddly super-deformed versions of the characters; I started my collection about five years ago, which has grown to a surprisingly diverse assortment. (Yes, I have Darth Vader toys from both these assortments now.) Now there are the Mighty Muggs, one of the most ingeniously-designed marketing ploys in history, and yet another reason for me to buy all my favorite characters over again.
All of the Mighty Muggs figures are essentially the same toy—a featureless, doll-shaped, soft vinyl figure. What distinguishes each toy from the next is the paint job, which attempts to translate a surprisingly diverse range of characters into the shape of something resembling one of the Powerpuff Girls. The nature of the figures makes them eminently customizable—Hasbro even sells unpainted white or black Mighty Muggs as a blank slate for the entrepreneurial hobbyist. (Other companies have even begun to imitate the toy line. Jakks Pacific, for example, markets a line of Urban Vinyl Collectibles that includes the Smurfs. How you can make the Smurfs even more cute and cuddly is beyond me, but there you go.) The series began with Star Wars characters but has since expanded to include Indiana Jones, during last year's summer movie tie-in; Marvel Comics characters; and G.I. Joe. (When the series first began the toys had a patent pending notice, but Hasbro has since applied for at least two separate patents to protect them. A patent protects new products in the same way that copyright protects creative works.) Transformers is one of the newest brands to join the Mighty Muggs family, though as of this writing the selection of available characters is comparatively meager (Optimus Prime, Bumblebee, and Megatron are the other characters available in the first wave, and Starscream and Grimlock will be added to wave two; Jazz and Shockwave were scheduled to be part of a third wave but have been cancelled, with no new figures on the horizon at the time of this writing). 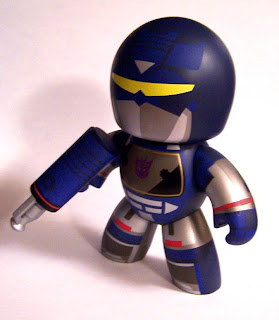 Mighty Muggs come in a universal package size with a standardized box design featuring the character's portrait (the artwork is so close to the final product that I wouldn't be at all surprised if this were the actual template used for the paint applications), the character's name in lower-case letters (shades of e. e. cummings), and the series to which that character belongs (the Transformers characters, in this case, are identified as part of Transformers Universe, though the logo hearkens back more to the original toy line than the current 25th anniversary assortment). The tagline for Mighty Muggs is "made from 100% recycled awesome," which is kind of a misleading slogan—one could interpret this to mean the toy, the packaging, etc. are made from recycled materials, which isn't actually the case. I'm sure it's meant to imply that all the characters offered under the Mighty Muggs banner were "recycled" from other, earlier toy lines (I don't believe there's been a Mighty Muggs toy yet that hasn't already been represented in some other action figure form). There's also the fact that most of the Mighty Muggs share the same production mold, so you could say that the same toy design is being "recycled" to produce dozens of different toys. (The tagline for the Transformers assortment is "awesomeness is the right of all sentient beings," which you wil recognize as a variaiton on Optimus Prime's original tech specs quote. It would have been interesting if they'd played around with each individual character's personal credo—"The least likely can be the most awesome," etc.)
Soundwave is the standard Mighty Muggs height, just slightly under six inches in height. (There is also a shorter variety of figure that is trotted out to represent midget characters like Yoda and Bumblebee, but it's been used sparingly.) The figure is articulated at the head and shoulders; the legs look like they should be poseable, but they don't actually move. (The figures don't have toes or heels of any kind—their feet are perfectly round little tree stumps—so locking the legs in place might have been a counter-measure against preventing these things from falling over. After all, they're useless if they won't stay on your display shelf, since displaying them is just about all you can really do with them. The figure has a square-shaped peg hole in his right foot, suggesting he's designed to interact with a figure stand of some kind, but the regular Mighty Muggs don't come packaged with one.) Many of the Mighty Muggs come with signature weapons or accessories (arguably the only new element Hasbro has to design for each toy); Soundwave comes with a super-deformed version of his original rocket launcher (identified on his packaging as simply a "blaster"). A gun shaped like an "AA" battery is distinct enough that I doubt it will ever be used for future figures, so this accessory will likely remain unique to Soundwave. 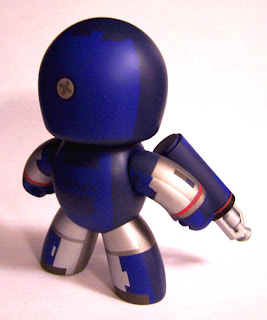 What really makes or breaks a Mighty Muggs figure, of course, is the paint job. Secondarily to that, it's how well the character translates to being turned into a super-deformed ragdoll versions of himself. In my opinion, many of the Mighty Muggs are so aesthetically appealing on a visual level precisely because of the absurd nature of their designs. Soundwave is an excellent example of this. The original toy was a perfectly box-shaped portable cassette player that transformed into a box-shaped robot. Taking a robot built entirely out of rectangular prisms and rounding him off into a balloon animal should have been a recipe for failure, but somehow, in this case, it just all comes together in a way that works. Since his body parts are entirely smooth, multiple shades of the same color are used to create the illusion of three-dimensional details (the sides of his head and body are dark blue, while a brighter blue is used for the details on his front and back). What sets Soundwave apart from the other Transformers-themed Mighty Muggs is that he's based entirely on the original Hasbro toy. While Bumblebee's got his cute little boy face and Optimus Prime's got blue eyes and windows and Megatron's got that animation-inspired bucket helmet, Soundwave has absolutely none of his Sunbow cartoon model in evidence. This means he ends up with details like yellow eyes, that mask with a little nose-shaped notch cut out of it, and even a large paint application in the back of his head that looks exactly like a machine screw. His cassette door window is depicted here as black, with a grey stripe representing a reflective sheen that also hints at the cassette hubs inside his chest. Rather than being a tiny little version of a popular character, Soundwave looks more like a short, fat version of another toy. (I expect a lot of fans, particularly casual collectors, won't make the distinction between "Hasbro toy" and "animation model," so if they see Mighty Muggs Soundwave they'll just recognize him as the robot from the 1980's with the cool voice.)
Mighty Muggs obviously aren't for everybody. A lot of fans are turned off by the peripheral Transformers merchandise that doesn't actually transform, so their opinion of the Mighty Muggs is likely to be similar to that of their feelings towards Robot Heroes, Robot Replicas, etc. As I've said before, though, the capacity for a toy to actually change into a weapon or vehicle isn't always the point. Mighty Muggs takes the cute, cuddly aspect of Robot Heroes and takes it to an entirely different level—if Robot Heroes are sweet, then Mighty Muggs will rot your teeth right out of your head. Whether you find this particular facet of Transformers appealing, of course, is entirely up to you.
Posted by Zobovor at 9:19 AM

Regarding your comment, "Other companies have even begun to imitate the toy line," it's important to point out that Hasbro is itself a follower of the trend of vinyl toys in general and do-it-yourself vinyl toys specifically. kidrobot's munnies were available as early as Spring 2006, and the company has been around since 2002 with its dunny line.

Don't get me wrong. There is a lot to like about Mighty Muggs - clever use of existing properties, price point, scale. But even if they are more widely available, Hasbro was not the innovator here but the imitator.

Thanks for the correction, Colin. I wasn't aware how widespread this fad really was!

I came across your blog when I googled to find the actual height of MtyMgs figures. Thanks for the detailed breakdown of how they look. Extremely informative.

I happened across the transformer MtyMgs while on the Hasbro site. I thought they were cute and wanted more detailed info about them, so I actually went to the kidrobot site because I know (as Colin pointed out) that they've been featuring specific lines of vinyl toys for a while now. I simply assumed that kidrobot had something to do with the MtyMgs figures because of this.

Since kidrobot didn't feature them on their site at all, I finally realized that Hasbro had to be producing their own line of Vinyl Ts.