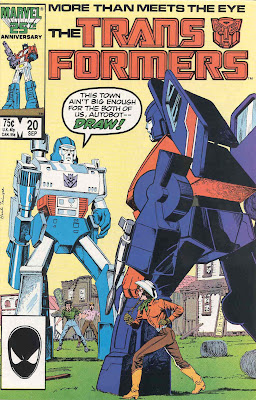 Showdown! is the twentieth issue of the Marvel US G1 run of Transformers. The creative line-up is unchanged from the prior issue. Once again, Bob Budiansky holds the writing reins. Herb Trimpe provides pencils; Ian Akin & Brian Garvey perform inking duties; Nel Yomtov, the colors; and Janice Chiang, the colors. Herb Trimpe again provides the cover.

The cover is quite nice, all told. Megatron and Skids face off against each other, with some humans running around the battle. "This town ain't big enough for the both of us, Autobot -- DRAW!" says ol' buckethead, his cannon by his side. In the background, a town torn from the old west. Oh, and Trimpe didn't miss out on the chance to draw in a few tumbleweeds. It's hard to imagine a more appropriate cover for a book titled Showdown!. Points off, though, for depicting a dream sequence.

As the book proper begins, we pick up on one of the least interesting threads from the prior issue. Ravage hunts the escaping Donny Finkleberg, A.K.A. Robot-Master.

Trimpe borrows two of the three images on the page from the character models, including the classic Ravage pounce, and also a direct shot of his head. I can't blame him too much, since overall it's an effective page. Chiang's title block is spot-on perfect, and Bob's prose gets us into the mood nicely.

Not far away, Donny tromps across the Wyoming countryside in his ridiculous costume, trying to escape the Decepticons and warn the Autobots. A campsight provides him with a quick change of clothes. Finkleberg is less able to take advantage of the injured Skids, though, mistaking him for an ordinary wreck. Ravage comes across the ditched costume and blasts it before realizing that Donny wasn't wearing those threads when they were disintegrated. Off he goes, continuing the hunt, but the stakes have been raised suitably high.

In a nearby small town, enter: Charlene, local cashier and adventurer wannabe. The handsome but boring Wendell, knowing that her car recently died, offers her a ride home. It soon turns into an off-road adventure and hike, wherein they encounter the injured Skids. His functional radio convinces her that there's life in the old wreck yet, and soon Wendel's cousin is patching the Autobot up. Skids, weary of war and perhaps just a bit gun shy, decides that just being a car might be fun for a while. Sadly, he underestimated how safe being a car is, at least in this town. Within moments of leaving the garage, Jake Dalrymple, hothead supreme, has caught sight of the car that caused his run-in with the military. True to his nature, Jake tries to run the car off the road.

This prompts Skids to reveal himself to Charlene, and Jake to get a bucket full of paint all over his Lamborghini. Though Charlene is initially skeptical, her adventurous nature wins out. She agrees to let Skids be her car and learn about humanity.

Donny, enjoying proper food for the first time in a long time, overhears Jake and his girlfriend/wife/main squeeze Frannie talk about a blue van with a mind of its own. Donny puts two and two together, and goes to look for the Autobot. The Autobot who is thoroughly enjoying life at the moment, learning about the old west and making friends with Charlene. They spend several days enjoying the sights, learning about each others species and generally cultivating a friendship.

Charlene, caught up in the dream, blows off Wendell's offer of a date to go home and spend time with Skids. Juxtaposing a normal male/female relationship with the only-slightly-veiled eroticism of a car wash is certainly an interesting choice, but I'm not complaining. Bob has fun with the language here: "polish my hubcaps", "wax and buff job" ... it's a different sort of metaphor from what Transformers usually offers.

Alas, all dreams have to end at some point, and this dream terminates with the rapid consecutive arrival of Donny Finkleberg and his pursuer Ravage. Donny, Skids and Charlene soon find themselves leading Ravage outside of town, attempting to keep more humans from harm. Jake D. again picks up their scent and joins the pursuit. An abandoned gold mining town seems the perfect place for a showdown, and Skids urges Donny and Charlene hide while he prepares to fight the Decepticon. Unfortunately, Jake takes advantage of the apparently abandoned vehicle to KRUNKK it with a tire iron. Skids blacks out and dreams of going one-on-one with Megatron, holding Charlene captive as they prepare to duel. In his mind, Skids fails as Megatron blasts him apart. It's a particularly lovely panel. 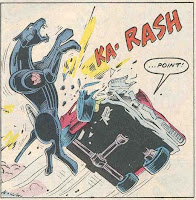 As Donny confronts Jake, Charlene tries to wake Skids from his nightmare. Alas, Ravage arrives just as Skids starts to come back to reality. Jake wants to high-tail it, but Frannie wants to stay and help. In a nice bit of symmetry, Jake rams his car into ravage to prevent the 'Con from finishing off Skids. Given that it was Jake's actions that got Skids injured in the first place, Karma has been satisfied. The extra moments Jake bought Skids are enough. Fully conscious, Autobot battles Decepticon. With a little help from Charlene, Ravage is knocked down a deep mineshaft.

With their adversary defeated, Charlene is eager to get Skids back on the road. It is not to be, though. He's enjoyed his time with her, but he can't live in a fantasy where he dodges his responsibility. Displaying surprising perceptiveness for an alien machine, he suggests that Wendell would probably be happy to take her for a ride. She sadly agrees, and he walks off ... not quite into the sunset, a slightly missed opportunity. The ending is abrupt enough that I think Trimpe ran out of room a bit.

Overall, a fairly solid offering. The theme of owning up to your responsibilities works well with the frequent dream motif. The sympathetic Charlene represents the fantasy, whereas the thoroughly repulsive Jake finds himself in the role of reality, an odd choice but one that works. I normally don't care for dream sequences, but in this case the dream served as a symbolic warning of the dangers of not facing up to reality, a necessary contrast to the pleasant fantasy represented by Charlene. Doesn't Trimpe do a great job with her emotions in this panel?

Another oddity of this issue is that dropping Ravage down a mineshaft will effectively remove him from play for four years! He wouldn't show up again until the Unicron Saga in 1990, though he'd appear just a bit earlier in the UK in Time Wars. It's not wrong, exactly, but it is kind of a funny way to move Ravage off-stage.

Next week, we're promised The Arielbots. It's not much of a promise, especially given that this issue offers a lot more closure than most. At least the date was clever - 'estimated time of arrival, 30 days.' I'll examine that issue next week, as always.

Showdown! is available from IDW Publishing in  Classic Transformers Volume 2

from Amazon.com and other fine merchants.
Posted by Jimtron at 8:09 AM

When I first read this issue as a kid I never did understand that standoff with Megatron and Skids as a dream sequence. Makes a lot of sense now but I think creatively there could have been something done to make the dream quality of these panels a bit clearer. This is one of my favourite issues since I owned the Skids toy and he never did show up in the cartoon except for brief cameos.

This issue is the definitive Skids spotlight story (the poor guy was just about ignored by the cartoon series), though it's also notable for the infamous carwash scene.

I really do enjoy the issues that focus on a single, individual character (Bumblebee, Skids, Longtooth, etc.) rather than groups of characters (the Aerialbots, the Triggerbots, etc.) I know it's essentially a toy commercial either way, but at least when they're advertising one individual toy at a time, you get that more narrow character focus. It's impossible to ever get a real feel for, say, Long Haul when he's always surrounded by five of his buddied who are all hogging the spotlight.

My take on the Ravage situation was that Budiansky had dropped him down the mine shaft with the intent of effectively writing him out of the comic. Furman was probably flipping through the early issues, realized the Ravage thing never really got resolved, and thought it would be fun to bring him back.

Shame that Herb wasnt regular TF artist instead of Perlin.

My guess would be that Ravage was written out to make room for Ratbat. Pure speculation, but still...

Ah yes, the infamous issue #20. Indeed, i remember Charlene in the cut-off shorts quite well!

But i digress...i do have to say that the weird vendetta the Lamborghini guy had against Skids seems extreme. If he were a real van, the owner could probably have him locked up a LONG time for his road rage

I like that Jake Dalrymple gets to be nice at the end. His heroic sacrifice of his beloved Lamborghini reminds me of Augie Cahnay’s unexpected bravery in “Trans Europe Express,” driving his Simultech car into Menasor’s head. Of course, Augie could have requested a portion of the proceeds of the Pearl of Bahudin to cover the cost of replacing his car, and asked for another ride from Bluestreak instead of walking home from Turkey...I’m not sure how Jake, Fran, and Charlene are getting back to town! Maybe Jake has a carphone and can call Wendell’s cousin for a tow?