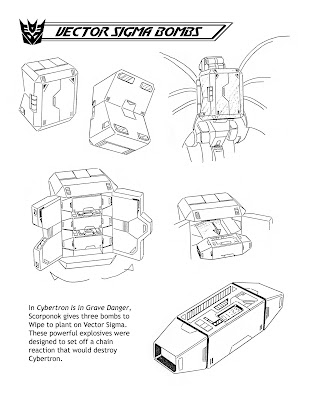 As promised, more models that tie in to Brian's examination of Takara's Headmasters series. For the past two weeks, he's been reviewing the two-part series that literally blew up Cybertron, turning it into a burnt out husk of a world. This week, the Ark Addendum brings you the actual mechanism by which that was accomplished.

These three bombs, and their special backpack, were given to Wipe by Scorponok. The unusual design appears to be a concession to Wipe's anatomy. The bombs themselves are nothing much to look at, but must have packed a pretty powerful wollup given the chain reaction that they set off.

One thing that always struck me as particularly poignant about this two parter was Galvatron's reaction to the idea. Though he is admittedly not the most consistently written character, leaving aside the transition from Season 3 to Headmasters, it's nice that he was actually heroic in his attempt to save Cybertron. I can't help but think that rushing to his doom in a failed attempt to save his homeworld would have been a better end for the character than his actual fate, crushed under some ice thanks to Headmasters holding hands.
Posted by Jimtron at 8:02 AM

Astute observation about Galvatron... and it would have been poetic for both Rodimus and Galvatron to be written out of the show in the same episode, the passing of the old guard, but perhaps the HM writers felt that Galvatron was too popular or too much fun to let him stay dead.

I mean, HM soon became dominated by Fortress and Zarak, and while the latter is a cool, sneaky bastard, neither of them really light up the screen in the same insane fashion as Galvatron!

Agree completely about the Galvatron sentiments. Either kill him off in a cool way, such as him trying to save Seibertron, or keep him around if he's too much fun to write off. But they kept him around for only a few more episodes, and his ultimate demise was pretty lame.

Although it did open up the possibility of his return one day. Which he did in Battlestars: return of Convoy. The BonBon magazine actualy shows Super Megatron crawling out of the ice that Galvatron disappeared in.

You know... his "ultimate demise" leaves a possibility that he survived that one aswell.

I mean if he could survive exposion that devastated Cybertron... could be that it was his canon that exploded and not him...

What's overlooked is that Galvatron's return also opened up the possibility of Cybertron's return. Perhaps there was an off-screen analogue of the Plasma Energy Chamber revitalizing the planet alá Season 4 of the US series. Thus Cybertron could return for Japan's Beast Era with no problems.

Granted, this is only a fan's speculation.