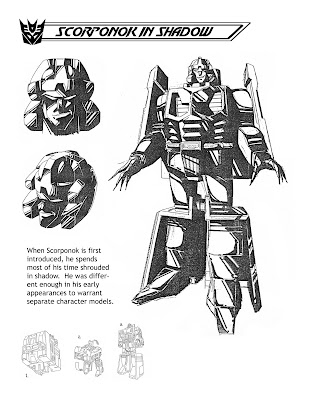 It's time for another page from The Ark Addendum. Continuing my Headmasters theme, I thought I'd take advantage of Brian's Easter holiday from reviewing to play a little catch-up.

In Headmasters, Scorponok spent most of his time sticking to the shadows when he was first introduced. (A quick note - the small headmaster figure, that which was called Lord Zarak in the US, was called Scorponok in Japan. The larger figure, called Scorponok in the US, was called MegaZarak in Japan.) Rather than just draw in shadows to the existing model, he received a whole new shadowy design, probably to make him look scarier. Let's face it, Scorponok's basic design just isn't all that creepy. I also included his transformation, such as it is.

A quick note - I never had a chance to clean these models up, so there is quite a lot of noise. I beg your indulgence.
Posted by Jimtron at 8:54 AM

Very cool, I had no idea they had separate models, but it makes sense seeing as how Zarak spent the first third of the series in the shadows.

And I promise to have another HM review on the way soon! :)

That's pretty awesome that their were separate model-sheets just for that. I know in manga & anime they sometimes exaggerate different characteristics, things like a characters height & build to increase menace for example. VERY cool model-sheet, thanks for posting.

Yes. A lot of the material suffered from this sort of degradation, though generally I went through and fixed it up as much as I could. A lot of the stuff from The Rebirth, for instance, had lines so faded that they had to be completely reworked.

Tis all lovely, are we going to be seeing an Ark Vol 3 anytime soon? Would love to see some early Beast Wars designs.

Beast Wars, though, doesn't really lend itself to this style of book. The characters don't really have static models like this. Instead, I'd need the computer files and software to process them.

I suppose there is always the possibility of doing something like The Ark: The Beast Era, but that would have to focus on BW II/ BW Neo. Is that something there is any interest in? What would I even call it? Should I keep the 'Ark' branding or do something new?

Seems to be that a Beast Wars book would almost have to be called "The Axalon." :)