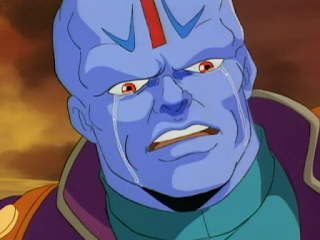 "Exo-Fleet can send 'em anywhere it wants, so long as Venus is kept pure. We're not inhuman!"

Ultimatum is the thirty-first episode of Exo-Squad, and wraps up the long-running Liberation of Venus arc in a not-particularly neat package. While visiting a recovering but badly wounded James Burns, Marsala is kidnapped by the Venutian resistance. They use him as a bargaining chip to try to get any and all Neo Sapiens in the Exo-Fleet rounded up and taken off Venus. When Nara confronts her brother, he admits to having suspicions as to who is involved and attempts to free Marsala on his own. His efforts are interrupted by Neo Sapien holdouts attempting to take the resistance caves for their own use, resulting in a three-way firefight between Able Squad, Neo elements, and the resistance. A dying James removes the unconscious Marsala, bringing him to safety before finally expiring himself. 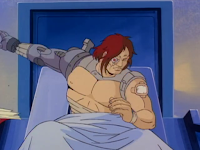 What Works: Almost everything about this episode is terrific. This is the first major character death we've had since Captain Marcus, and James is a wholly sympathetic figure. Despite plenty of foreshadowing (his drive to get Draconis remains as strong as ever), it still manages to catch you by surprise because of how much development he continues to receive. Having him survive the Battle of Vesta but broken seems like a plot that could have been explored in the background of another dozen episodes.

James' determination burns brightly. He gets shot out of Marsala's e-frame twice and both times crawls back in. Kudos to the director for really making you feel how badly this guy gets hurt and keeps on going. It's an amazing force of will, and Michael Donovan nails the performance. I was familiar with his work as the character Ryouga in the Vis Ranma 1/2 anime dub, a similarly driven (if much less tragic) figure. 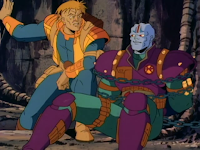 This is easily the most exploration of racism the show manages to deliver, and it's a show where this theme gets much attention paid (albeit through allegory.) Kruger's dialog strikes just the right balance of familiar and science-fiction and lunatic. "Venus must be cleansed of all Neo Sapiens once and for all. You can't trust any of the Sapes. Who knows what they're plotting in their programmed brains?" Delightfully, Marsala out-argues his captor when the ranting begins. "Go ahead, resort to violence, but it still won't make you right." 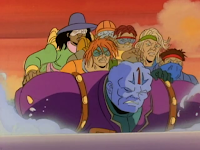 It's interesting to see that the Venutian resistance didn't really do well in the context of peace. Interesting and totally believable. These guys are used to being independent fighters, so the idea that they'd go rogue resonates. I love watching six of them attempting to dog-pile Marsala... unsuccessfully! We won't be seeing them again, presumably because they're all going to be locked up. It's a rather neat way to deal with the question of what happens to them after the war.

Marsala really shines this episode. He's articulate, caring, and heroic. Witness him picking up a live shell and tossing it back at the Neos; that's hardcore. 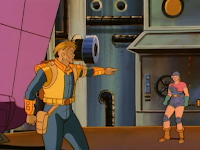 Those are the big-picture virtues of the episode, though there are also a surfeit of wonderful little touches. I love the design work this episode. One very minor character that I noticed was a Venutian resistance sympathizer who attempted to flood Nara out of the pipes under Vesta. She's so awkward, and yet it works.

Speaking of those pipes, there is a terrific bit of foreshadowing where you see a fountain sputter and die while Marsala surveys the ruined Venutian landscape. After Nara gets flooded out, we see the fountain come back to life, and you suddenly realize exactly how the Resistance got in and out of Vesta undetected. 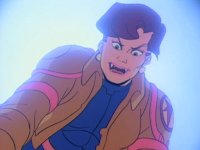 The episode kicks off with J.T. having a nightmare about Noretti. Given just how creepy the last episode was, it's nice to see that he's having some trouble dealing. 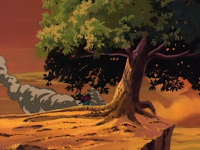 Per my review of Sabotage, the Snake Tree is back. James promised Nara he'd meet her with Marsala at the tree and he delivers, even though it literally kills him to do so.

It's a tiny touch, but I love the design element of Nara hooking up her suit to activate a light. A subtle thing, to be sure, but the kind of element Exo-Squad excelled at that makes the tech feel real.

Oh, and speaking of small elements, Kroger meets his end by being crushed by debris from a Neo shooting at him... mere moments after attempting to crush Marsala's skull with a rock himself. Fitting irony, and I do love the symbolism of his aggression and rage getting stripped down to caveman levels. 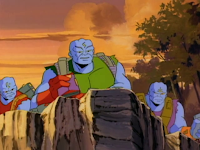 What Doesn't: Little things here and there. I thought the nascent Neo resistance had been adequately dealt with last episode, and moreover thought the Neo attack at the end split the focus. I'd have been happier had this element not been included. And, strategically, I didn't buy that there was anything special about the caves to make them worth fighting over. I'd think the Neo resistance would want to dig into an uncontested spot and save their firepower for targets with a high pay-off. 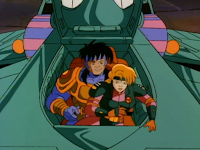 Nara climbing into Takagi's Exo-Frame and his tone-deaf quip feel out of place in such a serious episode. I suppose if she'd had her own ground-support frame it'd have been too easy for her to catch James, but it took me out of the episode for a moment.

Watch For: James is gone but, unsurprisingly, his presence will continue to be felt, especially for Nara.

The shot of J.T. waking up from his nightmare will get recycled late in the series. 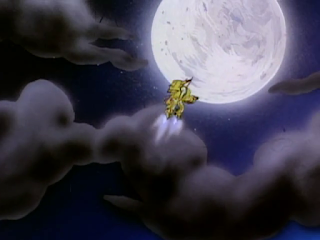 Bio: Alec DeLeon gets the treatment this episode. He's not particularly prominent, but they get major points for the all-new animation. The moon factors prominently into his bio, some (perhaps unintentional?) foreshadowing for the end of the season.

Overall: Terrific episode. A satisfying and logical conclusion to both James and the resistance that feels poised to push Nara's storyline further. Deals with deep themes (racism, soldiers without a war) without ever making them feel childish or cartoonish. Really strong stuff!
Posted by Jimtron at 11:18 AM